How will the new tax law affect you?

With the passage of the new tax law in December, everyone is wondering how they will be impacted. Well, it's complicated. Every family in America has a different financial situation based on income, existing savings, where they live, where they work, the makeup of their families, and so on. To help assess the impact, we've compiled a list of important changes in the law that may affect our customers. These include a reduction in the corporate tax rate, new tax brackets, higher standard deductions, the deductibility of state and local taxes, real estate taxes, and changes to the Alternative Minimum Tax (AMT).

The corporate tax rate has been reduced from a maximum of 35% to a maximum of 21%. The goal of this reduction is to make U.S. companies more competitive versus their foreign counterparts as well as spur job growth. It also may eliminate reasons for U.S. companies to relocate operations to other countries.

Compare the former rate brackets to those that became effective Jan. 1, 2018. There are still seven brackets, and for a majority of taxpayers, tax liability will be reduced. However, their marginal rate may be lower or higher. You can roughly calculate how much of your income will be subject to each tax bracket and what the marginal tax rate will be on your last dollar of income using the charts below. 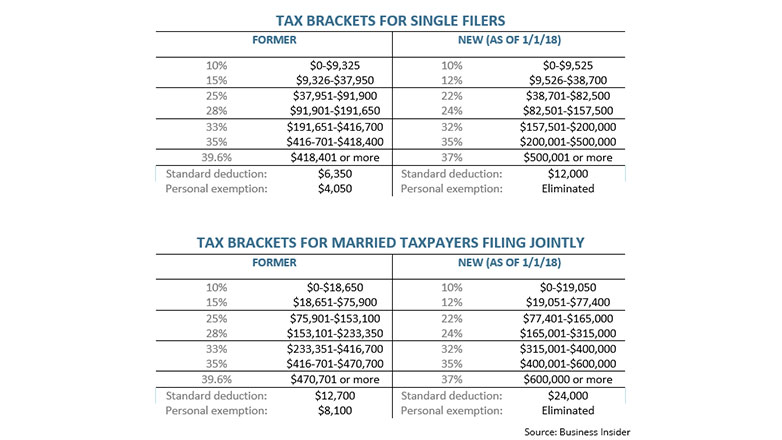 Standard Deduction and the Personal Exemption

For families with more children, the change is more dramatic. The child tax credit is increased in the new law to partially offset this problem. But it may not be a full offset for some. The credit is only for children who are 16 or younger at the end of the tax year. Be aware the credit begins to phase out at $200,000 of income for an individual and $400,000 for a joint filer return (fully phased out at $240,000 and $440,000, respectively).

The new tax law limits the combination of state and local income taxes and sales and property taxes to $10,000 starting in January, 2018. This means that for most tax filers in states with high state income tax rates and areas with high property taxes, filers could reach the maximum deduction limit of $10,000 and then not be able to deduct a portion of their income, sales or property taxes on their federal returns.

As an example, Wisconsin's highest state tax rate is 7.65%, and Arizona's is 4.54%. In both of these cases, it is likely that high income earners will pay enough in taxes that they will reach the maximum cap of $10,000, especially if those people also own homes on which they are paying property taxes.

The alternative minimum tax (AMT) rules are being modified so fewer taxpayers will have to pay the AMT. The AMT was originally created as a way to ensure that people who earn a high income in any given year cannot eliminate most or all tax liability in that year with a high number of deductions. Over time the tax has drawn in millions of middle class taxpayers because the original AMT brackets were not adjusted annually for inflation.

The IRS says that 4.4 million Americans paid the alternative minimum tax in 2015. The AMT reduces the ability to deduct state and local income taxes, mortgage interest on home equity loans, medical expenses and various other business expenses. Under the old rules, the AMT could begin to affect a tax return for a single filer at $120,700 of income or $160,900 for a married couple filing a joint return. The new tax law increases those income levels to $500,000 for an individual and $1 million for a married joint filer return.

This could create an interesting situation. Currently, a taxpayer with income above the AMT threshold who lives in a state with a high state income tax and/or pays high property taxes may be paying extra federal taxes due to the AMT rules. Under the new tax rules, there may be a cap on total federal deductions for state and local taxes and property taxes; however, if a taxpayer has been subject to AMT, they were losing the ability to take a portion of those deductions anyway. Taxpayers who have been subject to AMT may find that not being subject to AMT any longer offsets a portion of the cap in deductions under the new tax law.

The estate tax exclusion is being doubled, to $11 million for individuals and $22 million for couples. Only a small percentage of estates ever hit the threshold requirement to pay estate taxes with the existing limits, so the new limits could eliminate estate taxes as a concern in estate planning for most.

There is also a big change to 529 education savings accounts, making them more flexible. In the past, money invested through 529 plans could only be used for college expenses. Beginning in 2018, these plans can be used for primary and secondary school costs as well, up to $10,000 per student per year. Until now, parents looking to save money for grade school expenses usually used Coverdell Education Accounts. Those accounts will still be available but will likely be used much less going forward.

In addition to the tax changes we have cited above, there are other items that taxpayers may want to explore, such as changes for business owners who qualify for pass‐through income, the ability to deduct charitable contributions, and changes to Roth IRA re‐characterization. The new tax law may largely eliminate the “marriage penalty.” This placed a two‐income earning couple into a higher tax bracket than each of the individuals would have been in if they had stayed single and filed separate tax returns.

Finally, there are important things in the tax code that will remain the same:

So what do you need to do to determine how the tax law will affect you? In simplified terms, look at the following: