Concerns over slower global economic growth due to the spread of Coronavirus Disease 2019 (COVID-19) have led to a precipitous decline in stock prices and bond yields (bond prices rise when yields decline). Many are relating the stock market decline to the potential severity of an economic slowdown, concluding that a global recession is in the offing. We believe it is too early to make that assumption and therefore may be difficult at this point to determine if the economic recovery post-epidemic will be U or V-shaped.

There have been more than 83,000 cases of COVID-19 reported. It is certain that there have been more cases than those identified, however. Because the virus has never been seen before, there is no vaccine yet. The chart below identifies the confirmed cases in Hubei Province, China, epicenter of the outbreak, the rest of mainland China and the world. 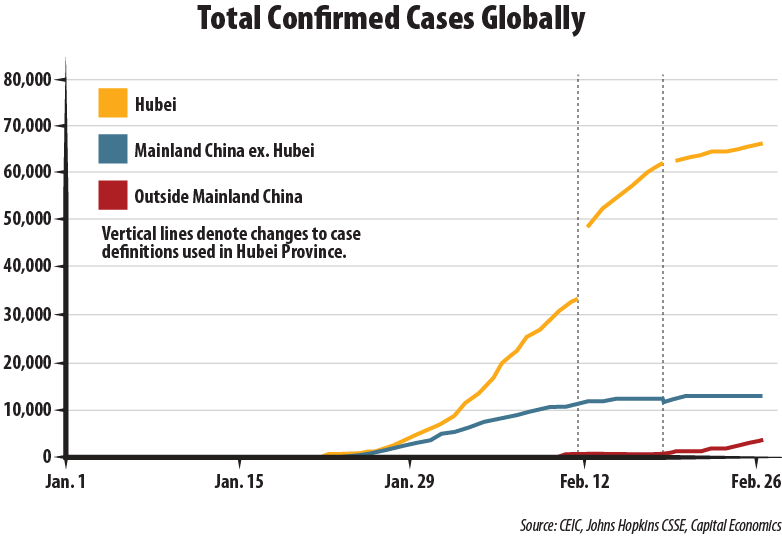 We know the outbreak has reduced economic activity in China and are beginning to see its impact in other parts of the world as well. The chart below provides evidence of just how dramatic the reduction is, measuring passenger traffic via road, railway, flight and ship within China after the Lunar New Year. You can see that since Feb. 14, activity has slowly begun to pick up. 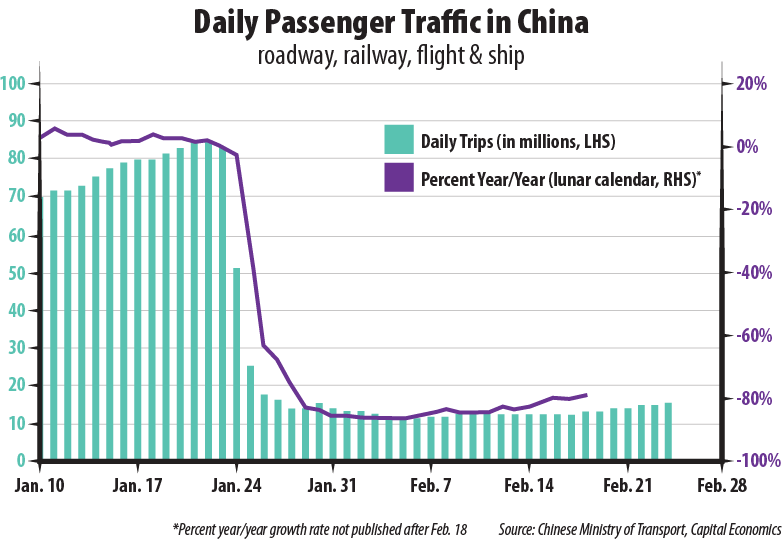 The slowdown in global growth is concerning for two reasons. First, the rate was expected to be between 2.5 and 3.3% this year, and China accounts for almost a third of that number. Many have compared this to the 2003 SARS epidemic; however, at that time, China accounted for less than 10% of global growth. Also, China’s larger role in global growth and the manufacturing supply chain has created significant concern for investors, who are worried that companies’ earnings growth will be so significantly hampered that earnings may be flat for 2020 over 2019.

The spread of the virus beyond China into South Korea, Japan, the United States, Italy and many other countries has led to concerns over more containment initiatives that reduce the movement of goods and people.

What’s Happening to Stocks and Bonds?

Because last year was a low earnings growth year (S&P 500 earnings grew by less than 0.3%) and stock prices advanced more than 30%, investors were counting on an uptick in economic growth and a strong earnings growth recovery in 2020. In fact, through Feb. 19, the U.S. stock market had risen another 4% because investors were convinced that lower interest rates around the world would lead to stronger earnings in 2020. The reduction in interest rates and lower perceived risk due to trade resolution in December, a strong retail sales holiday season and rising consumer confidence led to higher stock prices. Of course, the COVID-19 outbreak blew up the notion that market risk had been reduced as it has clouded the view for future economic and earnings growth.

The S&P 500 index is still more than 23% higher since the December 2018 low. That’s after the more than 10% sell-off* of the last five trading days. U.S. stocks had risen a substantial amount on the back of lower interest rates and the hope of better growth this year. Now that outlook is uncertain. Markets dislike uncertainty, particularly when economic growth is moving at a slow pace to begin with. And, in the face of uncertainty, investors reduce risk.

Evidence of investors’ desire to reduce risk can be seen in bond yields. When investors become concerned about risk, they buy Treasuries. We’ve seen 2- and 10-year bond yields decline by .5% and .67%, respectively. The 10-year Treasury yield has moved to a new all-time low of 1.26%! This also means that bond prices have risen. The Vanguard intermediate bond ETF (BIV) has returned 3.45% since the beginning of the year and is up more than 12% over the last 12 months due to the decline in bond yields.

For investors who owns both stocks and bonds, portfolio returns are much better than the stock market alone. For example, if you have half of your money in bonds and half in U.S. stocks, your return this year is closer to -2.5% and, for the last 12 months, still over 9%. We offer this information to put the market’s decline in perspective.

Markets don’t spend much time around their “fair value" – especially when there is more uncertainty surrounding expectations for economic and earnings growth. Still, we have to keep in mind the green shoots we were considering in late December when the market was rallying.

The temporary weakness we’ll see due to the virus would be much more negative if we were already in a global recession. This is not to downplay the potential deleterious effect of COVID-19 on global growth – rather, it is to emphasize that we were beginning to see some strength, which could mean that the economy will rebound more quickly.

In the last 12 months, we have seen more than 80 central bank reductions in interest rates. The U.S. Federal Reserve had reversed course and started adding liquidity in October. In early February, it was reported that more than 225,000 jobs were added to the U.S. economy, unemployment remained near 3.5% and wage growth was near 3.8%.

Yesterday, Starbucks announced that 85% of their China stores have reopened. The Chinese government has announced stimulus programs to lend to small businesses negatively affected by the virus closures, reduced tax rates and increased government spending. The likelihood of further interest rate cuts in the U.S. has risen.

Of course, we don’t know how long the epidemic will last. We will continue to use the measures of activity we have to determine how quickly or slowly economies are returning to their “normal” levels. Because we are moving closer to spring with more cases being discovered outside of China, though, it is less likely that a V-shaped recovery is possible. We believe the global economy will continue to digest the disruption and we will see a slower return to the 3% global growth rate we were anticipating late last year. To be sure, though, the economic supply and demand shocks from reduced travel and quarantines will abate and modest growth will resume. We’ll have to see how quickly that occurs.

*Sound portfolio construction incorporates all aspects of a client’s comprehensive financial plan to arrive at the appropriate level of risk for their goals and objectives. Sell-offs are part of the built-in assumptions and should not have a material impact on the long-term success of a plan.