In the last week, the stock market has been weak. In fact, it is now in negative territory for 2020. In particular, as news that the coronavirus hitting China has spread beyond its borders, we’ve seen a downward acceleration in stock market weakness. Because global economic growth has a tenuous hold on positive territory, any threat that may slow it creates risk aversion in markets. While not yet defined as a pandemic, the question becomes what kind of detrimental effect may this outbreak cause?

The coronavirus, so named for the spikes on the virus, causes respiratory illness and most affects people with other co-morbidities, the elderly and the sick. To date, more than 2,800 cases have been identified and more than 100 people have died in China. There have also been several cases identified in the U.S. and Europe.

Comparisons to past pandemics, such as the Spanish flu (so named for the Spanish king who came down with it, even though it originated in China in 1918), have been made. That virus killed more than 20 million people worldwide. Of course it is much too early to make such comparisons. Still, as China has closed several cities of 10 million plus, the threat to life and economic growth is real. The current outbreak might be better compared to the SARS outbreak in the early 2000s. There were more than 8,000 sick people and some 774 deaths attributed to the outbreak, according to the World Health Organization.

It is too early to determine the impact of this outbreak. The Chinese government is responding, and while some say late, it is likely that they attempted to control news of the outbreak for several weeks while they worked out the plan. Closing a city of 10 million sounds daunting in the U.S.; however, that is a small city in China, a country of more than 1.3 billion people.

It is also the Chinese Lunar New Year. This is the most important time of the year for tourism in the country when everyone travels to be with family. Restricting travel will create a slower first quarter economic growth rate. Again, while it is too soon to know what the overall impact will be, it is likely it will be worth only a tenth of a percent or two.

To be sure, markets have weakened, and the news of the virus has only added to the sell-off.  One could argue that the market has been looking for a reason to sell off because it has gone almost straight up for several months. Gains like those we’ve seen in the last several months like to be consolidated through a sell-off and then a subsequent rally. This is a pretty normal process.

Because stocks have made new highs (the Dow Jones Industrial Average was above 29,000), a sell-off of 2 or 3 percentage points makes for good headlines. “Dow falls 870 points!” Well, that’s 3%, not much given the 30+% rally over the last 12 months!

As you can see from the chart below, it is not unusual for the Treasury bond market to rally when an event like this happens. This chart from Goldman Sachs provides the yield change on a 10-year Treasury, days before and after the announcement of an outbreak. In each case the pattern is the same. Yields decline as investors seek safety and then move back to previous levels as the real information is sorted out. 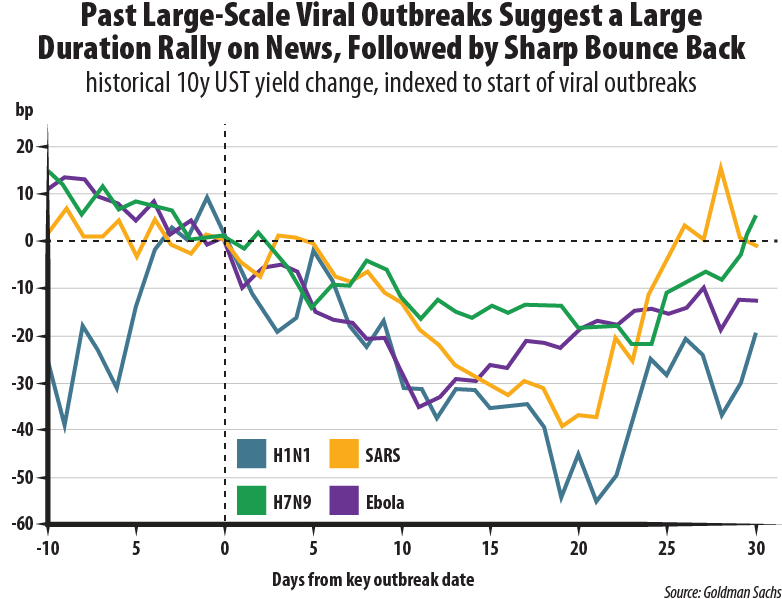 The table below shows how stocks have performed for the six and 12 months after an outbreak. As you can see, in most cases, the market impact of the outbreak news was minimal.

The point of this is to say that with a global economy growing near 3%, a slowing Chinese economy and a U.S. economy growing at 2%, any bad news is likely to rock investors’ outlook.

Given the stock market’s appreciation of the last 12 months and lack of consolidating those gains, using the coronavirus outbreak is also not that surprising. We will continue to monitor the news and markets and adjust our course accordingly. That includes looking for opportunities to reduce risk if necessary or taking advantage of situations that a risk-averse market presents.