Last week, I participated in a corporate retreat located in far northern Wisconsin. During the retreat, we heard that there is science supporting the importance of being outdoors for our physical and mental health. Exiting the car, among the pines, sniffing the air, I would say that I have to agree. My attitude changed and I could see more clearly. While discussing how to manage change and create a thriving, sustainable business, I also had time to ponder the current market environment and how to position ourselves for it.

Stock investors are presented with a conundrum. On the one hand, the bond market is telling them that the economy will slow enough to cause the Federal Reserve to lower interest rates, which means equity investors should get defensive. However, getting defensive usually means buying value stocks, which tend to do poorly late in an economic cycle – which is where we happen to be.

As a result, investors are becoming wary of the future potential for economic growth, yet feeling like there is nowhere to hide.

From our perspective, the negativism being assigned to the economy is overdone. While trade issues may have a dampening effect on growth, we are convinced that growth will remain near the U.S. decade‐long average real growth rate of 2%.

Many use the Atlanta Federal Reserve Bank's GDPNow forecast as a rationale for pessimism. This is meant to be a real‐time survey of the economy's potential for growth. As you can see from the chart below, it has consistently predicted slower growth than the Blue Chip consensus forecast. Blue Chip Publications produces a forecast based on leading economists' views. You can see that these are quite a bit better than GDPNow. It is important to keep in mind that both of these forecasts change about as often as the weather forecast during a North Woods retreat. 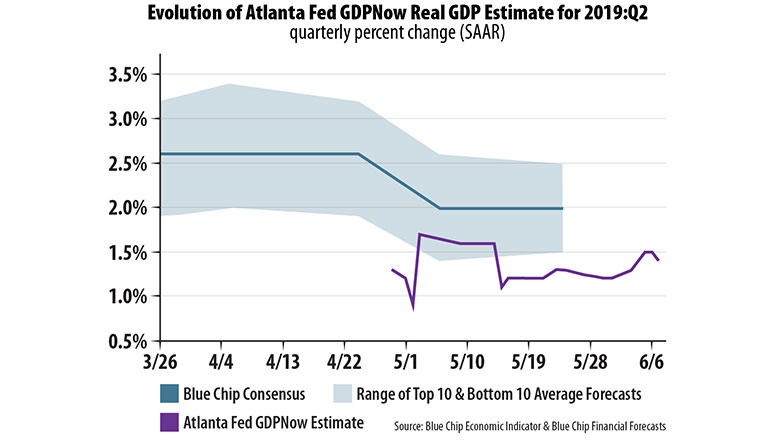 But I digress. Back to stock investors. While forecasting economic growth is difficult, it is a key input to how investors view the growth rate of future earnings over the long‐term. However, while economic growth expectations have declined, the stock market remains near its all‐time high. Stock investors seem to be ignoring the potential for slower growth, as long as they see the decline in interest rates and the potential for a continued easing of the interest rate environment by the Federal Reserve.

As interest rates have fallen, the multiple of earnings investors are willing to pay has risen since December. You can see this in the chart from Yardeni.com below. Stocks traded for as much as almost 19 times earnings before dropping to less than 14 times in December. Since then, they recovered to 17 times before dropping back to their current 16.4 times level. 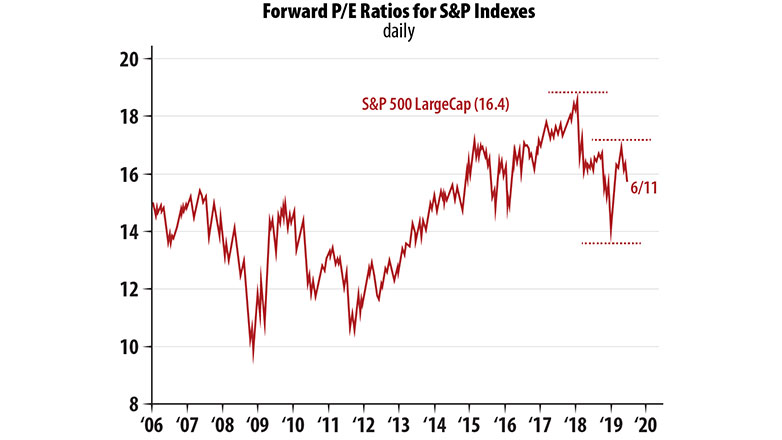 At the same time, the consensus earnings forecast hasn't changed much. At the end of March, the S&P 500 Index companies were expected to earn $165.50. At the end of May, expectations were for $165.38. This is how we know that what is driving stocks is the expectation, telegraphed by the bond market, that short‐term interest rates will decline as the Fed begins its cuts. Longer rates have already fallen. As an example, the yield on a 10‐year Treasury has declined from over 2.5% at the beginning of the year to a low yesterday below 2%.

That low in the 10‐year yield was a function of the Fed's announcement yesterday. It did not announce a rate cut, much to President Trump's chagrin. However, the Fed did indicate that it is more likely to reduce interest rates than raise them and perhaps as early as when it meets next month. The Fed is concerned about weak inflation and the potential reduction in growth from trade tensions.

So if analyst estimates for corporate earnings are stable, why is the bond market telegraphing a substantial slowdown in the economy and pushing the Fed to lower short‐term interest rates? It is somewhat a function of the low growth, low inflation environment we've been living in for some time.

Recall the period from mid‐2015 to mid‐2016. Bond yields declined by 100 basis points, or 1%. The yield on a 10‐year Treasury went from 2.38% to 1.38%, our cycle low yield. The stock market declined by 14% from mid‐2015 to early 2016. This was a function of an outright recession in the industrial sector of our economy. Since the Fed was already at 0%, it was not able to lower rates and in fact began raising them in December of 2015 given that it saw a more positive outlook for the economy.

U.S. economic growth as measured by real GDP sank as low as .4% at the end of 2015 from a high of 5% just a year earlier. Global growth, however, began to pick up due to stimulus in China, and U.S. economic growth rallied as well. By mid‐2016, we were back above 2%. In past posts, we've talked about the significant stimulus China has undertaken during the last 18 months and the potential for positive impact.

As mentioned earlier, when our average growth rate is only 2%, it doesn't take much to derail expectations and get people worried about the future. Using the perspective gained in the North Woods, we believe that the recession drum beat is overdone and the bond market, like 2016, is now ahead of itself.