Webster’s defines recovery as “overcoming a deficiency or shortcoming” while recovering is defined as “a return to a normal state.” This may be an interesting differentiation as we think about the economy’s current and future states as influenced by the pandemic.

A “return” to normal would suggest that things were indeed normal pre-pandemic. There was little normal, however, about this combination:

What we’re seeing and continue to hope for is a recovery—in the sense of “overcoming a deficiency or shortcoming”—from the economic damage caused by the pandemic’s global closings. And on that score, we’re seeing improvement in the economic data suggesting, that a recovery is beginning to happen.

Germany is Europe’s largest economy and the most reliant on exports. To the extent that Germany is seeing a recovery in economic activity, and manufacturing in particular, then we know the global economy is beginning to heal.

China is Germany’s third-largest trading partner, with over $107 billion of trade in 2019. (The U.S. is Germany’s largest, with almost $133 billion last year). Because China is experiencing a vigorous recovery, as discussed in last week’s presentation, it is providing an engine of growth for Europe’s exporters as well as much of Asia.

This may be why Germany’s Chancellor, Angela Merkel, was a vocal proponent of the $800-plus billion stimulus package passed by the European Union last week. All in, the stimulus plans passed by central banks and governments around the globe total almost 30% of global GDP.

The chart below provides some insight into Germany’s recovery and is good evidence of the global economic recovery despite the resurgence in COVID-19 cases. 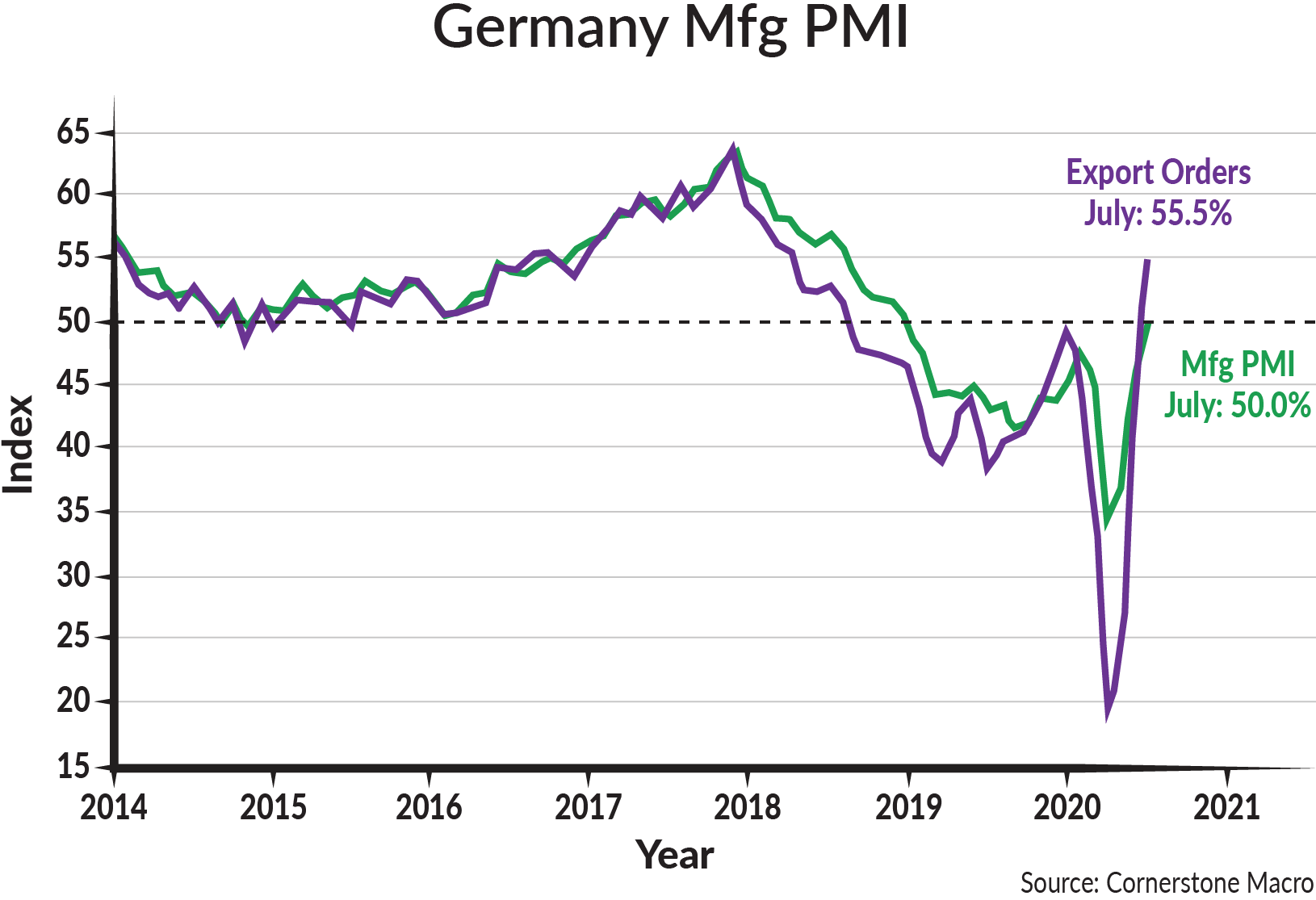 What About Here at Home?

This week, orders for U.S. durable goods were reported 7.3% higher than the prior month. That represents almost $207 billion of activity, which is well below the $240 billion average run rate pre-pandemic—but well above the low of about $165 billion earlier this year.

Durable goods represent those items that have a longer useful life and larger expense. Examples include transportation equipment such as planes and locomotives, as well as consumer goods such as computer equipment, cars and furniture.

Improvement in this data suggests that businesses and consumers are beginning to feel more confident about the economic recovery. The chart reflects the strength of the recovery and the reason some may refer to it as “V-shaped.” 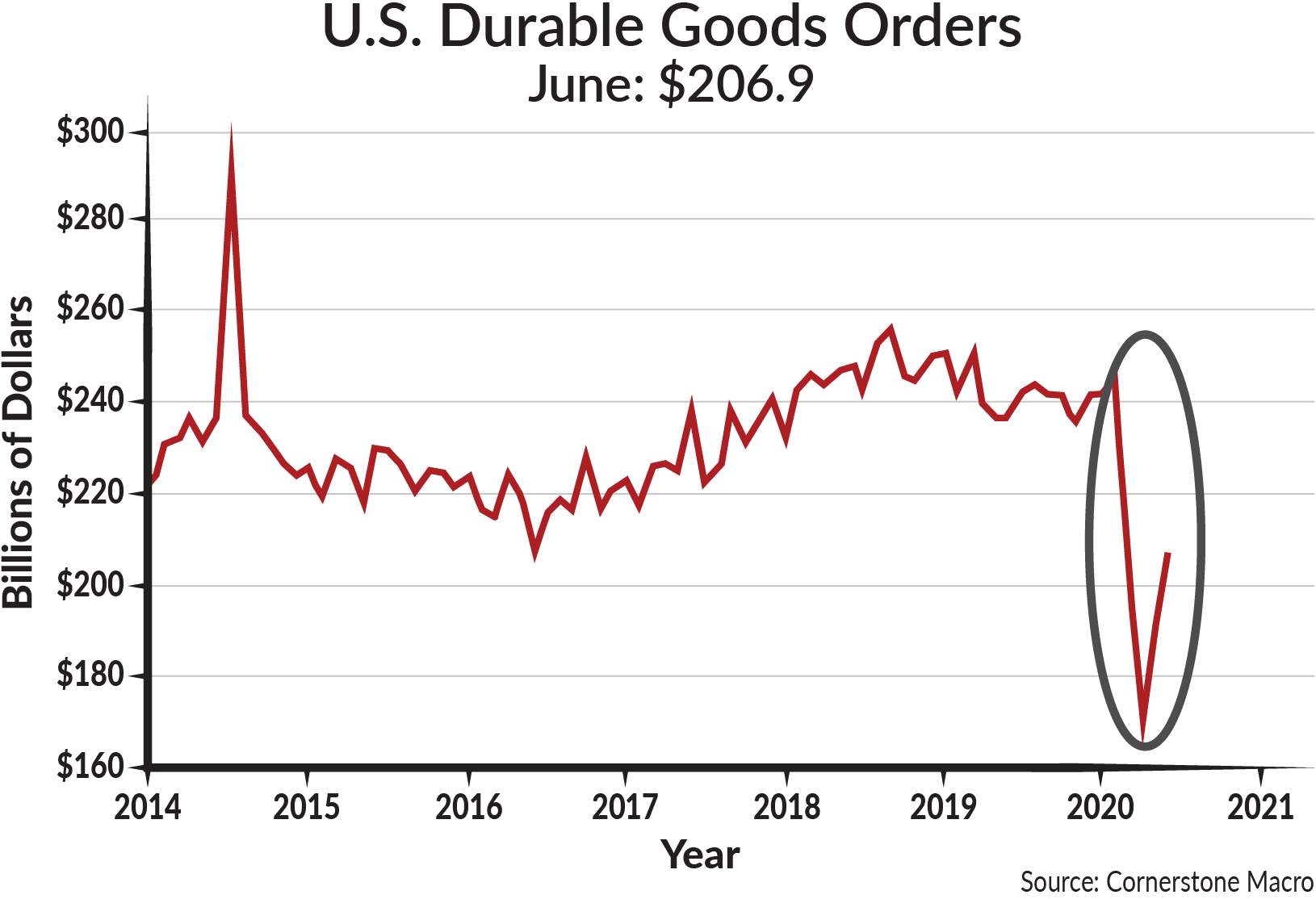 However, we are not saying the recovery will be steadily higher. We don’t think you can expect a V-shaped recovery of durable goods orders to persist. It is likely that we’ll continue to see mixed results from the economic data, including durable goods, over time. We do not, however, expect nationwide or global re-closing similar to what we experienced in March and April. Closings and other retrenchment are more likely to be regional and rolling, leading to uneven recovery data.

A recovery is what’s beginning. Recovering will likely take much more time and may power the latter half of this decade…but returning to the pre-pandemic “normal”—which wasn’t actually the least bit normal—won’t come any time soon.