The last time the Federal Reserve raised rates by 0.75 percentage points after a meeting, as it did this week, was 1994. The environment we’re in today bears some similarities; however, it’s mostly very different. Understanding the rationale for the Fed’s change in plans so close to this week’s announcement provides some insight into what’s happening and why.

With the rate hike, the Fed Funds rate now stands at a range of 1.50% to 1.75%. In addition, bond investors have decided that the Fed will likely raise rates well past 3%. The expectation for the end of this year is 3.4%. This was not a complete surprise to markets. The below yield chart for the two-year Treasury shows how the market anticipated the higher increase after last Friday’s Consumer Price Index (CPI) figure and the University of Michigan Inflation Expectations report. The two-year yield rose from 3.06% to more than 3.4% over the weekend. 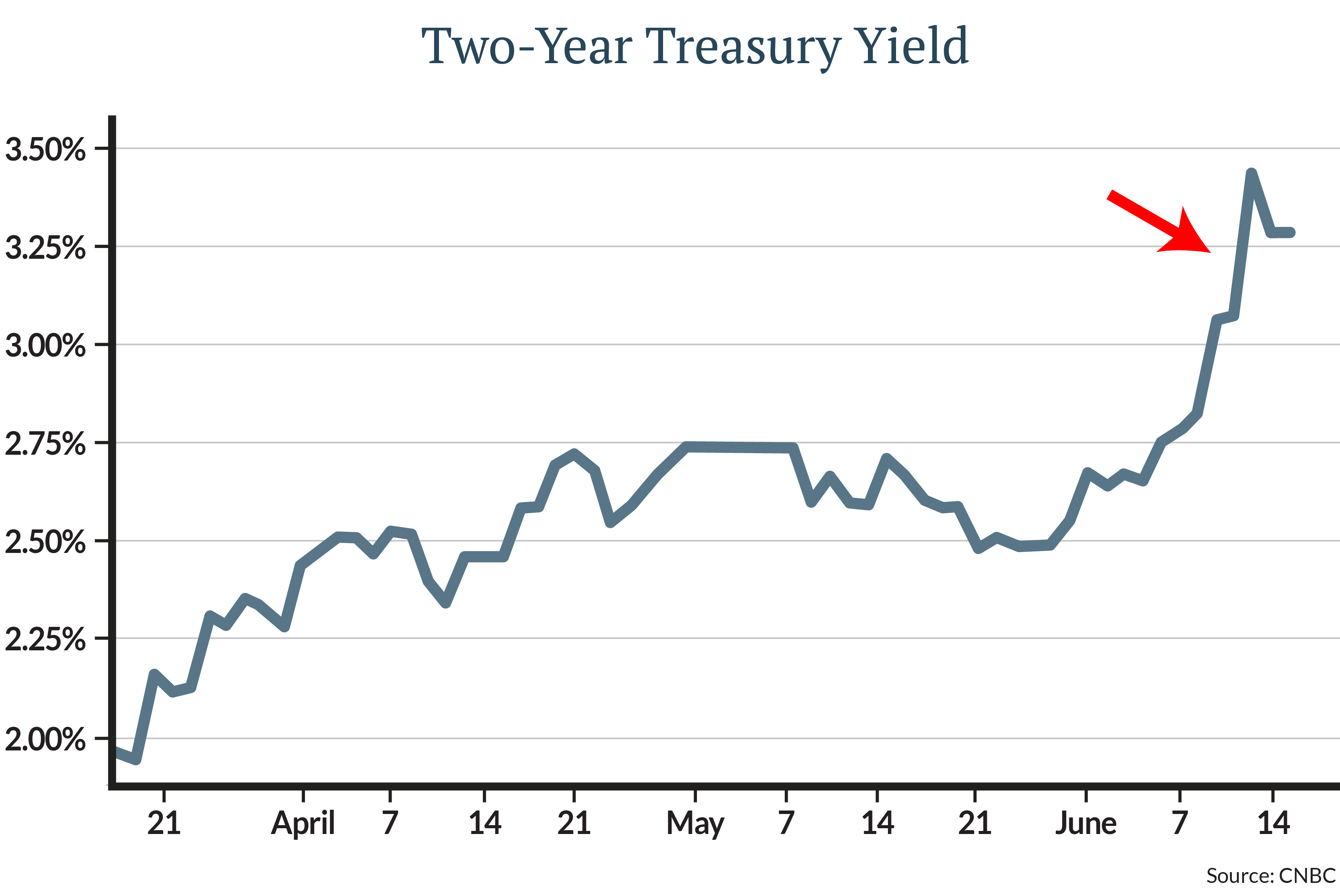 We use the two-year because it is a good reflection of how bond investors believe the Fed Funds rate will look two years from now. You’ll also note that if we go back to the beginning of May this yield was closer to 2.75%. However, what we do know is that a two-year Treasury yield provides a much better return to bond holders than the 0.21% yield we had last fall.

There is some debate as to whether or not this most recent hike indicates the Fed is chasing inflation or trying to get ahead of it. Make no mistake, it is chasing…and that makes it more difficult to determine where rates will land 18-24 months out. This is very different than 1994.

Then, the Fed Chair was Alan Greenspan. He was a dyed-in-the wool inflation hawk and began raising interest rates in 1993 when inflation was below 3%. You may recall that the economy began booming in the 1990s. Between 1991 and 1993, growth rose from 2.8% to 6.4%. Over the next several years growth averaged more than 5%, despite the interest rate hikes—a level of growth not seen since, save for a few quarters post-pandemic. 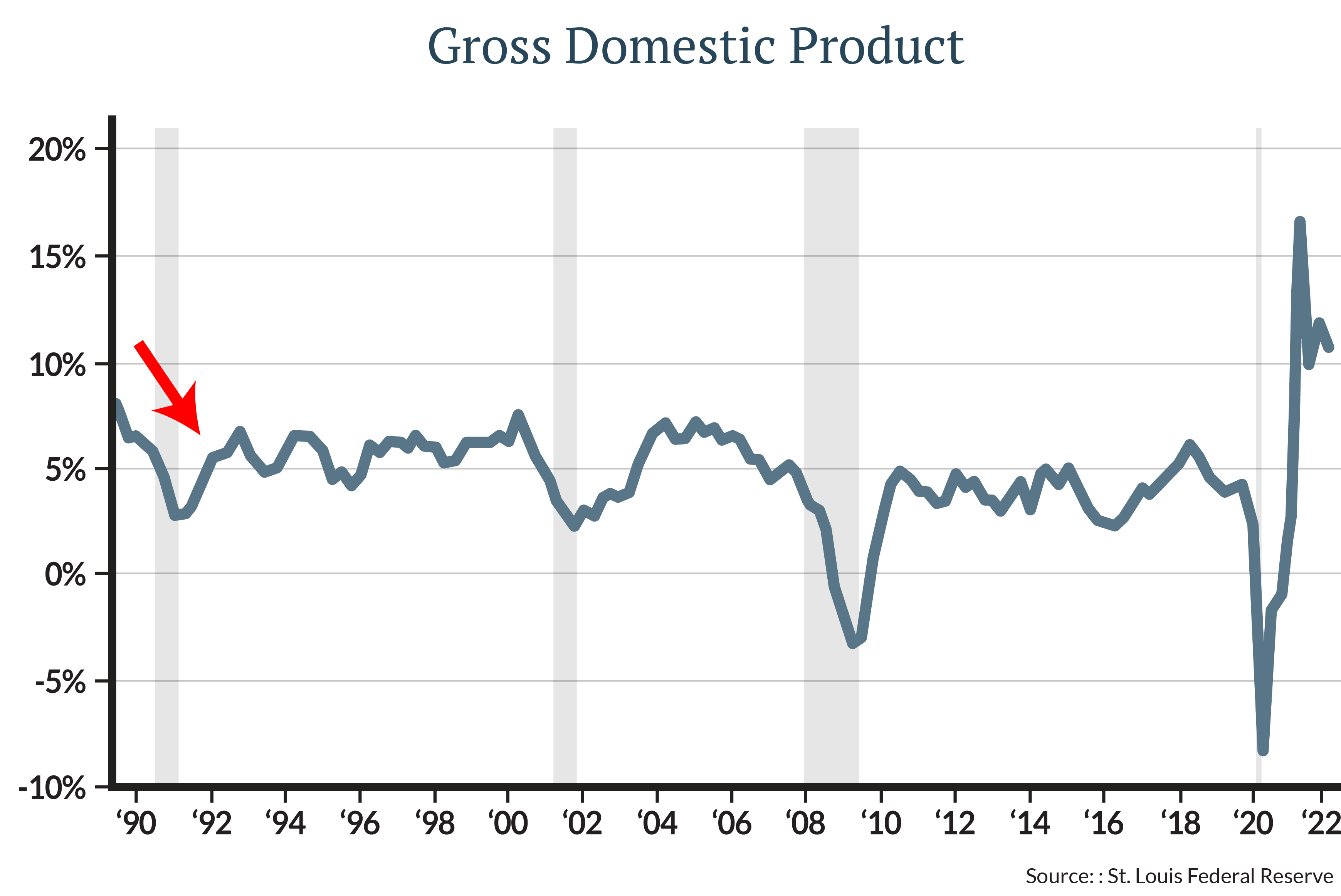 Greenspan began raising rates at the beginning of 1994, much to the surprise of bond investors. He continued to raise rates until Q2 1995, from 3% to 6%. Yet, economic growth continued unabated.

The point of this comparison to 1994 is that Chairman Greenspan understood what happens when inflation expectations get away from the central bank’s policymaking. This is what’s different this time. The chart below is a long look at the University of Michigan’s Inflation Expectation survey of consumers. When inflation expectations rise too quickly, the general market consensus is that consumer behavior changes, making inflation more difficult to fight with higher interest rates.

You can see in the chart that those 1994 and 1995 interest rate hikes took place when expectations didn’t change much. Contrast that to the right-hand side of the U of M chart, showing that expectations have risen from near 2% to over 5%, with a big jump recorded last week before the Fed moved.

We believe this is important for two reasons.

We’ll see if the current Fed Chair has the same luck as Mr. Greenspan in 1994 and future prosperity improves.