I serve as Treasurer of a non-profit where the Board Finance Committee recently met to discuss a large remodeling project for the facilities. I was struck by how adamant most members of the Committee were about the persistence of this high rate of inflation well into the future. Members were certain that both borrowing and construction costs would be higher a year from now. As a result, they wanted to move forward with the project expeditiously.

That sentiment is exactly what the Federal Reserve is concerned about—even more so than the current rate of inflation. Once consumers and businesses are convinced that inflation will remain higher for longer, they change purchasing behaviors. It then becomes harder to slow the economy and reduce the rate of inflation.

The Fed’s toolbox is nearly empty when it comes to inflation-fighting tools. There are only two. The Fed can raise interest rates, increasing the cost of borrowing, to slow business and home lending. And, it has the ability, through monetary policy, to affect the supply of money in the system. This is the oil that makes our economic gears turn smoothly. Less “oil” makes things less smooth.

In July, the Fed raised the Federal Funds interest rate (the short-term interest rate it controls directly) by 0.75 percentage points after raising it by a full percentage point at the previous meeting. The target rate is now 2.5%. Remember, it was near 0% at the beginning of the year. Markets take this to mean that while the Fed may be behind in keeping inflation in check, it means to make up time quickly.

However, stock and bond investors are already beginning to think that interest rates will stop going up in less than a year. Bond yields have fallen, and stock prices have rallied. The 10-year Treasury yield has dropped by nearly ¾ of a percentage point in the last several weeks, while the S&P 500 Index of large U.S. stocks has rallied 17% since mid-June.

Last week we received two important inflation reports: the Consumer and Producer Price Indices (CPI and PPI). When the Consumer Price Index was released, the data looked a bit better than expected. I mean just a bit. CPI was 8.5%, and the core rate (i.e., excluding the more volatile food and energy components) was 5.9%. Both numbers were below the 12-month rate of inflation for June and previous months. The CPI chart looks like this. The July dip suggests to some that inflation has peaked. 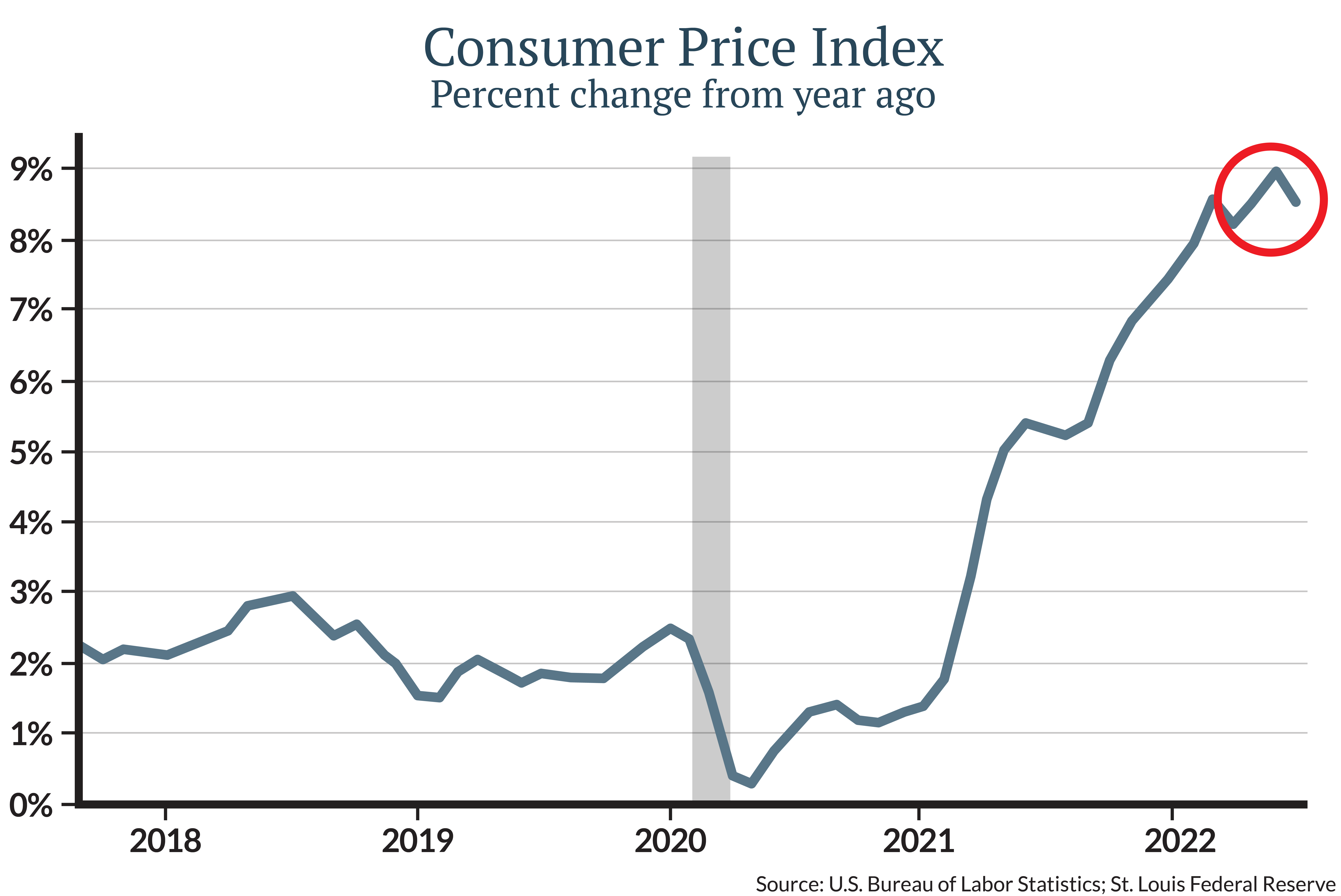 While it may be too early to call the peak, the effects of supply chain issues and higher energy costs seem to be waning. Oil prices have moderated from nearly $120 per barrel to less than $90, a 25% decline. As a result, we’ve seen gas prices move down over $1 per gallon. Furthermore, the cost of shipping goods worldwide has fallen substantially, with the Baltic Dry Index down over 60% since June. The current rate is similar to the pre-pandemic level, suggesting that shipping is easier to come by and supply chains are easing.

The University of Michigan publishes an inflation expectations index that looks at consumers’ expectations for inflation 12 months from now. Last week Friday, the report showed that people expect inflation of 5.1%, down slightly from the previous reading of 5.3%. 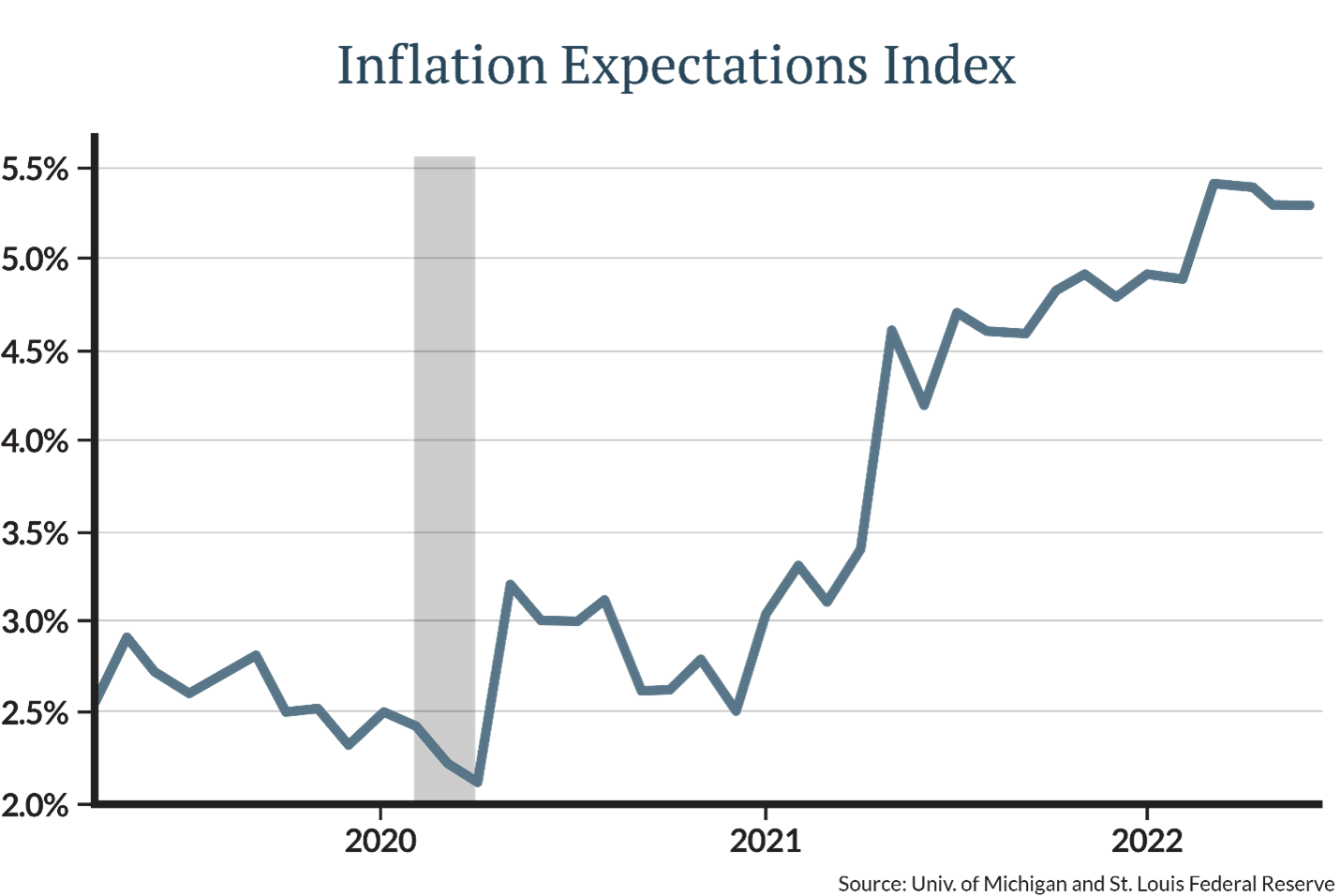 The Fed has indicated it is watching inflation expectations. Given its target level of 2%, the further from that target expectations are, the more difficulty the Fed will have with changing consumer and business behavior.

Note that in the Board Finance Committee meeting for the local non-profit, the table consensus was that inflation will remain above the current level of 8%, well above the U of M survey.

As mentioned earlier, bonds and stocks have rallied significantly since mid-June. While most investors feel the Fed missed its opportunity to hike rates sooner, most of these same investors are now convinced that actions taken now will moderate later this year. Some believe the Federal Funds interest rate could actually start falling early next year.

For our part, we added to equities in June after a decline of more than 20% and recently removed some of what we added. We believe that both stock and bond investors are a bit too sanguine about the inflation picture and the future course of interest rates. We have raised the credit quality of our bond portfolios, reflecting the fact that we think lower earnings growth and profit margins will create a headwind for corporate bonds. We believe inflation will moderate, benefiting from a precipitous fall in commodity prices and clearing supply chain issues. However, the Fed started out behind…and if the Finance Committee experience is telling, the Fed is behind in convincing people inflation will be under control soon.