For investors, the impact of higher rates on housing bears close watching, as housing represents about 17% of U.S. GDP (the economy) when considered broadly—that is, wrapping in residential fixed investment (i.e., construction) and housing services (all those trips to Home Depot or the many hours spent on Wayfair).

This week the Federal Reserve took another crack at raising rates and outlining its path forward, so let’s look at that and how the housing market may play out through 2022 and into next year.

This week the Fed raised rates by half a percentage point, so the Fed Funds rate now stands at 0.75-1.00%. In good news for savers and investors, this rate hike has already translated to money market rates moving higher as well.

The market anticipates the Fed Funds rate will reach over 2.5% by the end of this year. However, Fed Chairman Powell noted that while inflation has run higher than anticipated, the Fed isn’t considering larger-sized hikes (i.e., 0.75% or more) at future meetings. That may be because the Fed has accelerated the pace at which it’s shrinking its balance sheet—a process that’s akin to a rate hike. The target now is a reduction of $95 billion per month as of June.

All of this means the Fed is tightening financial conditions, which will likely lead to slower economic growth. We’ve already seen what this means economically, as evidenced by last week’s GDP report showing the U.S. economy contracted by over 1% annualized during the first quarter of this year.

This is consistent with the Fed’s own expectations for growth to slow this year to near 2%. Unfortunately, that is half the growth rate many expected when the year began—and the big reason why asset prices for stocks have declined.

As you can see in the chart below, the iShares Home Construction ETF (ticker: ITB) is down precipitously (about 27%) since the beginning of 2022. This isn’t surprising because higher interest rates lead to higher home costs, since most buyers use a mortgage for up to 80-90% of the purchase price. 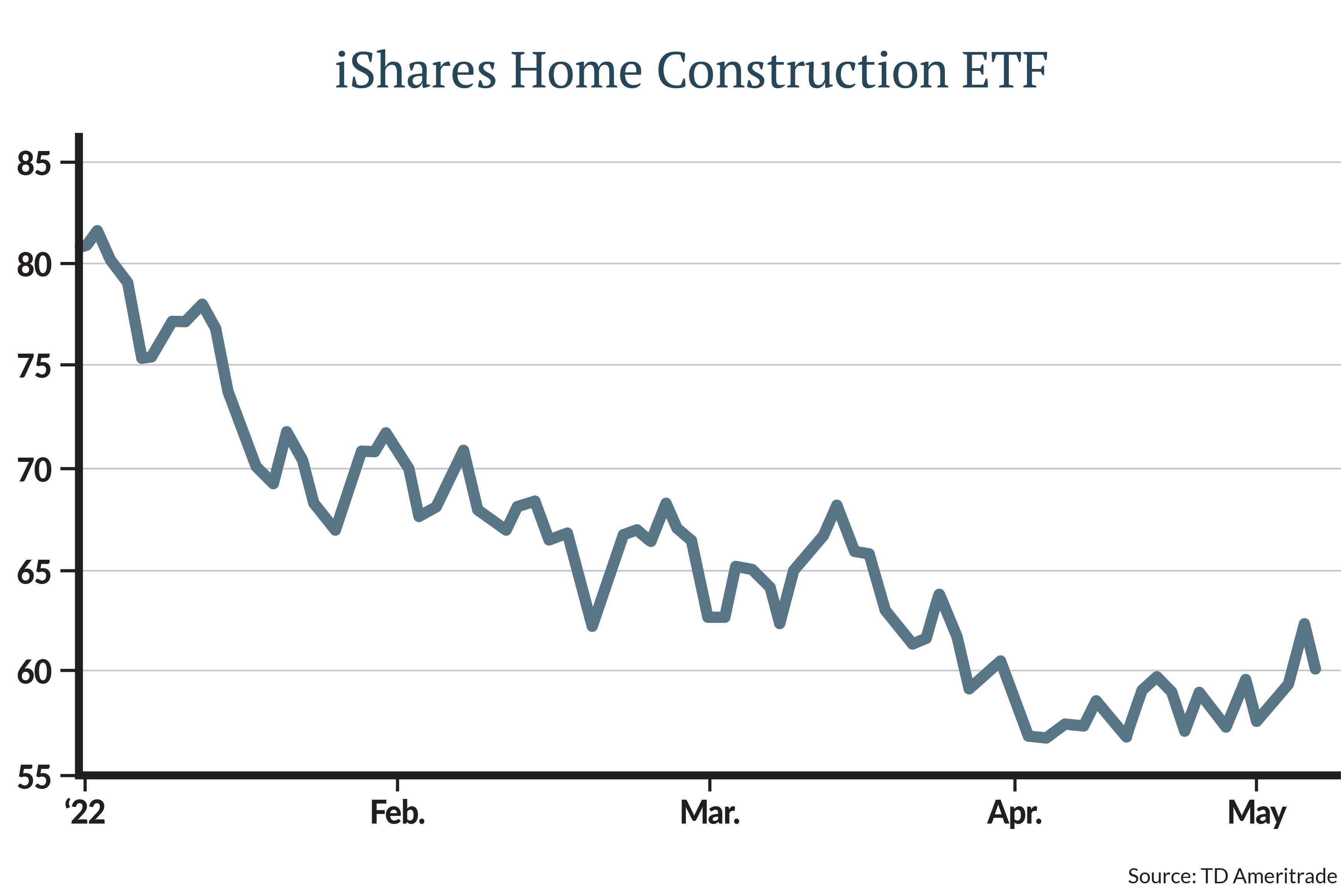 As an example, the cost of a mortgage using the median home price is up over $480 per month since January. Here is what that looks like over the last 20+ years. 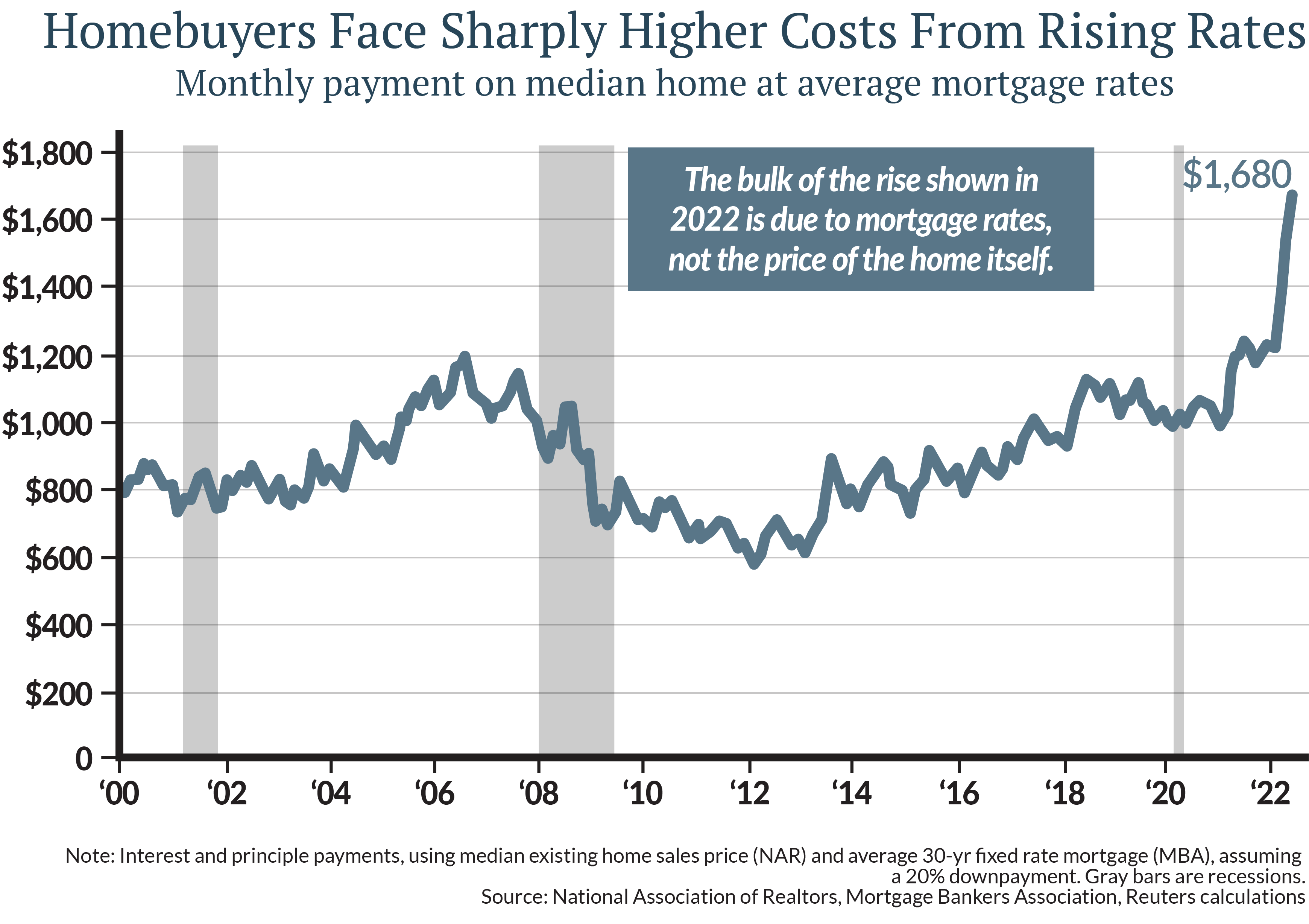 Another factor pushing up the cost of home ownership is the price of housing itself. This is mostly due to a lack of supply. When you look at the chart below you can see that we are at a decades-low level in housing supply…at a time when younger millennials are entering the housing market. 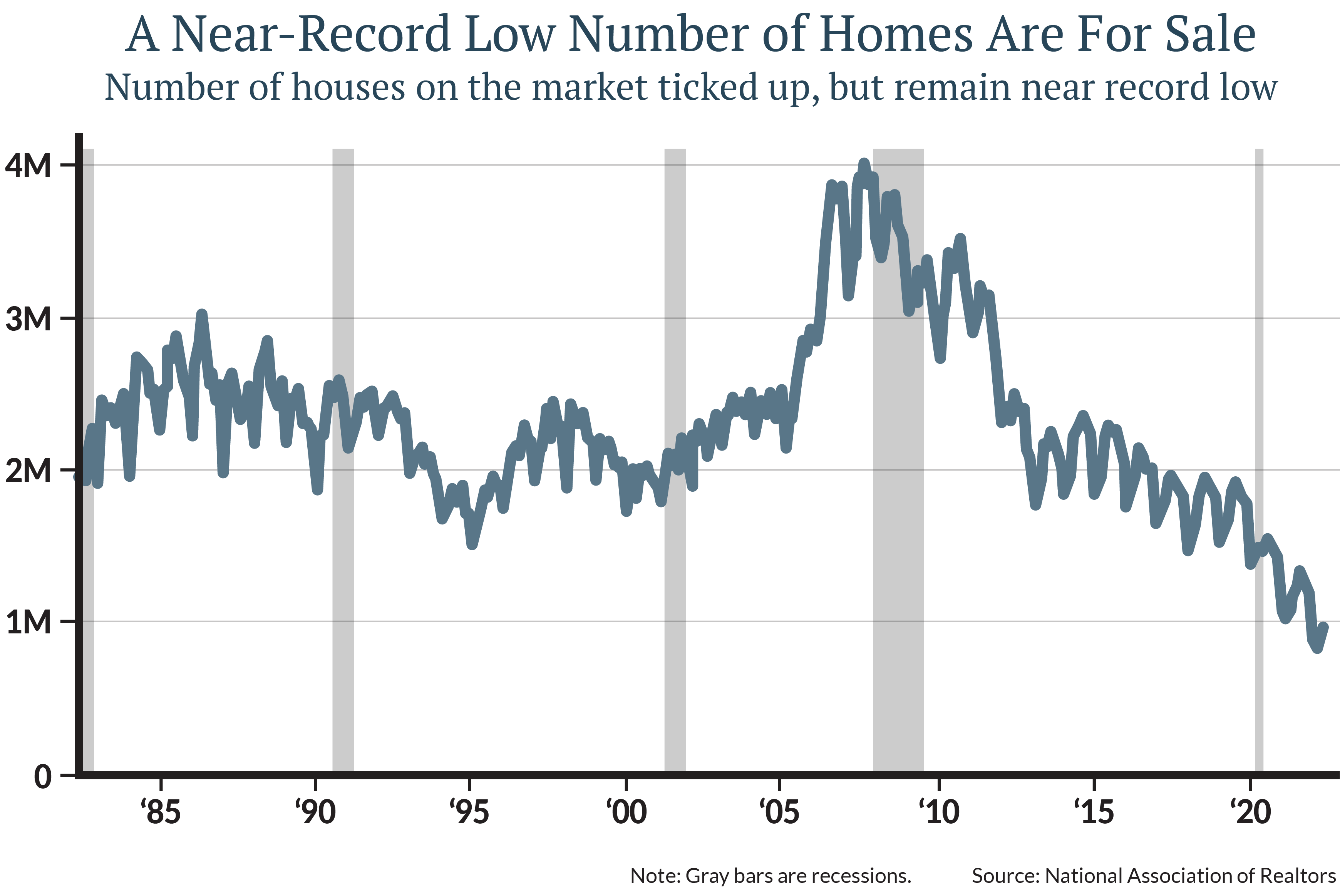 Why make this point?

If housing is 17% of the economy and the demand for housing is growing, that bodes well for an economic recovery. For those of us who remember 10% or 12% home mortgage rates, we would consider today’s 5.5% rate a bargain. Of course, these younger, new home buyers see the increase differently. Still, while near-term demand will wane as buyers digest the higher rates, the millions of new buyers will eventually get home builders to build what works for their budgets. The average square footage of a new home has grown from 1,500 to 2,500 square feet in the last two decades. Perhaps that figure will fall a bit.

As home buyers and builders adjust, home building stocks may actually start looking more attractive. The housing market can and should be a big contributor to the economy’s growth well into the future.

This more positive, longer-term view is hard to see after the Fed’s announcement this week—and amid the constant drumbeat about inflation. Yes, we know interest rates have an effect on the housing market as does affordability. But the bottom line is that while we may not be at the bottom of the cycle, given potential demand we should consider the longer-term economic picture when thinking about how the economy recovers from the current malaise.