Have you ordered your first pumpkin spice latte?

Search “everything pumpkin spice” on Amazon and you'll see a collection of more than 900 search results, including t‐shirts, coffee, spices, jewelry, soap, candles, dog treats, lip balm (you get the idea). Coffee shops bombard you this time of year with pumpkin spice lattes, macchiatos and mochas. Even the micro‐brewery industry has joined the game with pumpkin spice cider and ale. This chart shows a sample of search activity for “pumpkin” in the last month (data from two million sample searches ‐ Quantcast). 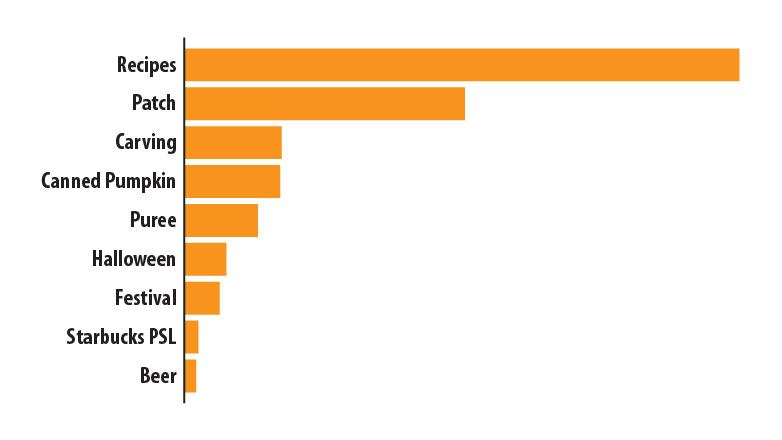 However, sometimes too much of something isn't good. The same holds true with politics and investing.

Thinking too much about politics when making your investment decisions can lead to either paralysis or bad decision‐making. Realizing that we are approaching the one-year mark of the 2020 presidential election and given the current news flow regarding impeachment proceedings, it is easy to obsess about who the next president will be and worry about how that impacts today's investment decisions.

Here are some steps to consider if you're feeling like politics is all that matters when making your investment decisions.

First, take a deep breath. Unlike the Brits (who have their own issues), we don't have a six‐week election cycle. We have more than 12 months to go, and the leader among Democrats will change many times between now and the Democratic convention next August. Also, the current impeachment proceedings may introduce a more serious contender among Republicans, although that isn't likely.

According to Andy Laperriere at Cornerstone Macro (one of our research partners), “At this point in 2003, Wesley Clark led the polls for the Democratic nomination. At this point in 2007, Rudy Giuliani and Hillary Clinton had big leads. In the fall of 2011, Rick Perry led in the polls. None went on to win their respective nominations.” Point being, it's early.

Second, the health of the economy and corporate earnings matter more to asset prices over the long term than politics. Sure, fiscal policy matters; however, that is only when we can get some made. Even when the Republicans had control of both houses in Congress and the White House, they couldn't push through some big policy changes, like health care reform for example. We believe the extreme partisanship doesn't make that kind of coordinated policy change likely. The forces pushing parties to shift left and right aren't likely to change in the next 12 months.

Political uncertainty will continue to create volatility, and that may present opportunity. In other words, politics can create enough uncertainty to cause asset prices to overreact. Prices during this overreaction may move away from fair value and present opportunity to reposition or rebalance portfolios. And, monetary policy (think the Federal Reserve and the level of interest rates) will continue to matter more.

Third, we know what a Democratic president would favor in terms of fiscal policy because we just had one. However, without control of Congress, it seems unlikely that the more expensive aspects of a more progressive agenda will get passed. Still, we can look at the more progressive policies of the current Democratic front runners and determine what might impact our portfolio. Lastly – go buy yourself a nice pumpkin spice latte or ale and think about how you want to enjoy this fall season.