The pandemic’s Delta variant news has people wondering what will happen to the economic recovery. The growth rate for everything from manufacturing to retail sales seems to have slowed. As a result, the stock market has taken a breather from making new highs every day. All this begs the question, have we moved past the peak in economic and stock market performance?

As the chart below suggests, we have seen several mini-waves of infection, each peaking and then showing a decline. We won’t likely see the same peak as we did in January because of the rate of vaccination. To date, over 170 million people have been vaccinated, or 52% of the U.S. population. Seventy-eight percent of the population over age 65 is fully vaccinated. To the extent that this makes up the majority of those most at risk, we have achieved substantive protection.

Still, we have seen a change in activity level due to concerns about the rise in Covid-19 infections, particularly in those areas where vaccinations are lowest. The Delta variant, which is the predominant Covid-19 strain now, has a much higher viral load and so produces a greater number of infections, particularly among those not vaccinated. In addition, in very small numbers, those who have been vaccinated are also seeing a rise in Delta variant infections.

All of this has caused investors to wonder if the pandemic will ever go away, and what impact it will have on the economy’s resurgence. The chart below, provides the seven-day moving average of the number of new infections and the number of people hospitalized due to Covid-19. 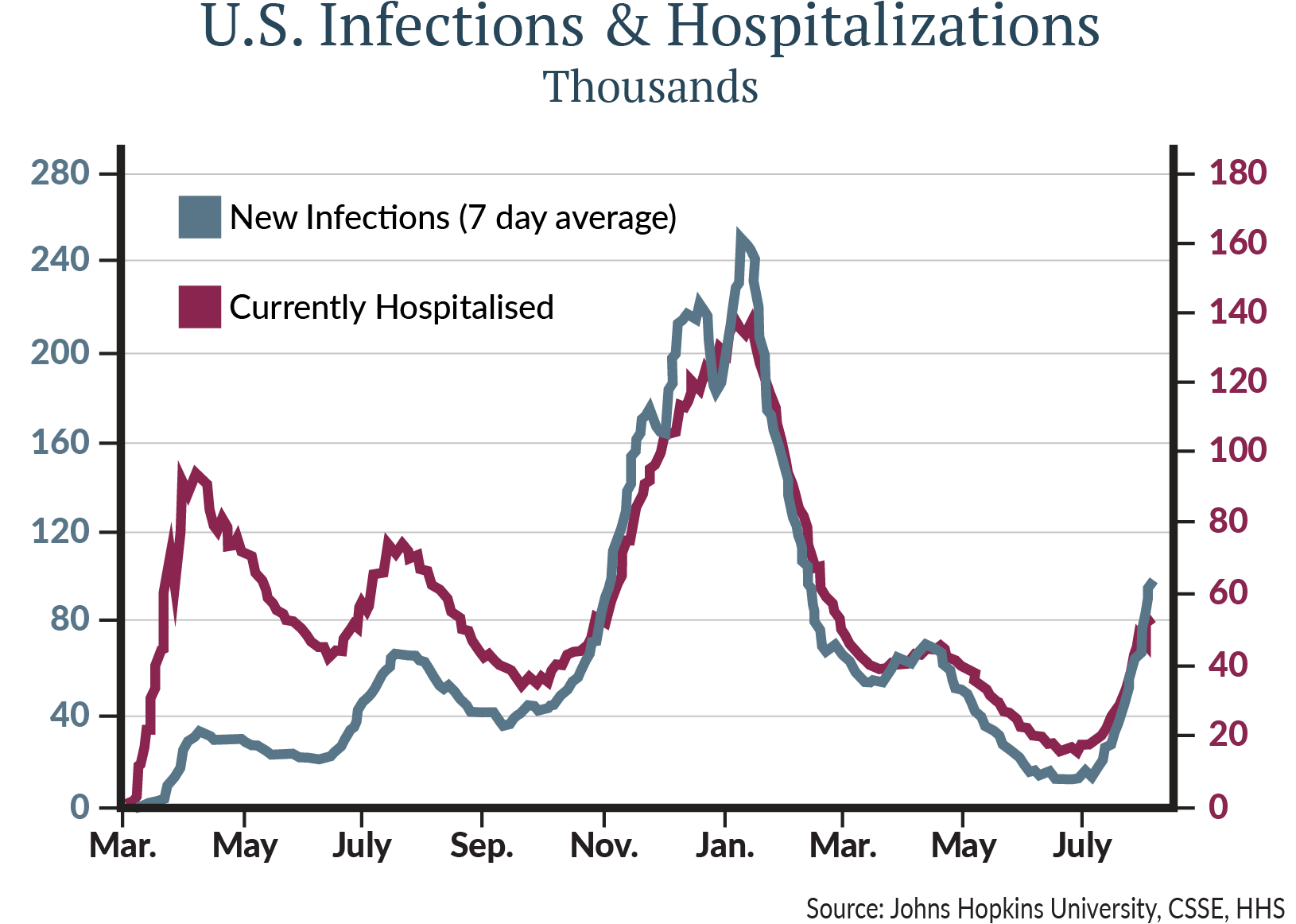 However, as news of the Delta variant has spread and infection rates have risen, reopening stocks have seen a pull-back. Carnival Corp. is down 25% from its high, and Delta Airline is off almost 23%. At the same time, we’ve seen a resurgence in defensive stocks like those in health care, financials and utilities. These sectors are up 35% more than the broad market over the last month.

It is likely that we will see a peak in infections in the next several weeks and that will allay investors’ concerns about a reduction in reopening growth. However, we know that the U.S. is unique as a large country, with a large percentage of the population that is vaccinated. This means two things. We should expect to see additional variants of the Covid-19 virus evolve over time in different parts of the world as vaccination rates vary substantially. And it is likely that vaccination will continue to evolve in terms of how often and what form of virus we are protecting against.

Still, the desire to use a zero-tolerance approach here in the U.S. is clearly not supported, nor would it be good for the economy. The shutdown of 2020 taught policy makers a lot, and we won’t likely revisit that severe approach again with this virus.

While growth stocks have taken a breather, we think above-average growth and a continuing recovery suggests it is too early to pile into late-cycle sectors like those mentioned above.

Despite the increasing rate of infection, we are not likely to see the same dramatic policy prescriptions from the Federal government or the Federal Reserve going forward. Between April of 2020 and the beginning of this year, the Federal government spent over $7 trillion (with a “t”) to support the collapse in economic activity and reduction in incomes, including by helping businesses maintain their payrolls. Given the aforementioned, it isn’t likely that policy makers will close the economy as hard moving forward, so that level of stimulus won’t be warranted. We’ve seen the peak in pandemic spending.

Notwithstanding that comment, we are facing two pieces of legislation that could provide up to $4.5 trillion in additional spending on infrastructure and social programs over 10 years. That means an additional $450 billion per year in spending which would increase the government’s annual budgeted expenditures by about 6.5% relative to 2020’s outlays. While this plan may get a haircut before it is passed, it will provide additional stimulus to the economy.

The Federal Reserve also got into the act last year, keeping interest rates at 0% and providing liquidity to capital markets and the financial system. It continues to do that by purchasing $120 billion worth of Treasury and mortgage-backed bonds each month. This acquisition puts cash in the system. Talk of doing less of this is referred to as a “taper.”

Much has been written about the taper as more regional Fed presidents say that with the economy growing above 5%, there is no need to continue this kind of program. Every time a taper has been discussed, we’ve seen some weakness in stock prices, suggesting that some of the increase in valuations is due to the Fed’s position of creating easier financial conditions through low rates and bond purchases. We’ve probably seen the peak in the Fed’s accommodative approach.

Certainly, to the extent this wanes, markets will adjust. However, we don’t believe this will significantly raise interest rates or create a big selloff in equity prices.

This one is a bit harder. The S&P 500 index has made over 45 record highs in 2021, including another new one this week. However, continuing to make new records will require continued earnings growth that is above expectations, easier monetary policy and strong investor sentiment. For now, we have the first and the last. The market may be able to move higher with only two of the three; however, it will become more difficult.

The test will come when everyone returns to work and their trading terminals in September. Markets have moved higher on good news about the economy, job markets, retail sales and corporate profitability.

It appears we’ve moved past peak economic growth. It may remain above the long-term trend; however we won’t see the high from last quarter. Inflation lags growth, so we may not have seen peak inflation, which means those fears will remain in view.

Stock price performance will likely continue to rotate through sectors based on where people believe we are in the economic cycle. As noted earlier, it may be too early for late-cycle defensive sectors like health care and utilities. Ultimately, investors will be looking for sustainable growth in the face of economic activity that is past its peak.

The answer to how markets will react to our passing some of these peaks will likely become apparent before we reach peak fall color in October.