During the last week, I have had a chance to travel across a good portion of the state of Wisconsin, and wherever you go, you see signs that say “Now Hiring” or “$1,000 bonus for new (insert job title).” It seems that there are many more jobs available than workers. Some suggest that the only reason workers can’t be obtained is the extended unemployment benefits and stimulus checks. However, the recovery from the pandemic has created an interesting challenge that includes stimulus to be sure—but also industry-specific factors and technology innovation.

For investors, tracking the unemployment picture, wage inflation and productivity will provide clues about how the economy recovers from the pandemic…and whether or not companies will be able to generate the earnings and cash flow stock investors are counting on.

Last week’s employment report was a big disappointment, intensifying the debate over fiscal stimulus and its benefits. Let’s tick through some highlights:

From there, it’s useful to review some specific industries, starting with education. The return to schools has been delayed due to mixed messaging from the CDC regarding school safety. As a result, education employment dropped by 19,000 last month. However, the CARES Act had over $45 billion in funding for schools to return so we should see improvement in this area beginning next fall. As a result, the number of people available to return to work should improve, as many currently have children home schooling.

Next let’s turn to leisure and hospitality. Many argue that the number of new jobs was below expectations because workers are choosing to stay home rather than return to work. The extension of unemployment benefits until mid-September and the additional $1,400 stimulus checks, along with dependent-related stimulus, make that easier. In many states, the CARES Act provides an hourly wage in excess of $15 per hour, which is one reason why we’ve seen hospitality-related companies increasing their wage offer.

Still, the leisure and hospitality industry added the most jobs last month (331,000). However, while the industry has added over 5.4 million jobs in the last year, employment is still down 16.8% since February 2020, before the pandemic began.

Finally, consider manufacturing, where employment was down 18,000 in April—although we have seen steady gains in this sector of the economy for almost twelve months. It seems the semiconductor chip problem is impacting employment in the auto industry as it had 27,000 fewer jobs in April. We would expect this to remedy as supply chain issues work through the system, albeit over the next six to twelve months.

The report also provided insight into wage growth, noting that average hourly earnings (AHE) rose by 0.2% month-over-month. AHE can be a volatile number, and so we also monitor the Employment Cost Index (ECI), which is a less-volatile figure because it is only reported quarterly.

However, AHE trends predict the direction of ECI—and the chart below indicates that we’ll continue to see an increase in wages this year. Of course, that puts pressure on companies’ ability to generate earnings, which may create some concern for investors. 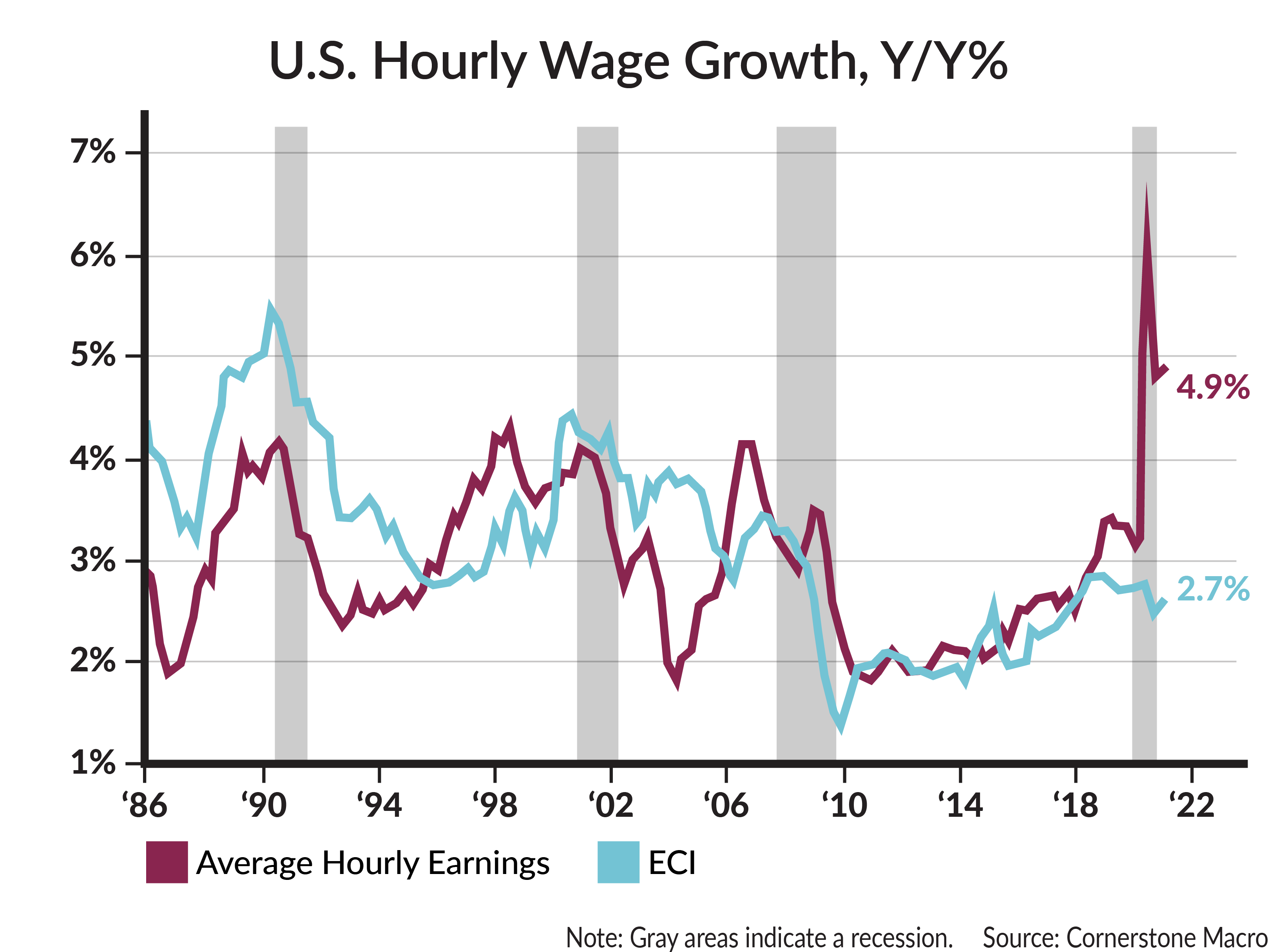 With respect to corporate earnings, one of the best ways to mitigate an increase in labor costs is to increase productivity. This comes from investments in the business. As an example, if a business invests in technology that reduces the cost of production, either by reducing labor costs or using raw materials more efficiently, it is in a position to offset wage inflation that might be created by a tighter labor market as we emerge from the pandemic.

As you can see from the chart below, productivity has been increasing at a rapid rate. Of course, we’ve seen the beneficiaries of the technology investment as noted in last week’s commentary regarding the earnings of some of our largest technology companies. 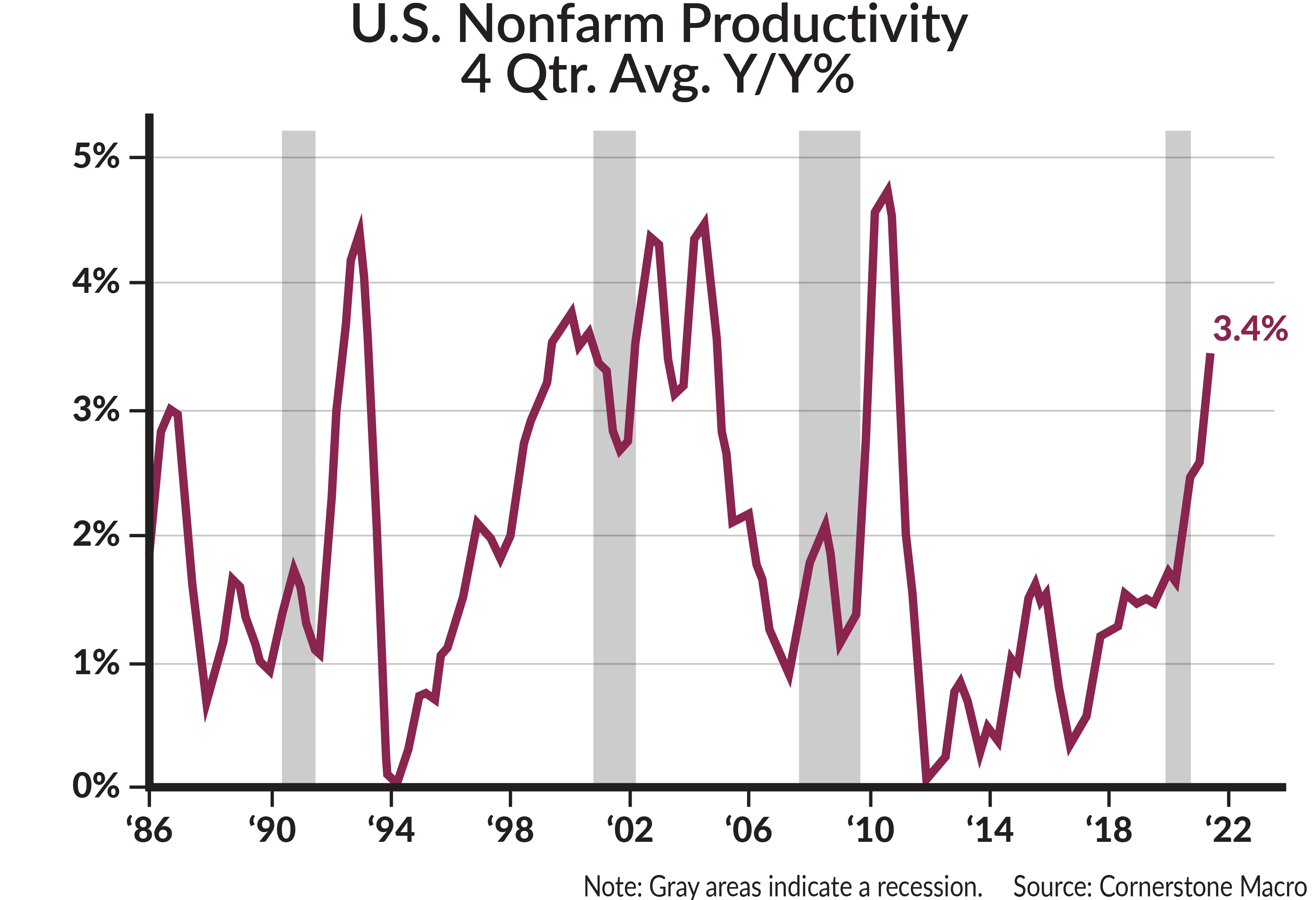 The pandemic’s effect on the labor market and technology investment will be dramatic, perhaps as much so as the government’s stimulus plans.

We expect an uneven recovery, with sometimes dramatic labor shifts in some sectors of the economy, plus innovation on the part of business managers to maintain or recover profitability. All of this will require watching and understanding the impact it may have on our investment decisions.