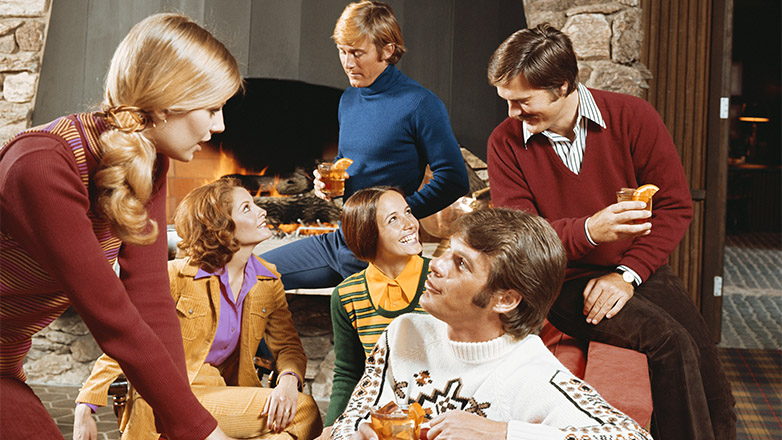 And no, that’s not a group of friends of mine. (I do recall owning a blue turtleneck, though.)

The current level of inflation often prompts references to that decade because we haven’t had inflation run this high since. However, the forces that created inflation then and now are very different. Also, the policy prescriptions aren’t exactly the same—and price discovery is far different.

During the 1970s, inflation averaged nearly 10%. It wasn’t until the Federal Reserve began to raise interest rates significantly that inflation expectations finally began to cool and prices started to fall. Inflation ran high, it is now believed, because of monetary and fiscal policy mistakes in the late 1960s and early 1970s. In particular, interest rates were raised and then lowered several times. It would ramp up and then, upon falling back, stay at a higher level than prior to the last increase. Investors and consumers were convinced interest rates hikes were temporary, and their behavior reflected it.

This chart compares the Federal Funds interest rate (in red) and Consumer Price Index (an inflation measure, in blue) from 1970 through 1981. The three vertical gray bars are recessionary periods. You can see that interest rates were raised and then lowered, and each time inflation moved higher again to a peak of 12.5% and 15% in 1974 and 1980. Finally, in the early 1980s the Fed raised rates to 19%, twice, and price inflation began to permanently decline. 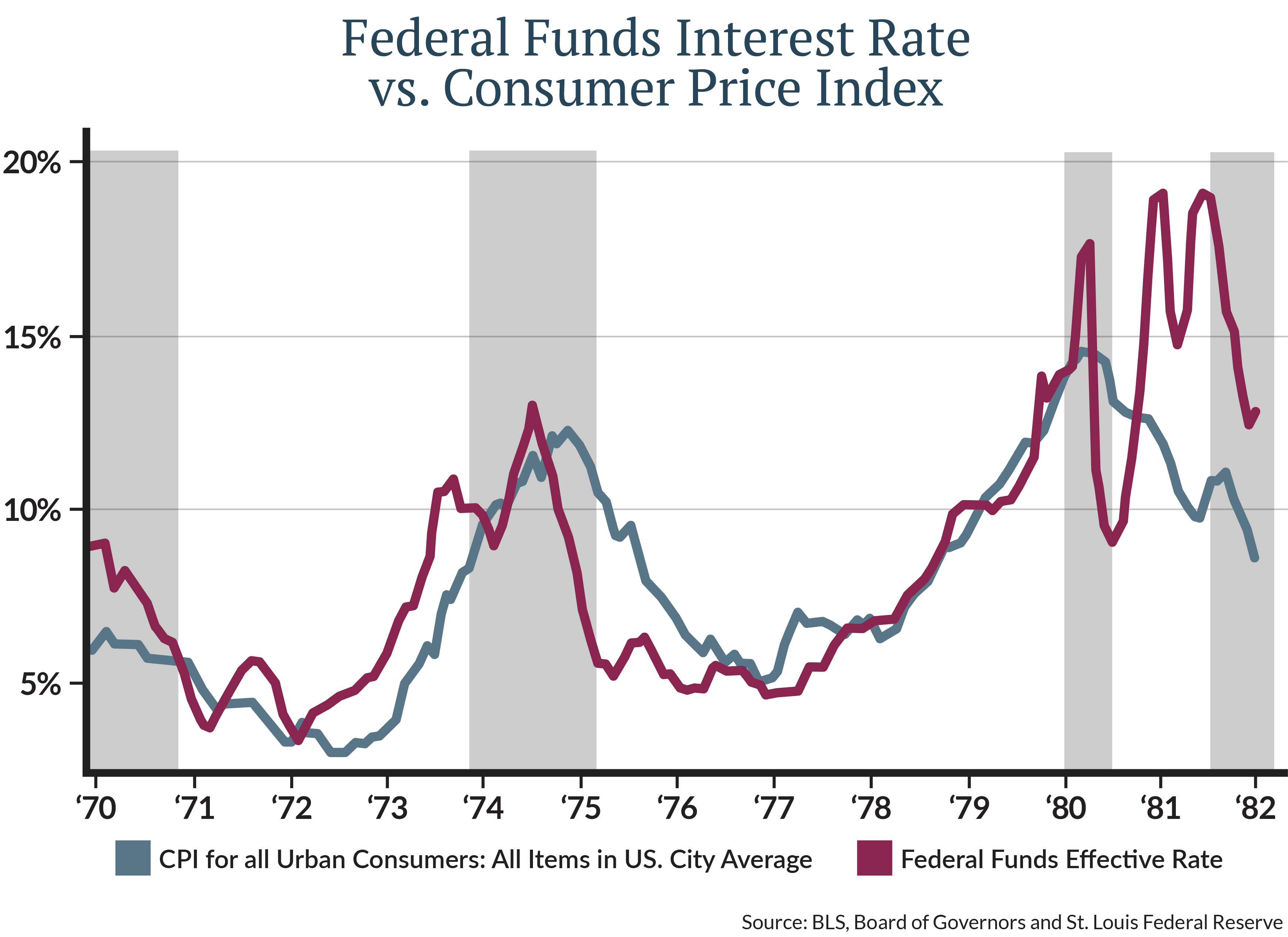 So, does that mean the Fed needs to raise rates just as high now? We don’t think so. For one, the reason for price inflation now is different. While there are many factors, the most important relate to economic issues associated with the pandemic shutdown and reopening. We have said that the pandemic will affect economies for years. Supply chain issues are a good example. During the 20 years prior to the pandemic, much manufacturing was moved to China to take advantage of the lower cost of labor. The pandemic highlighted the problem with having so much of the world’s manufacturing in one place. There was no diversity in the supply chain, and goods that relied on China’s manufacturing and boats to get raw materials there and finished goods back suffered. This created a lack of supply while reopening demand was rising, thus pushing prices higher.

Another example here at home: This week, I read an article about home prices in Boise, Idaho rapidly declining as WFH (work from home) worker demand dries up. This is happening in many cities where people were inclined to move when they could work from anywhere. As you can see from the chart below, prices are still well above pre-pandemic levels; however, they have declined by 17% in just a few months. 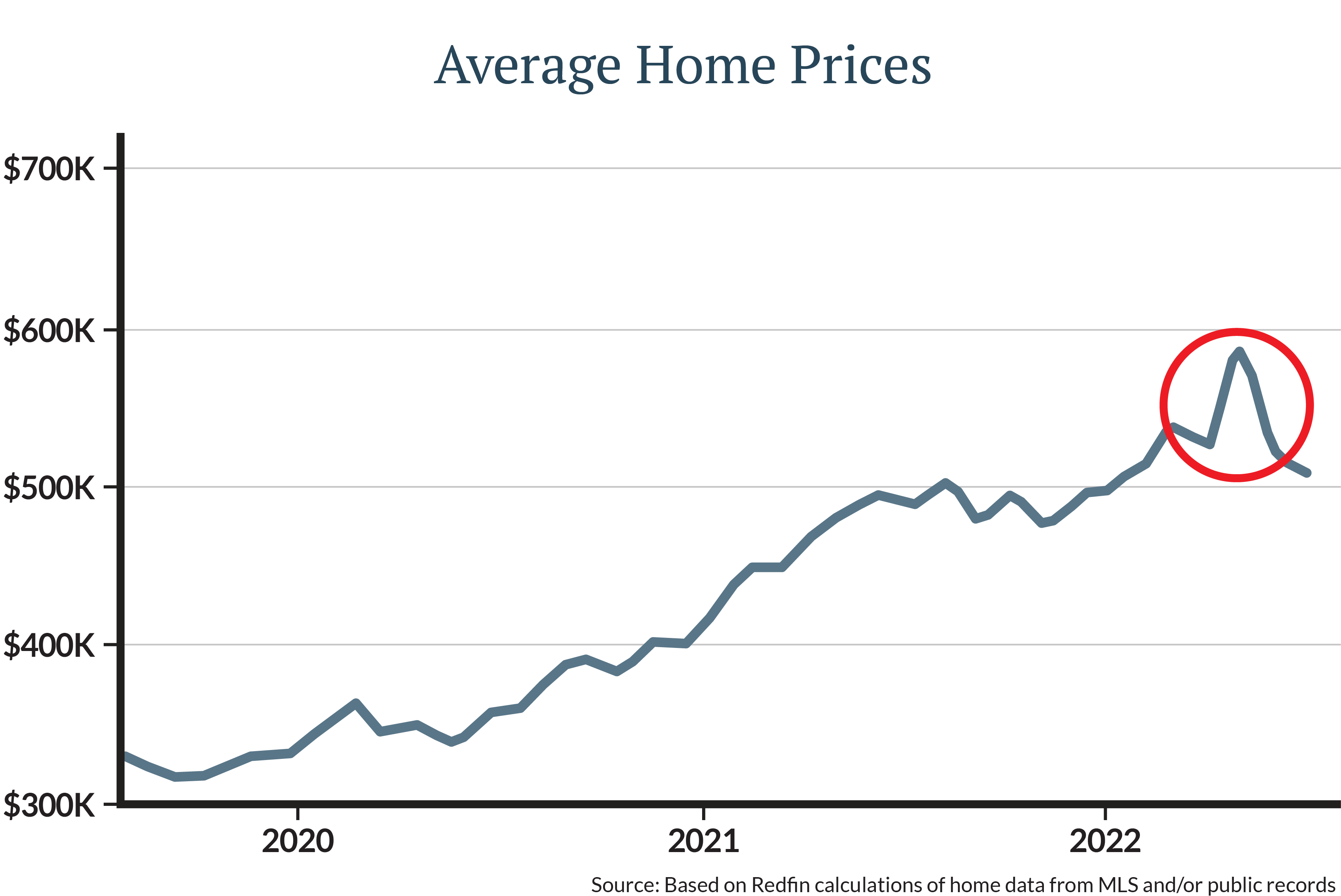 Labor market and price discovery factors Last week, we received new information about the labor market. Those worrying about inflation fear a tight labor market will continue to put upward pressure on wages. While that is true, we are seeing signs that the market is not getting tighter. Last Friday’s employment report showed that the rate of unemployment was 3.7% in August, the highest since February. Average hourly earnings grew by 0.3% for the month, less than expected and below previous months’ levels.

The point is that while we can’t argue that inflation is transitory any longer, we don’t believe its forces are permanent. Factors such as the supply chain and work-from-home effects will diminish while the tight labor market will ease with slower economic growth. We’re not likely to see the Federal Reserve hike interest rates to late-1970s and early 1980s levels.

Finally, the long-term secular trend of deflation due to price discovery hasn’t disappeared. It has simply been overrun near-term by the aforementioned post-pandemic effects.

For example, that blue turtleneck? I can find it on Amazon, eBay or Poshmark, buy it today, new or used, and have it delivered to my home in less than three days. This kind of price discovery wasn’t available in the 1970s and will continue to have a deflationary effect for some time.