The Masters golf tournament, as its name suggests, is played by the best talent golf has to offer. During the tournament last weekend, I couldn’t help but think about the change in leadership of golf’s greatest players. Among those were Gary Player, Jack Nicklaus and Tom Watson—players I grew up with—teeing off from the honorary tee box to open the tournament. And then there was Tiger Woods, struggling to get through four rounds to finish the tournament at 47th.

The winner, Scottie Scheffler, has been on tour since 2018 and never won a Major. He sure won this weekend, by a three-stroke margin. Cameron Smith, who tied for third after staying in contention until Sunday’s round, recently won The Players Championship at Sawgrass. These are not household names…yet. Given their top-10 rankings though, they likely represent the future leadership of the PGA tour.

Global markets are exhibiting a change in leadership as well. Thinking about how the leadership transition takes place and affects portfolio construction is important.

This chart reflects the U.S. trade deficit, month by month, in billions of dollars. You can see that the trend line is down, which means the deficit has been getting worse for most of the last 20+ years. The March deficit is likely to exceed $90 billion. This deficit means that we import more goods and services from other countries than we export. 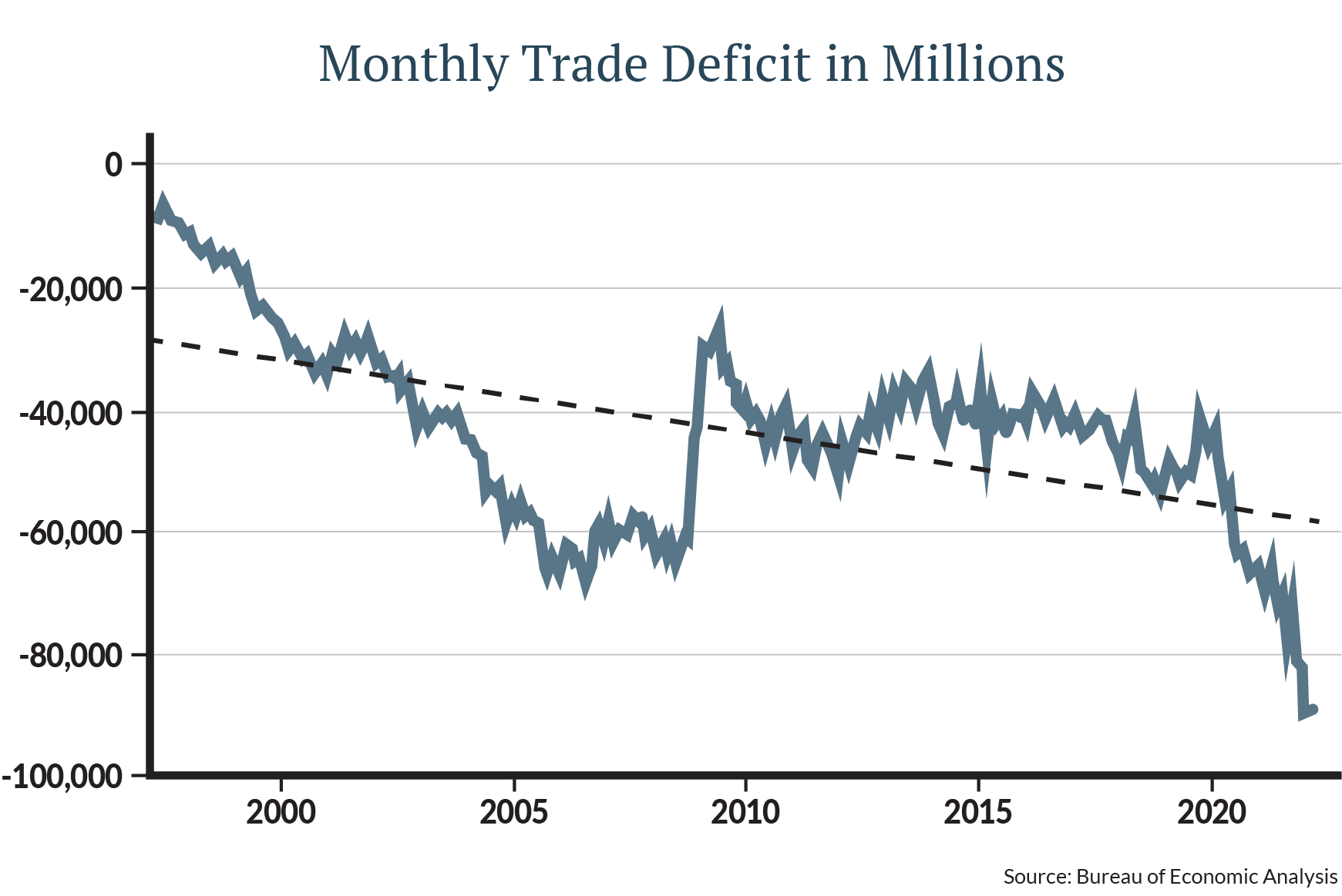 The tariffs and trade regulations during the last Administration may have begun a process of reducing global trade in favor of onshoring production. The supply chain issues caused by the global pandemic will accelerate companies’ desire to move production closer to home. Finally, the potential for a shift in the geopolitical calculus in Europe given the Russian/Ukraine war will affect corporate management teams’ views on where to source products and materials.

If globalization over the last 20 years had the impact of reducing inflation, then a reduction in globalization could have the opposite effect and cause the average rate of inflation to remain higher over time. Certainly not the level we see today, but nonetheless elevated from the last decade’s average.

Higher inflation means higher interest rates, and it seems likely that at this point the neutral rate for Fed Funds rate (a short-term interest rate targeted by the Federal Reserve) will also be elevated. This suggests that interest rates across all maturities will be higher.

This doesn’t mean we abandon bond investments, but it does mean we invest in fixed income securities that produce more cash flow (which can be invested as rates move higher) and hold our average maturities at current levels, closer to four years, rather than selling existing positions.

In the coming 10 years, companies that have relied on off-shoring production to reduce their costs and improve their margins will not fare as well. Technology companies in particular may need to manage a higher cost structure as they alter their supply chains. That doesn’t mean we abandon those investments. However, we need to be thoughtful regarding how much they should be overweight given their outsized exposure in benchmark indices such as the S&P 500 Stock Index.

This chart shows technology and communication services stocks (social media companies are included here) as a percent of the index, and you can see that they have reached the same peak representation as in 2000. 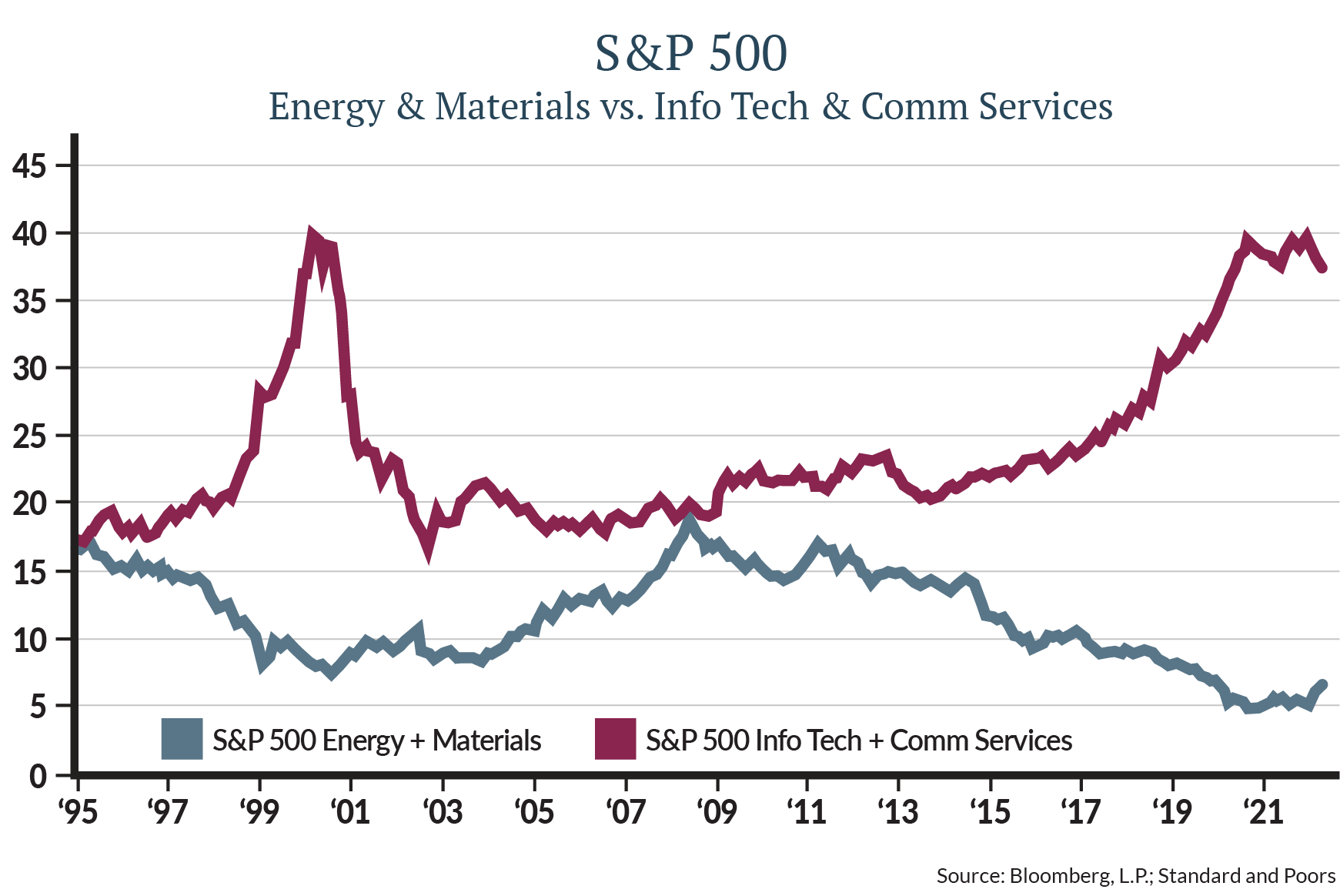 At the same time, companies in the energy and materials sectors have become less than 10% of the index after peaking near 20% before the 2008 financial crisis. Many of these companies may benefit from secular themes such as higher inflation and transitions to greener forms of energy electric transportation. As these themes unfold, it may make sense to add to energy and materials companies’ portfolio weights.

As leadership in markets changes given global-macro trends, portfolios can be altered to reflect these changes without abandoning current positions. Just like those twenty-somethings on the PGA tour who are taking over, they’ll likely be in leadership positions for some time.