Volatility has returned to the bond market. The year-to-date-rise in bond yields is remarkable more for its speed than in its magnitude. Yields remain low by historical standards, but sudden moves are unsettling and serve as a reminder that the Federal Reserve exerts the greatest amount of control over the short end of the yield curve. While we don’t view inflationary pressures as excessive, we will be watching the data closely and looking to capitalize on those periods when market volatility offers us compelling value.

Intermediate and long-term Treasury yields have risen precipitously to begin 2021, with the 10-year Treasury trading near the pre-pandemic level of 1.6%, up from 0.90% at the end of 2020 [Chart 1]. Higher yields have pushed down the prices of existing bonds, resulting in negative year-to-date total returns for most investment-grade bond indices.

Floating rate bonds, whose variable coupons mitigate interest-rate sensitivity, have outperformed, while longer-maturity bonds have suffered the largest price declines. Rising growth and inflation expectations are pushing longer-term yields higher even as the Federal Reserve keeps short-term rates pegged near zero and pledges to keep them there for some time. 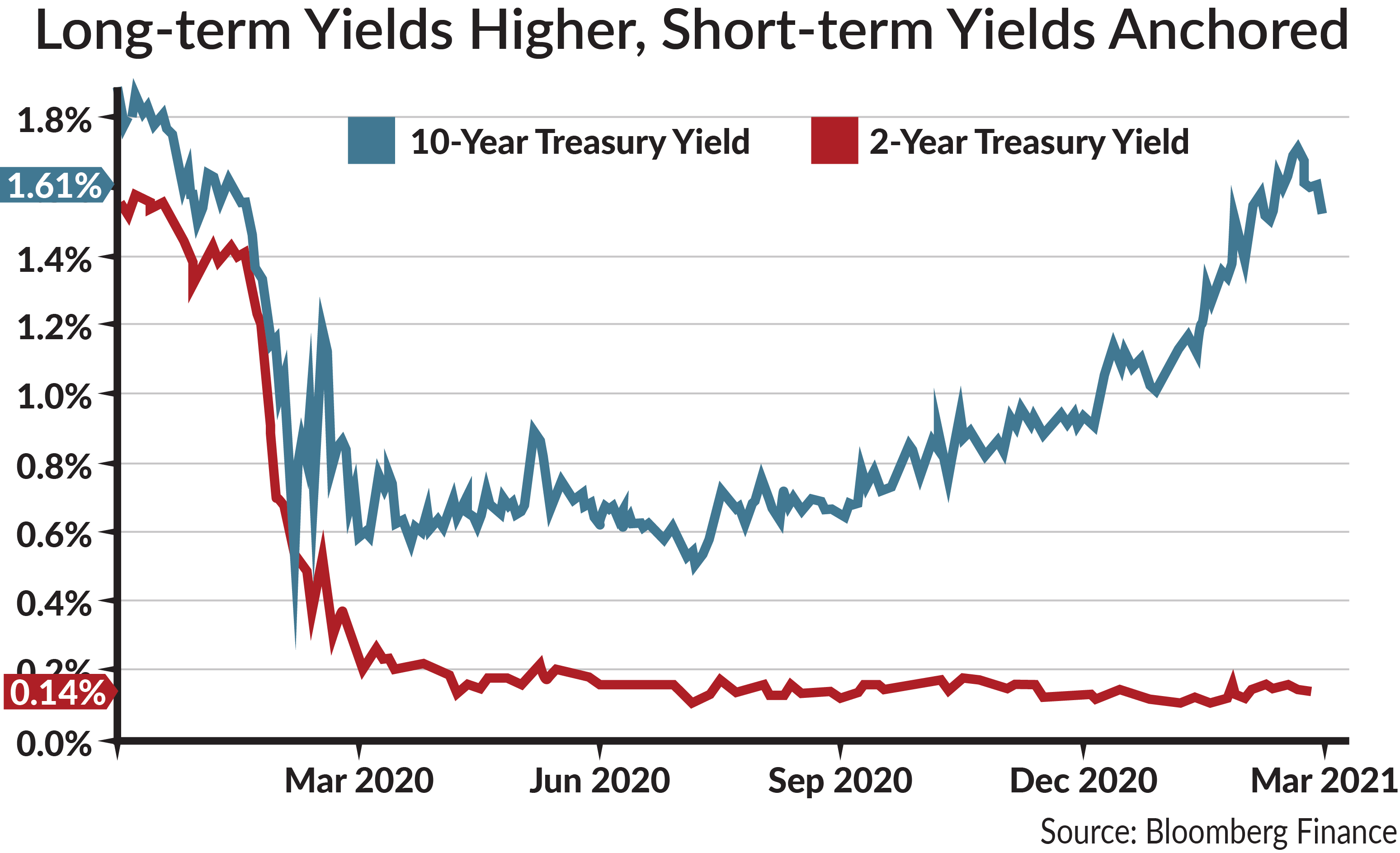 The Fed left short-term rates unchanged but upgraded its economic projections at its mid-March meeting [Chart 2]. It now projects real gross domestic product (GDP) to grow 6.5% this year, up from December’s projection of 4.2%. Fed officials are also projecting a spike in the personal consumption expenditures (PCE) inflation index—the Fed’s preferred measure of inflation—to 2.4% this year, up from 1.8% in their prior forecast. Fed Chairman Jerome Powell made it clear in his post-meeting comments that the Fed expects this year’s strong economic growth to have only a “transitory” effect on inflation. Indeed, the committee projects PCE Inflation to revert to its 2% target in 2022. 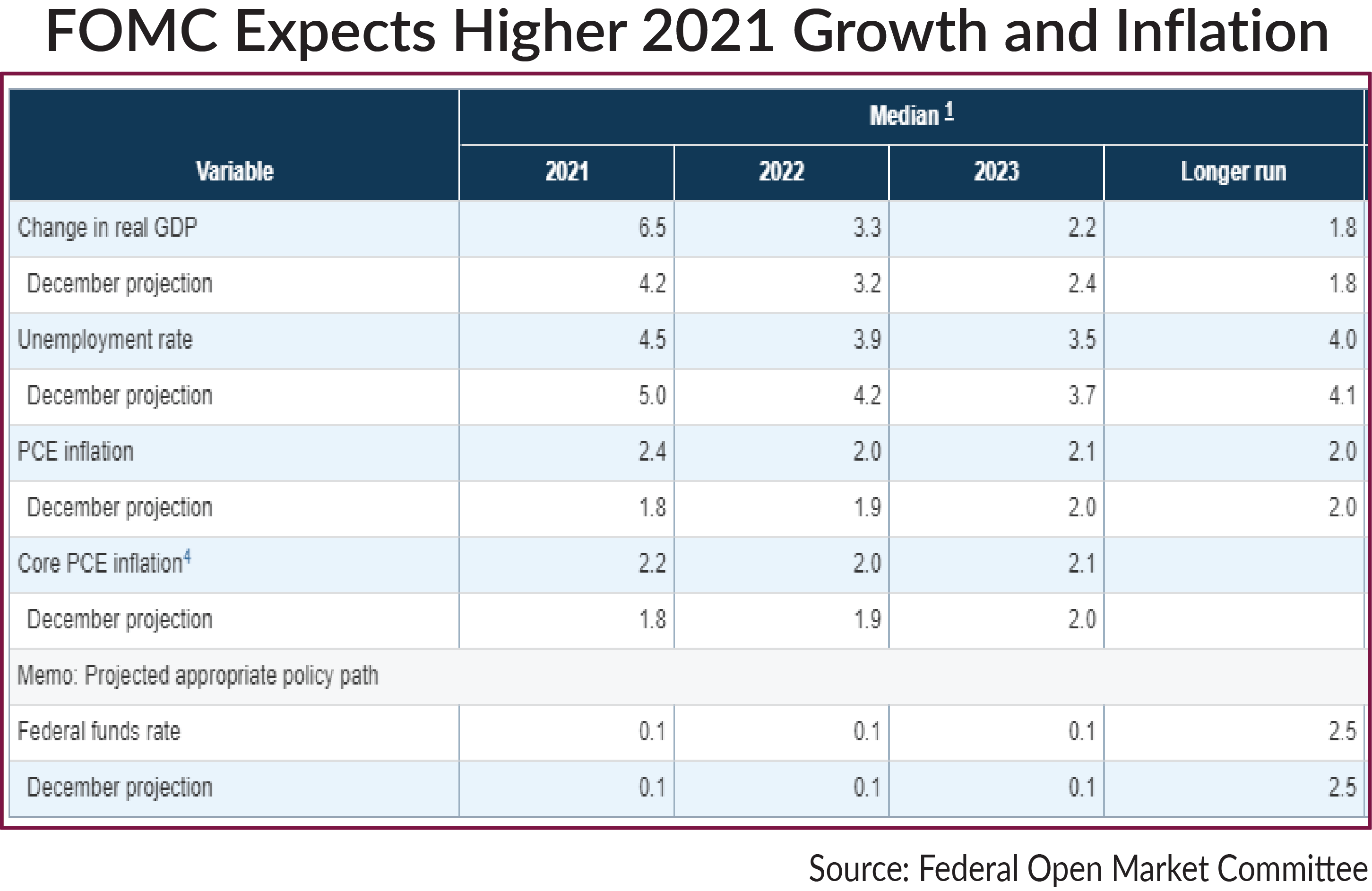 The Fed’s so-called “dot plots,” which show the interest rate projections of all 18 FOMC officials, continue to project the Fed Funds rate at zero through the end of 2023, although four officials now expect a rate hike as early as next year, suggesting that not all Fed officials are as sanguine about inflationary pressures as the chairman.

Powell reiterated his position that it is premature for the Fed to consider tapering its monthly asset purchases ($80 billion of Treasuries and $40 billion of mortgage-backed securities) until “substantial further progress” is made toward achieving its inflation and employment mandates.

Yields held steady in the immediate aftermath of the meeting as traders focused on the likelihood of “lower for longer” interest rates, but the following morning yields spiked as traders digested the Fed’s more optimistic growth estimates. The bond market’s immediate and subsequent reaction to the Fed’s March meeting illustrates the tension between investors who view continued dovish policy and government stimulus as necessary for economic recovery and those who fear that today’s transitory inflationary pressures could become systemic if left unchecked.

Our view is that stronger growth will indeed lead to higher inflation this year, driven by comparisons to last year and rebounding spending, but that it is likely to be a temporary rather than sustained phenomenon. Above-trend inflation should be expected as the economy fully opens, but dramatically higher inflation is not likely. The number of unemployed is still four million higher than pre-Covid, with roughly five million having left the labor force. This should keep short-term wage pressures in check, while secular disinflationary trends including lower birth rates and technological advances remain intact.

Still, in an improving economy, negative real (inflation adjusted) yields make less sense, and we think the yield curve may continue to steepen. For this reason, we prefer short-to-intermediate-term bonds, which are less sensitive to interest rates but yield more than cash.

We believe that fiscal stimulus, vaccinations, and economic reopening are positive for corporate credit, which we prefer to government bonds. Emerging market bonds continue to offer attractive yields in comparison to developed market bonds. We remain tactical investors and would likely view a sell-off in the credit markets as a buying opportunity.