How To Lie With Statistics

When I was in college, it was necessary to take statistics, which I loved, found fascinating and have always been grateful for. Our professor had us read a book by Darrel Huff titled, “How To Lie With Statistics.” Amazingly, still available, if you’re interested. The purpose of this read was to inform us that you can tell any story you want with statistics. So, to understand the story well, you need to delve deeper than the numbers presented.

This book resonates with me so much this year as we are confronted with data on the pandemic, polls forecasting the election and volatile stock market performance. Most of us are not statisticians, so trying to understand the real story can sometimes feel very complex. The main point of Mr. Huff’s book is that in order to discern facts, we need to question the data presented, understand the perspective of the presenter, and find corroboration for the conclusions.

As the COVID-19 pandemic has continued, we’ve seen an evolution of how data is presented. We started with the two most dramatic statistics, the number of people infected and the number of deaths caused by the virus. These numbers have been compared across countries around the globe. Often without the benefit of understanding the size of those countries’ populations and their age demographics—key pieces of information to understand the rate of infection and morbidity comparisons.

Over time, we started to see the “positivity” rate reported, as people understood that just looking at the number infected doesn’t make sense without the number of tests being administered. We’ve also learned that the way data is presented and where it comes from impacts the way people perceive its quality. Many turn to the Johns Hopkins Coronavirus Resource Center, as they’ve done a good job of discussing how the data is collected and using infographics to present in ways that make it easier to understand.

Finally, as we’ve learned more about the virus and epidemiologists have learned more about how to treat and potentially prevent infection, we’ve begun to focus much more on the companies that are developing vaccines. We are trying to learn how quickly vaccines will become available in a quantity large enough to treat a majority of the population.

Even stock prices have loosely followed the probability of a vaccine becoming available. Exhibit 1 looks at the likelihood that we’ll have enough doses for 25 million people in a calendar quarter between now and 2022. As you can see the probability for Q1 2021 has risen dramatically as more trials get under way across multiple pharmaceutical companies. However, that same probability has declined from a September peak of about 70% to about 50% now.

We interpret this data to mean that the economic impact of the pandemic will be longer-lived than thought a couple of months ago and the economic recovery, while strong in Q3 this year, will become more uneven going forward. Most importantly, though, the data provides some evidence-based measures for determining how quickly the impact of the pandemic may be overcome. 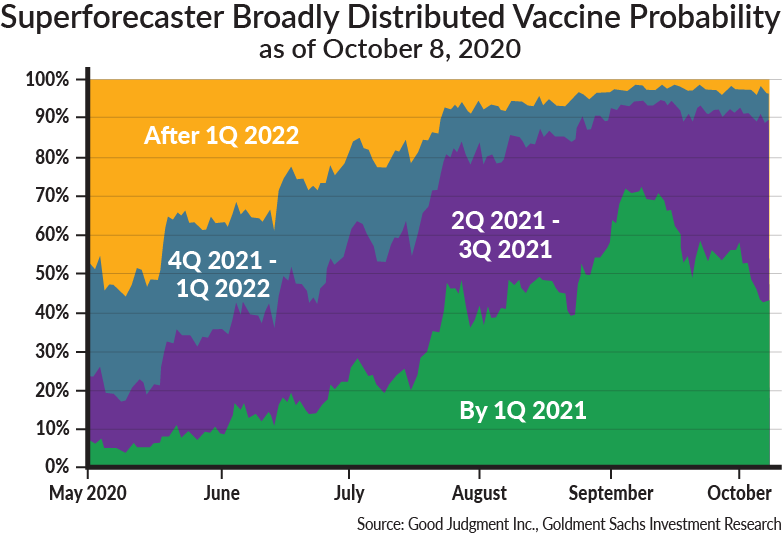 In addition to presenting the impact of COVID on global health, we’ve seen more interest in the economic data we’ve always followed to determine the health of the U.S. and global economy. In particular, employment numbers. The pandemic has been devastating for many who find themselves unemployed or under-employed. Each Thursday the jobless claims data provides some evidence of the jobs recovery pace and the health of different sectors of the economy. Each month, on the first Friday, we get an unemployment report with more detail.

Tomorrow’s weekly update for initial jobless claims will likely show that new claims remain near 800,000 for the week. Ongoing claims peaked at 25 million and now stand just below 13 million. So while we’ve seen much improvement from the peak in May, we have a ways to go. This data cannot be disputed. There are millions more unemployed today than there were before the pandemic. The fact that there are economic sectors booming and suffering at the same time makes discernment between the two relevant for investors.

There has been much debate about the need for additional “stimulus” from the Federal government. Because the last program replaced income and business spending, it was not really stimulus but filling a hole in the economy due to the pandemic. The House passed a $2.5 trillion bill several weeks ago. Since then Secretary of Treasury Steve Mnuchin has been negotiating with House Speaker Pelosi and arrived at a $1.8 trillion measure. The difference is substantial and the order in which individuals and businesses receive assistance needs reconciliation. We believe it seems likely that a package will pass, although whether that’s before or after the election remains to be seen.

Markets have priced in a measure of at least $1.5 trillion so anything substantially more or less will impact prices.

The U.S. elections are November 3, so we are less than four weeks away. As money has poured into the election cycle in ever-larger quantities, statisticians have found a permanent home for work and pollsters have dramatically increased their visibility.

Polling information is ripe for telling a misleading story. The art of polling is taking a relatively small sample size of thousands and projecting what millions are likely to do. As politics have become a mainstream part of our 24/7 news cycle, we have to understand that pundits can use data to tell the story they want, energize their base and attempt to get a better turnout.

The fact that we have to cajole people to vote is a shame, though we know that the difference between a 60% turnout and 65% turnout favors one candidate over another in both national and local elections. While polling shows a clear leader, the high volume of absentee ballot voting relative to other elections makes the outcome more difficult to predict. 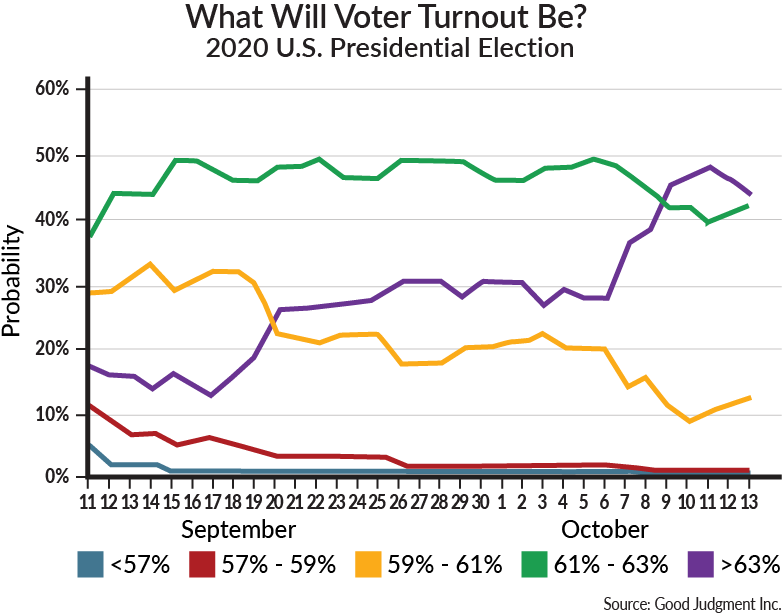 We have prepared different outcome scenarios and will use those to manage portfolios depending upon the outcome, volatility and opportunities presented.

Pre-election markets trade based on uncertainty. The more uncertain the outcome of the election, the greater the volatility in asset prices.

In our recent presentation on markets and elections, Jason Herried, SVP Director of Equity Strategy, noted that over longer periods of time, the party responsible for policy matters less for asset prices. However, in the very near term, investors and the electorate obsess about policy differences. The stimulus mentioned earlier is an important factor in the economy’s recovery and investors’ appetite for risk. As a result, the market must decide between near-term stimulus benefit or long-term tax hikes when pricing in a Democratic sweep of the White House and Senate.

Every week, we comb through data, invest in outside research around that data and use over a hundred professional money management firms that do the same. This effort allows us to see through those efforts to bend a story with statistics and construct an investment strategy that will work for clients’ objectives.