Hang On to Your (Ultra)Shorts

Early last week I was preparing a few PowerPoint slides for an internal team meeting about short-term bond portfolios. The meeting was on the same day that the Labor Department released the consumer-price index for August. The report came in above expectations with headline CPI reported at 8.3% (down from 8.5% in July) and Core CPI at 6.3% (up from 5.9% in July).

The hotter-than-expected inflation numbers jolted markets hoping for a more benign report. The bond market immediately priced in an additional Federal Reserve rate hike and short-term interest rates increased, making the numbers on my presentation obsolete. Such is the nature of fast-moving markets these days, when one data point can induce a bout of volatility and reset expectations about the future. Stocks declined 4-5% on the same news as equity investors digested higher interest rates’ impact on economic growth and the possibility of downward revisions to corporate earnings.

The chart below plots investor expectations of the expected path of the Fed Funds rate over the next year based on futures markets. After the inflation report, investors solidified expectations that the Fed would raise rates at least 0.75% at its September 21 meeting, resulting in an effective Fed Funds rate of 3.13%. More importantly, investors began to bet that the Fed Funds rate would not peak until the first half of 2023, at nearly 4.5%. Any pivot to an easing of monetary policy was pushed back into the second half of next year when the market believes the Fed will begin cutting interest rates once again. 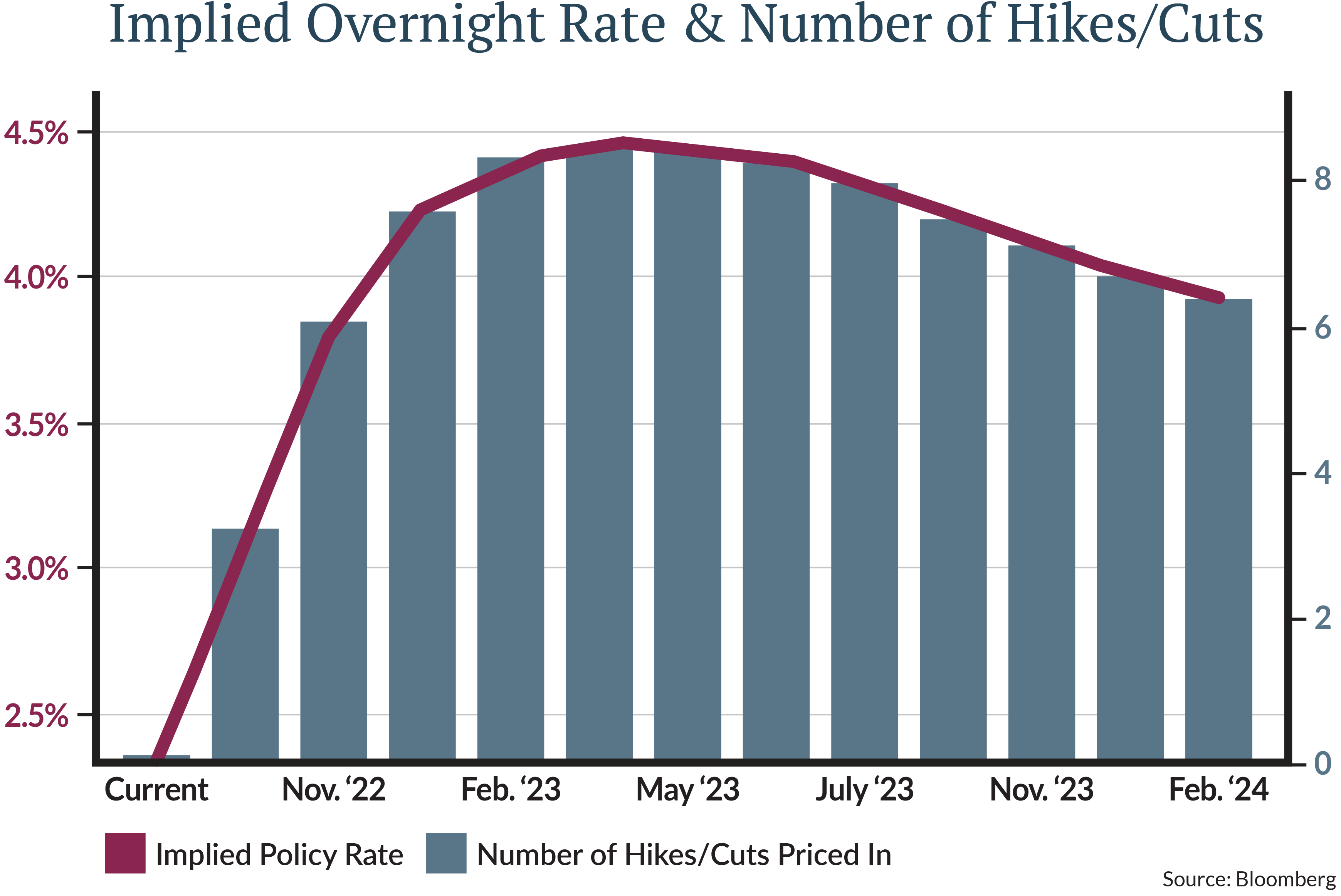 A silver lining for investors in this period of rising interest rates is that a higher Fed Funds rate means higher yields on short-term bonds, including near-cash options such as ultrashort bond funds. Ultrashort bond mutual funds, which own bonds with maturities typically averaging less than one year, became popular over the last decade as the Fed held short-term rates close to zero. Ultrashort funds position their portfolios with more interest rate sensitivity than money markets but less rate sensitivity than most other bond mutual funds. Their short-term holdings typically yield 0.50%-1.00% more than money markets, which helped them outperform cash as rates were stable.

This year, amid a breakneck pace of rising rates, mutual fund research firm Morningstar reports that the total return of the ultrashort bond category is down about 1%. That is worse than cash but far better than intermediate-term bond funds, which are down over 8%. Ultrashort bond funds’ yields are now approaching 3-4%, more than 2% higher versus the beginning of the year. Their current income distributions provide a nice cushion to help them withstand further rate increases. We expect ultrashort bond funds to outperform cash over the remainder of the year and provide an attractive alternative to bank savings accounts.

Investors have different goals, and it is important to match your strategy to your long-term objectives. For many investors, they are pursing maximum total return over a lifetime. This means accepting short-term volatility as part of the price of long-term growth. We expect the high degree of uncertainty in today’s markets to persist until the outlook for inflation and interest rates stabilizes. Long-term investors should stick with their financial plan, rebalance between stocks, bonds, and compliments consistently, and take advantage when markets overreact to short-term events.