Have We Seen the Top in Bond Yields?

Equities have rallied following a June swoon, and investors are wondering if we’ve seen the bottom in the stock market. Bond investors are asking the opposite question: Did June mark the top in bond yields for this cycle? With economic data deteriorating, it looks increasingly possible that intermediate-term bond yields have peaked, setting up a better second half for fixed-income investors seeking to deploy capital.

I’ve been fielding a higher-than-usual amount of inquiries about short-term Treasuries in recent weeks. With interest rates rising, clients with excess savings are looking to earn a higher yield on their money. The national average interest rate for savings accounts is under 0.15% according to Bankrate.com, while the one-year Treasury Note yields about 3%. Moving from cash into short-term bonds seems to make a lot of sense.

But before making this short-term trade, investors should consider their investment horizon and where we are in the economic cycle.

The Fed Funds rate stands at about 1.58% as I type this, and the Fed is expected to raise rates 0.75 percentage points this week to a range of 2.25%-2.50%. The three-month T-Bill is closely correlated to the Fed Funds rate and has largely priced in this move. Meanwhile, the 10-year Treasury yield has been declining since June 14, when it peaked at 3.47%. The two are on a collision course that tends to presage slowing economic activity as shown in the chart below. 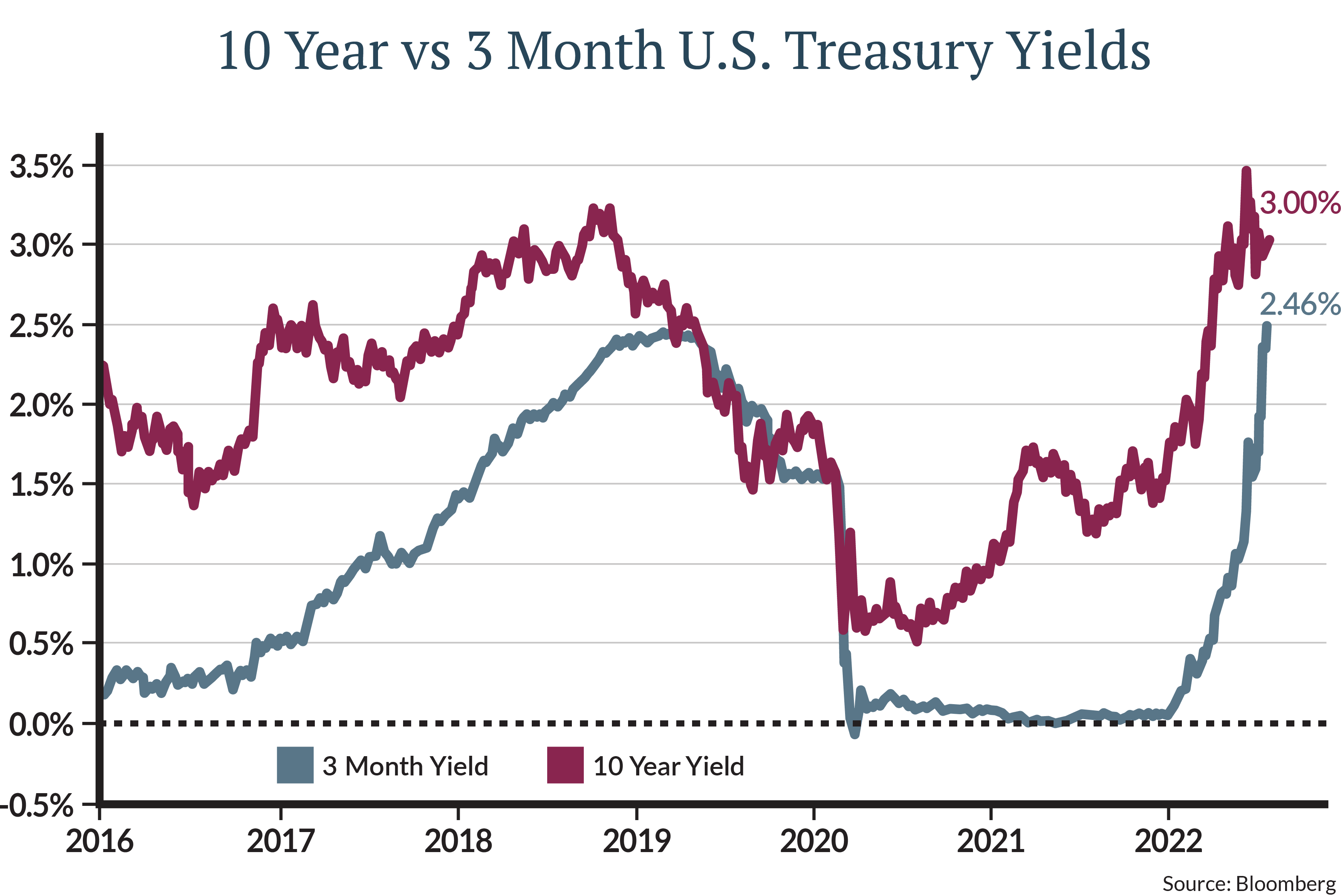 The bond market is telling us that the Fed’s rate-hiking campaign will be successful in bringing down inflation—but at the expense of economic growth. Indeed, long-term inflation expectations implied by the TIPS market have fallen to about 2.3%, not far from the Fed’s 2% target, in the wake of an unexpected decline in Q1 GDP.

Other data also point to a slowing economy. Recent purchasing manager index (PMI) data indicate that both manufacturing and services sectors are slowing as rising costs for essentials like gas, food, and rent force consumers to cut back on discretionary spending. The four-week average of initial jobless claims is up 60,000 since mid-March, and even the red-hot housing market has stalled in the face of higher mortgage rates.

The Fed is likely to continue hiking short-term interest rates until data begin to show inflation cooling significantly. But if growth and inflation have peaked for this cycle, intermediate-term bond yields may also have peaked, setting up a better second half for fixed-income investors.

Futures markets currently expect slowing growth to result in a Fed pivot to easing (rate cuts) in the first half of 2023. If markets are right, bonds maturing in 2023 may need to be reinvested at lower yields. In contrast, investors who extend maturities now may be able to achieve total returns above current yields.

The chart below shows hypothetical one-year returns for an investor in a 10-year Treasury bond at different starting yields. Today’s higher yields may provide a cushion of income to offset rising interest rates. Should rates decline, an investor who buys the 10-year at 3% today could see significant price appreciation. 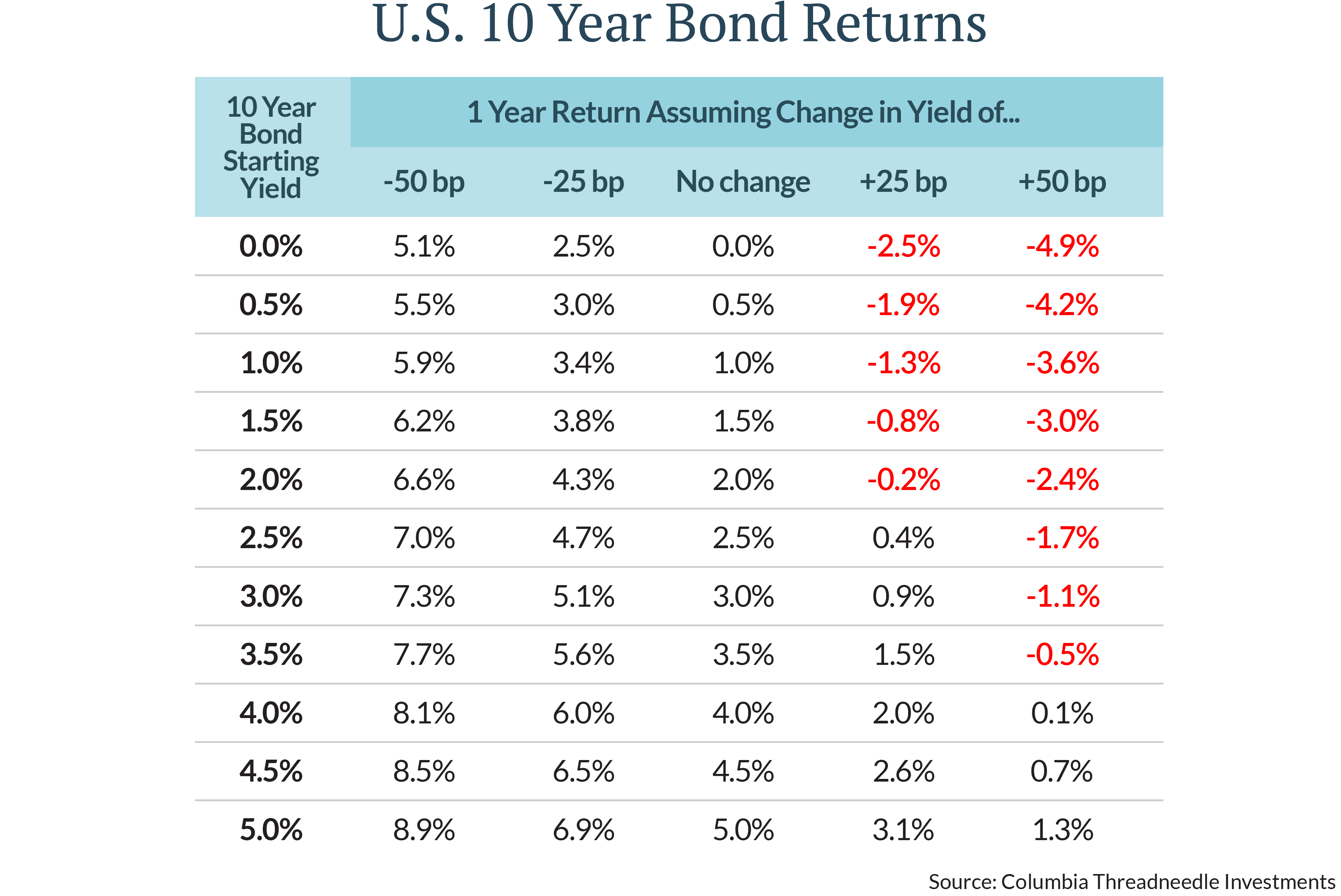 The last rate-hiking cycle ended after the three-month vs. 10-year yield curve inverted in 2019. Yields subsequently fell across the maturity spectrum as the Fed pivoted to cutting rates. While we can’t predict when the Fed will stop raising rates, we believe a similar story could play out over the next six-to-twelve months as the Fed’s war on inflation weighs on economic growth.

With yields near multi-year highs and recession risks rising, we believe investors who do not need to access their principal for several years should consider modestly extending the average maturity of their bond holdings with a focus on high-quality fixed income. As is often the case in investing, what feels wrong today may prove rewarding tomorrow.