If you were among the 100 million people who watched the Super Bowl on Feb. 2, you may have seen the commercial in which Bill Murray reprised his role from the 1993 movie Groundhog Day. Murray played Phil Connors, a weatherman caught in a time loop and forced to relive the same day over and over again until he gets it right. Murray’s physical comedy and deadpan delivery of comic one-liners in the face of existential torment made the movie a classic.

The commercial didn’t quite live up to the original in my opinion, but oddly enough it resonated with me as an investor; or more precisely, as a fixed income investor. That’s because for the past decade bond investors have lived in a sort of purgatory of low yields where generating a safe and steady stream of income has been a challenge. Just as Phil loses his patience with the obnoxious salesman Ned Ryerson (“BING!”) in the film, retirees living on a fixed income can be forgiven for losing patience with Federal Reserve policy that has rewarded risk-takers at the expense of savers.

We noted the continuation of this phenomenon in our recently published investment outlook. Following the stock market’s shaky finish to 2018, the Fed cut short-term interest rates three times in 2019 and resumed the growth of its balance sheet through the purchase of Treasury bills. These actions buoyed stocks and produced outsize returns in the corporate bond market while slashing interest rates on savings accounts. As we noted in the outlook, higher prices and lower starting yields make an encore performance for fixed income in 2020 unlikely.

But it isn’t just the Fed dictating low interest rates. Foreign investors have flooded into U.S. bonds for one simple reason: the United States still has the highest yields in the developed world. Much lower and even negative yields in Japan and Europe (the German 10-Year bond yields -0.40%!) have translated into massive foreign demand for U.S. securities, pushing down long-term Treasury yields and pushing up the price of corporate bonds, whose valuations today are at the expensive end of their historical range after more than $100 billion of foreign inflows in 2019.

Although we don’t expect a recession, and in fact believe that economic growth may improve as the year progresses, the richer valuations resulting from this global dash for yield are such that investors are receiving less compensation for risk in the bond market. This is why we have been upgrading the quality of our corporate bond sleeve and adding opportunistically to high quality mortgage-backed securities (MBS). 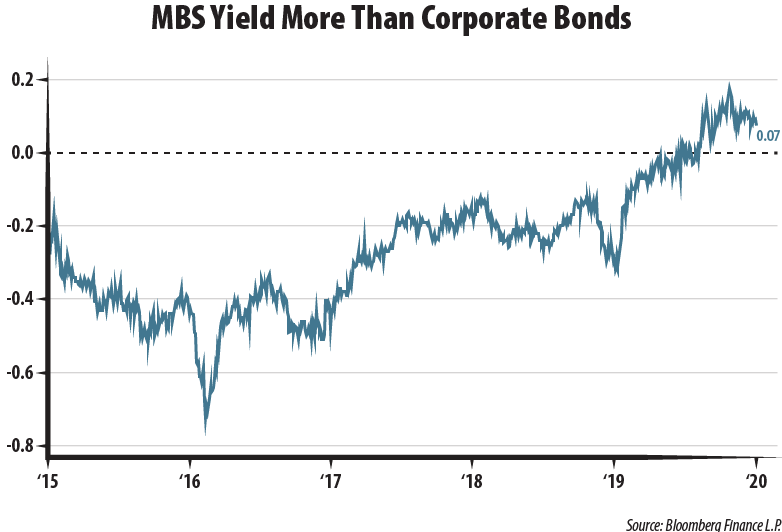 The relative value in MBS is partly the product of mortgage rates that are at their lowest levels since 2016. This has led to a surge in refinancing activity, which is a negative for investors in MBS that trade at premium dollar prices. The chart below demonstrates the relationship between refinancing activity as measured by the Mortgage Bankers Association Refinance Index and MBS spreads. As a result of increased prepayment risk, investors in MBS demand greater excess yield, or spread, above Treasuries. 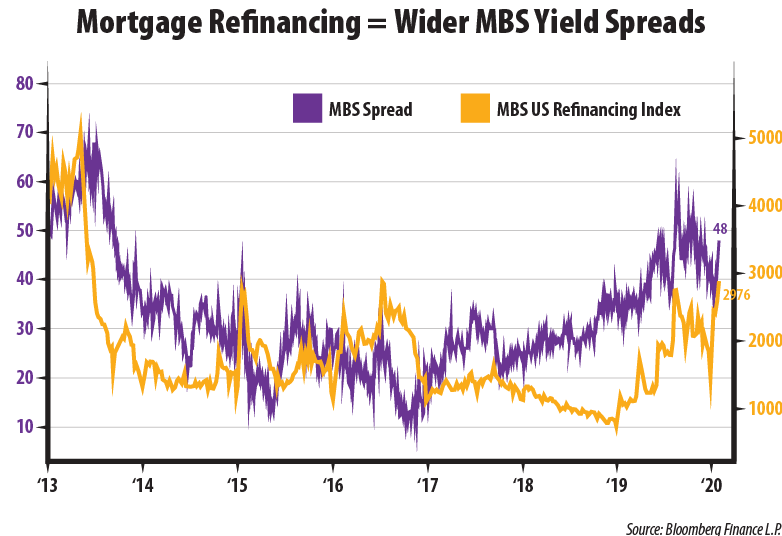 In addition to attractive valuations, agency MBS historically have a lower correlation to stocks than corporate bonds. This should provide welcome diversification for balanced portfolios if volatility returns to the stock market as a result of the coronavirus outbreak or other unpredictable shocks.

In Groundhog Day, Phil was forced to change the way he approached life in order to escape the repetitive loop and find love. As investors, we can’t will our way to a world of safe and steady income, but we can adapt to the world as we find it and take advantage of relative value opportunities when they arise. Until we wake up in a world where central bankers have abandoned ultra-low interest rates in favor of structural economic reforms, we believe this is how investors will need to approach income investing.

P.S. Punxsutawney Phil, the groundhog from Groundhog Day, didn’t see his shadow this year, so we can all look forward to an early spring!