For the U.S., How Much Debt Is Too Much?

In several notes and questions from clients, we have heard concerns over the growing national debt, accelerating as a result of the federal government’s response to the pandemic. Many point out that current debt, as a percent of gross domestic product (GDP), is now at a level unseen since the post-World War II era (see chart below). 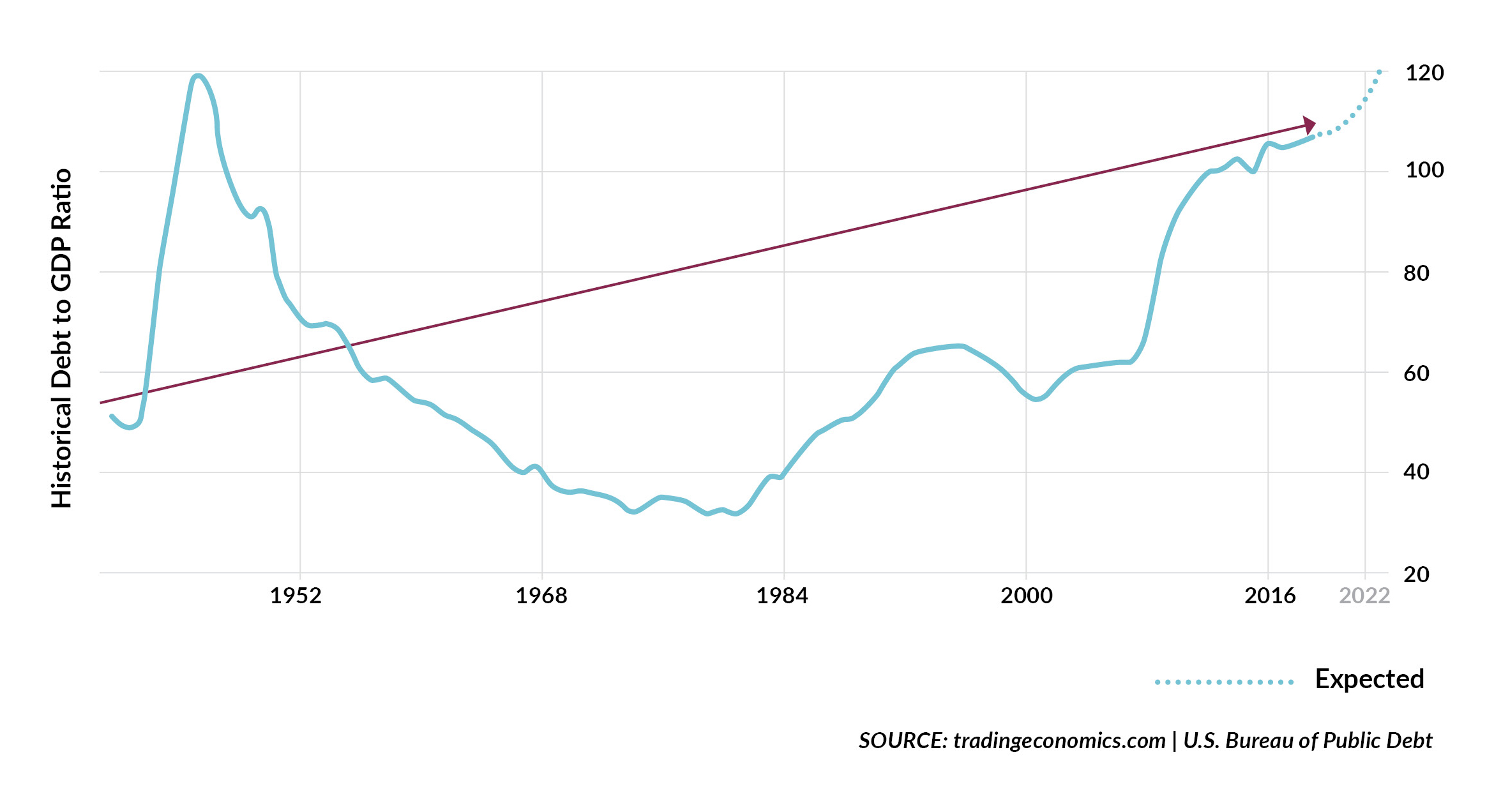 Many wonder if this level of debt is sustainable, what its impact on interest rates will be and if we’ll ever see a slowdown in its growth. Still others have commented that this looks a lot like Japan’s economy in the early 1990s, and Japan’s annual growth rate has averaged less than two percent for decades. Finally, some want to know if we’ll ever return to the robust economy we were used to in the ‘90s.

Last year, the federal deficit was near $1 trillion for the first time. Due to recent programs like the CARES Act, which are meant to assist those who’ve lost jobs due to the pandemic, this year’s deficit will be near $4 trillion and next year estimated to be another $2.1 trillion. Those figures could go even higher as additional laws are passed.

The U.S. economy was projected to total nearly $21 trillion in 2020 before the pandemic hit. To put this in perspective, the last time we saw debt-to-GDP at this level, 1945, the economy was only $228 billion! Additionally, it is possible that we’ll see a decline of roughly $2 trillion in the size of our economy due to the pandemic.

The stimulus packages passed since March are meant to plug the income and revenue gap for individuals and corporations due to the pandemic. Late last week, we saw that personal income was actually up 11% in April, due to CARES Act payments. However, much of that money wasn’t spent on consumer items, as we saw consumption decline by 13%. As businesses and the economy continue to reopen, we’ll watch the pace of activity to see how quickly the economy recovers.

Federal spending will reach $7.7 trillion versus last year’s $4.45 trillion. Seventy-five percent of federal spending is made up by health care (22%), pensions (19%), education (17%), defense (11%) and welfare (6%). The government’s total deficit by the end of this fiscal year will likely be greater than the size of the economy.

As shown in the chart above, the debt-to-GDP ratio shrank to less than 40% by the early 1980s. A higher economic growth rate, due to the baby boom and technology inspired innovation, led to higher tax receipts and a reduction in the deficit.

We’ve often referred to the millennial generation as a force as big as boomers. The reason is in the numbers. There are over 70 million of them, just as there were over 70 million boomers. They are still under 30 years old, on average, and we expect they will form families and produce consumption on the same order as their predecessors. It will most certainly be different industries that benefit, but that’s a different discussion.

The fact that millennials have come of age during the financial crisis of 2008-09 and now are living through the pandemic driven recession suggests that they might be better savers than their boomer counterparts. After all, millennials’ great-grandparents, who grew up during the depression, became savers by virtue of their experiences. Savers by nature are investors, and that leads to demand for both equity and debt investments as their income and wealth grow.

Of course, this is a long-term trend that will take another two decades to play out. However, it is dramatically different than Japan.

Japan has been stuck with little economic growth or inflation for the last thirty years. As a result, the country has built up a massive amount of debt, putting its debt-to-GDP ratio at more than 200%. This number has grown substantially as Japan has responded to the pandemic in much the same fashion as the U.S.—only bigger. While our stimulus has amounted to just over 44% of GDP, Japan’s has equaled over 60%.

Certainly, the government’s debt restricts growth; however, Japan’s biggest problem is its aging population, nationalistic tendencies and low birth rate. There simply is no “next generation” as there is in the U.S. This creates two problems. The aging workforce means that over time the size of the workforce shrinks. Economies need productivity and workforce growth to grow at all. In addition, the consumer base shrinks, making Japan more reliant on trade with the rest of Asia to create economic growth. As a result, competition from China, Indonesia, Vietnam and other Asian countries inhibits Japan’s ability to grow. The U.S. has neither a shrinking workforce nor a dependence upon others for growth.

Finally, in order for the U.S. deficit to shrink, we need the increase in tax revenues brought on by future millennial-driven growth, combined with a shift in fiscal policy. And here is the rub. To date, neither political party can claim that it’s been fiscally conservative. The deficit has grown under both Republican and Democratic-led administrations and Congresses. It may require a change in leadership and approach to policy.

Here again, the future is certainly going to change. Our leaders in the White House and Congress are in their mid-70s. They will almost certainly be replaced by non-baby boomers beginning in 2024. Because the younger generations have lived through the financial crisis and now the pandemic recession, they may be interested in returning their political party or parties to an era of fiscal conservatism, which would allow these voters to take advantage of the growing tax revenues that occur when the economic growth rate moves back to the levels seen in the 1950s or 1990s.

The current level of federal debt creates uncertainty for investors. However, there are forces in play that have the ability to create greater economic growth which will most certainly produce higher tax revenues for the federal government. We may also see policy changes as we move forward that return the government’s expenses to a more reasonable level.