Double Tops in Mountain Biking and the Market

Before the development of carbon fiber, shocked forks and fat tires, I was a mountain biker, at least the version of that you can be in the Midwest. As my son has grown, and we’ve looked for new activities during the pandemic, I am happy to pick up my old hobby. The equipment is much better; my body is not. Still, it has been a great way to enjoy time with him and our summer.

Some trails consist of loops. Climbing to the peak point of a trail is a trial, but getting there the second time on the same ride seems almost twice as hard! Last week, the S&P 500 Index revisited and slightly exceeded the all-time high reached in February. Market technicians call that a “double-top.” An often referred to market chart pattern that can be an ominous precursor to future returns, or not.

Here is a price chart of the S&P 500 stock index over the last five years. You’ll notice the double top referenced by the blue arrows. 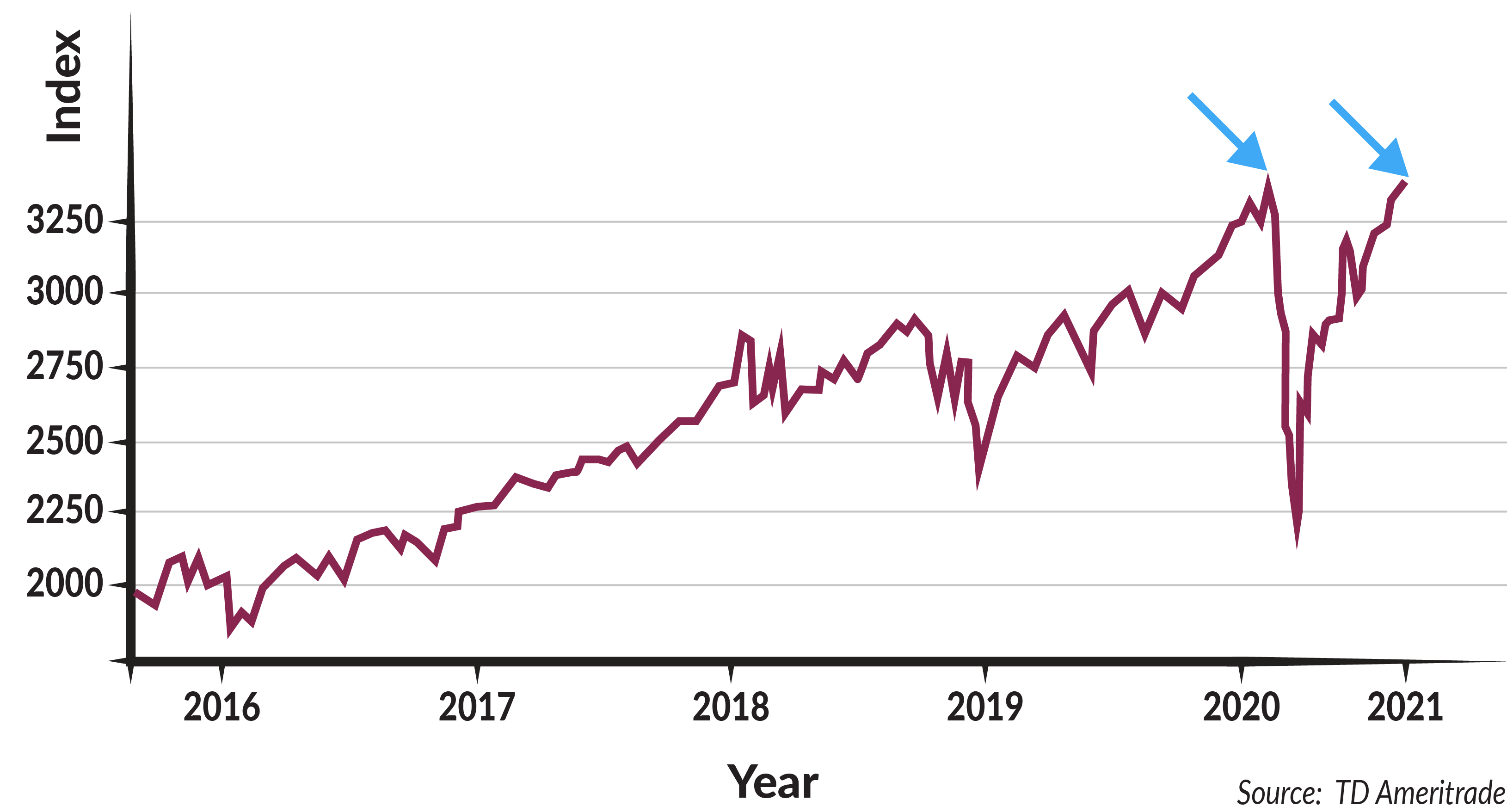 Stock technicians worry about the double top for a couple of reasons. First, those investors who were buying the S&P 500 Index the first time it reached these levels and hung on through the downturn, still own their positions and are excited to be able to exit their positions without taking a loss. That may produce selling pressure because the index is back at its February level. Those investors who were buying the market when it was near its nadir in March, can’t believe they’ve seen a 50% return and may now want to take profits. This also produces selling pressure and these two events combined can overwhelm the market’s ability to continue to move higher.

This pattern doesn’t just happen with indexes like the S&P 500. You can find it with many investments that trade at a price. Investors generally become more wary when they see this because the resolution can often be a fall on the other side of the second top. (This summer, I’ve become very familiar with falls!)

That is not always the case, however. In the past, when the S&P 500 Index has experienced this pattern, about two thirds of the time it resolves itself with a meaningful decline, often greater than 10%. That other third of the time the market “consolidates,” meaning that prices move back and forth near this second top, before pushing higher (the toughest leg of the bike journey).

That push can come from momentum (the idea that when prices are moving higher, they tend to want to continue higher) and/or a strong belief that the fundamentals (i.e. companies’ earnings and revenue growth) will confirm investors’ optimism. It is the latter that provides a better foundation for the next leg of a bull market.

Momentum has ruled the market for quite some time. Since the financial crisis in 2008-2009, the momentum factor has outperformed the S&P 500 Index by almost 200%. This is not always the case.

This may be because we have been in a meaningful technology transformation for some time. Trends like the internet of things, cloud-based data and smarter devices have led to the outsized performance of a number of tech companies like Microsoft, Amazon, Google and Apple. And, most importantly, these trends have not come to an end.

However, the fundamentals may belie the momentum. Here is a chart of Apple’s trailing twelve-month revenue growth since 2008. You can see that the trend line has flattened since 2015. To be sure, trailing twelve months revenue of $274 billion (as of June 30, 2020), up 5.7% is great. It may not be great enough to warrant the price earnings multiple investors are now paying. Apple became the first company to have a market capitalization of over $2 trillion just this week.

This chart shows the price/earnings ratio for Apple over the same time period. You can see that it now trades at a valuation not seen since 2007.

Apple’s price increase since the March low has resulted in it having the largest weight in the index, now accounting for 6.75% of the total index.

What to Watch for on the Trail

We will be able to monitor the market’s action from here and see if it consolidates at this level (kind of like me telling my son I need another water break) before moving higher or loses momentum as investors focus more on the fundamentals and extreme valuations of this year’s best performing stocks, like Apple.

Most importantly, keep in mind that trying to time the push higher or the failure will be difficult. Rather than favor a market timer’s approach, we prefer to look to the number of investment strategies we own in portfolios, knowing that their complementary styles will help us achieve clients’ objectives over time. I don’t rely on one gear when making a trek, so I wouldn’t rely on one strategy to achieve our clients’ objectives.