Last week, Giannis Antetokounmpo signed a $256 million five-year deal with the Milwaukee Bucks. The largest deal in NBA history and a big payday for the two-time NBA MVP. Of course Bucks fans are happy, the ownership is happy and Giannis appears to be happy. The question one must ask—the one that’s always asked when a new all-time high is reached— is “is this too much?”

We’ll leave the answer to the question as it relates to NBA players to the pundits on ESPN and in the local Milwaukee media. But there was another new high reached last week, and this one is right up our alley. As you can see in the chart below, the Russell 2000 small company stock index has powered higher since the end of October. 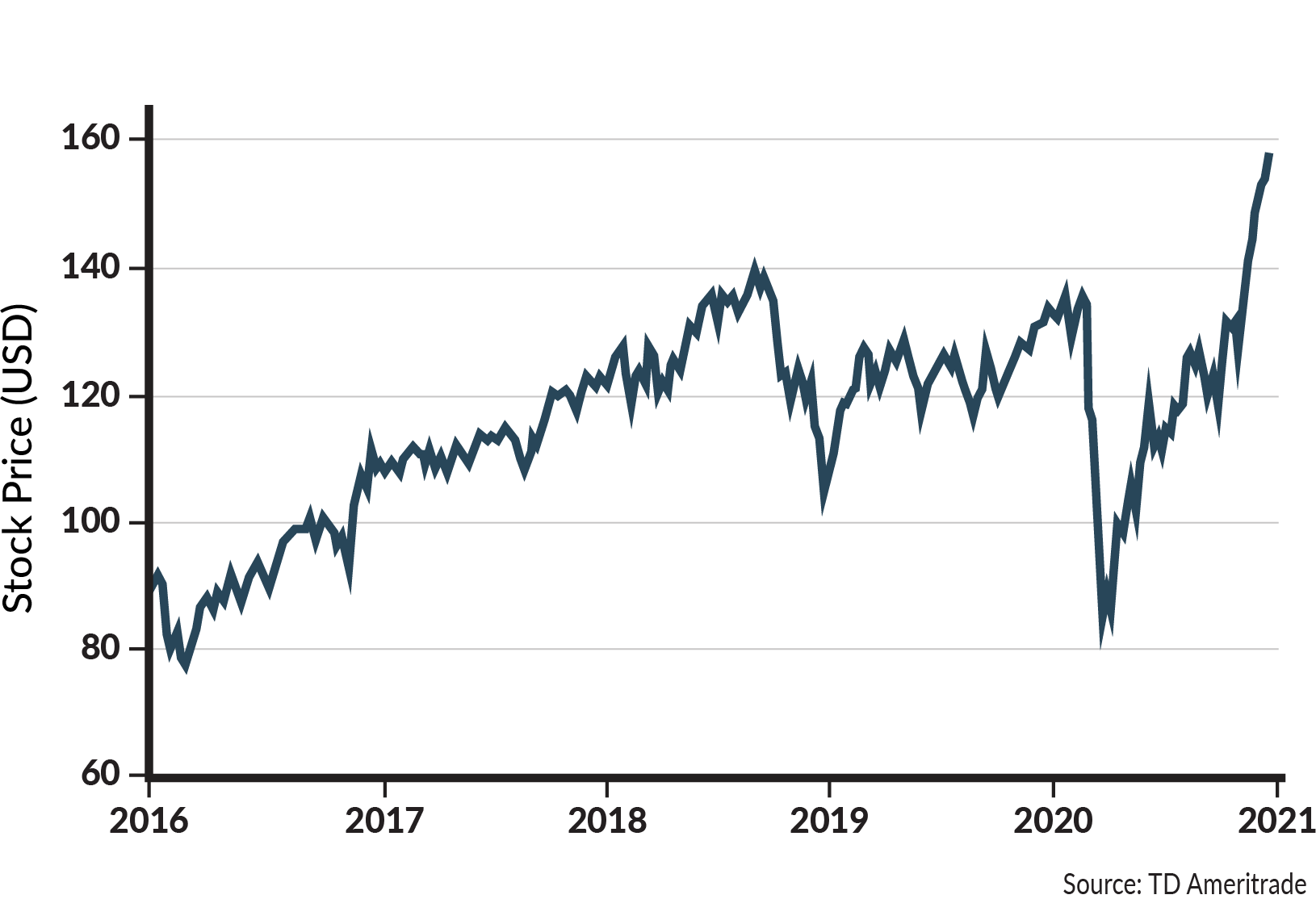 Also, Tesla’s stock was added to the S&P 500 Index yesterday after running up over 670% this year. Are these signs of an expensive stock market, or are they reflective of a different paradigm affecting markets?

The Russell 2000 stock index represents companies whose market capitalization (number of shares outstanding times the price of the stock per share) is generally less than $2 billion. These are companies that cover all sectors and many industries and are generally thought to best represent activity in the U.S. economy. The top ten index names include companies such as Ceasars Entertainment, Mirati Therapeutics, Sunrun and Novavax. Not household names like Amazon, Microsoft, and Apple, which are among the top ten names in the S&P 500 Index.

And indeed, economic growth estimates for next year have risen. By the end of next year, consensus estimates for annualized economic real growth are greater than 5%. Perhaps a level not seen since the early 1980s.

Investors’ presumption is that the global distribution of a vaccine will begin to remove the closures most affecting the U.S. and European economies and produce a strong recovery. This will occur while the economy is also benefitting from pent-up demand resulting from the 2020 slow-down.

We believe that news of the vaccines efficacy and distribution have been priced into markets as if there won’t be any issues. However, we understand that distribution challenges will occur, vaccinating millions could produce some negative side effects reducing the number of people getting the vaccine and delaying “herd immunity.” In other words, there is a lot to play out with respect to the pandemic—and we shouldn’t take the market’s positive reaction at face value.

With that caveat in mind, we have to recognize that this additional round of stimulus, like the last, will produce a hole-patching result that will get the economy to the other side of the pandemic. The resulting acceleration in economic activity due to pent-up demand is likely. In addition, the secular trends we’ve discussed in the past regarding productivity improvements, labor market strength and a new generation of consumers are still in place and perhaps will provide additional fuel to the economic rally late in 2021 and into 2022.

Tesla, the electric car company, was added to the S&P 500 Index on Monday. This is important because mutual and exchange-traded funds that mirror the index need to acquire the company’s stock in order to rebalance their funds with the new holding. This activity has created some additional volatility for the index.

As noted in our last piece, Tesla is not an inexpensive stock. Investors have moved a tremendous amount of money into the stock, causing its price to rally more than 670% this year. As a result, it will be one of the more expensive stocks in an already somewhat expensive index. Tesla represents 1.58% of the index as of yesterday and is the seventh-largest weighted company in the index.

As the pandemic began, there was an expectation that earnings for the companies in the S&P 500 Index would drop by 25% or more. As we’ve moved through the year—and now understand that the global recovery is uneven and “shutdown” removed from our lexicon—the expectation is that earnings outside of hospitality industries will drop by less than 10% and recover quickly moving into 2021. This has led to the stock market rally and a stronger recovery in prices to the point where all major indices that represent U.S. equity markets have achieved new highs.

Where Does An “Expensive” Market Go From Here?

Our view is that while the potential for a strong continued recovery exists, the caveats mentioned earlier also represent potential issues we’ll monitor into the new year. However, as importantly, not all stocks in the S&P 500 have performed like Tesla. There are many companies, big and small, that remain undervalued based on the potential for a strong economic recovery in 2021. This is the primary reason we own a diverse portfolio of stocks!

While we applaud the Milwaukee Bucks for securing Giannis’ abilities for another five years, and don’t have an opinion on that value, we do pay close attention to the economy’s run rate and the impact it has on asset price values. Our diverse approach means that we will attempt to not over-own those expensive parts of the market in favor of those that have remained undervalued.