I saw a strange movie last weekend called The Banshees of Inisherin. The film has a 92% Rotten Tomatoes rating (very good) and an 87% Metacritic score, suggesting universal acclaim by both average moviegoers and critics. I thought it was a dud.

I think I was most annoyed by the fact that the stunning cinematography (the film takes places on an island off the coast of Ireland) and phenomenal acting was wasted. Colin Farrell and Brendan Gleeson play long-time drinking buddies (Irish Pub-style) whose relationship has soured amid the latter character’s reflections on mortality. There were many promising roads this story could go down, but the one it chose was both unexpected and unsatisfying. The best part of the movie for me was a cute miniature donkey named Jenny.

It seems to me that a bad film is a decent metaphor for what investors have experienced this year. Bond investors, in particular, have faced an unexpected and deeply unsatisfying storyline. Sure, we knew bond yields were low to begin the year, and we cautioned investors to expect muted returns from fixed income. However, few foresaw unrelenting inflation and one of the fastest interest-rate hiking cycles in history.

“Have my bonds helped?”

During a portfolio review recently, a client asked me, “Have my bonds really helped me at all?” He was asking if the diversification among stocks and bonds that we often preach was working. My answer was no doubt unsatisfying: “Yes, but not nearly as much as you would expect in a normal stock market drawdown.”

As the chart below illustrates, the most widely followed bond index, the Bloomberg Barclay’s U.S. Aggregate, was down 15.72% through October 31, just slightly better than the S&P 500’s 17.72% decline. Core bond portfolios with shorter average maturities fared better than the Aggregate Index, but nonetheless it’s true that bonds and stocks have moved together in the wrong direction for most of the year. 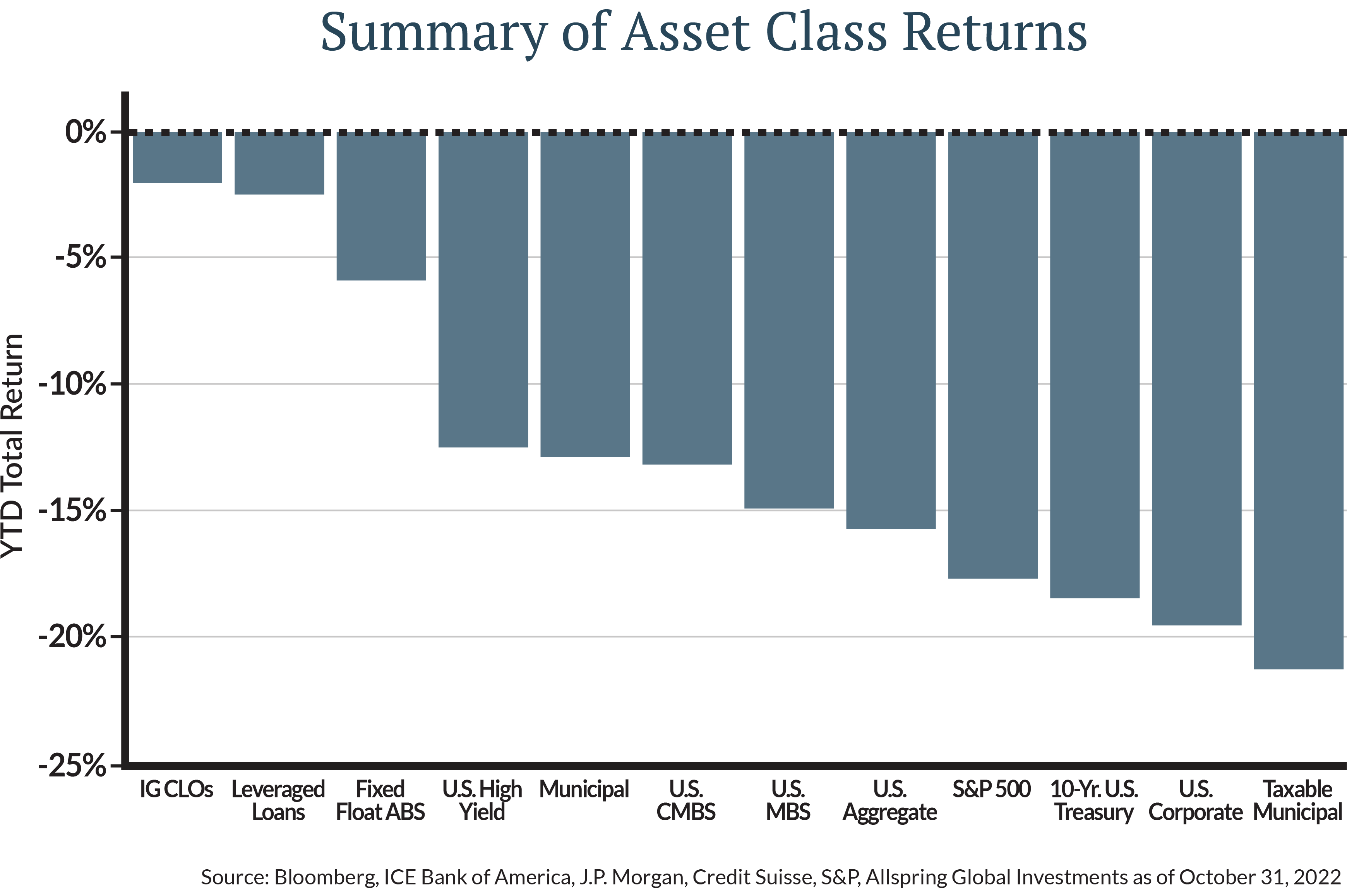 After this painful rout across equity and bond markets, investors are wondering where the plot goes from here. I think we had a clue November 10, when the October CPI report showed that inflation rose at the slowest pace since January.

The inflation index increased 7.7% in October from the same month a year ago, down from 8.2% in September and materially below June’s 9.1% pace. This was the best evidence yet that the Fed may be making progress on its mandate to restrain price pressures. The S&P 500 shot up more than 5.5% in a single day, and Treasury yields fell dramatically. Falling yields translate into higher prices for bonds, meaning that both stocks and bonds had a historically good day.

I don’t mean to suggest that the markets are now off to the races and there won’t be any more pain ahead. Inflation is coming down because the economy is slowing. A slowing economy means higher unemployment and possibly a recession in 2023, which could crimp corporate profits. But the inflation report and investors’ reaction to it showed us light at the end of the tunnel and restored faith that this story will have a happy ending.

Indeed, for long-term investors looking forward, the multi-year setup is as attractive as it has been in years. Higher starting yields and lower stock valuations mean that stocks and bonds have the potential to deliver long-term returns more in line with historic averages.

We sometimes cite JP Morgan’s Long-Term Capital Market Assumptions when talking about expected market returns. JP Morgan and other research firms annually publish long-term forecasts for different asset classes based on current market conditions and certain assumptions about the future, such as GDP growth and inflation expectations. Last year, amid low yields and high stock valuations, JP Morgan anticipated long-term returns from a balanced portfolio of stocks and bonds of about 4.3% per year on average. As of September 30, with bond yields over 3% higher than they were to begin the year, and stock valuations lower, the forecasters had increased that number to 7.2%/year for a 60/40 portfolio. 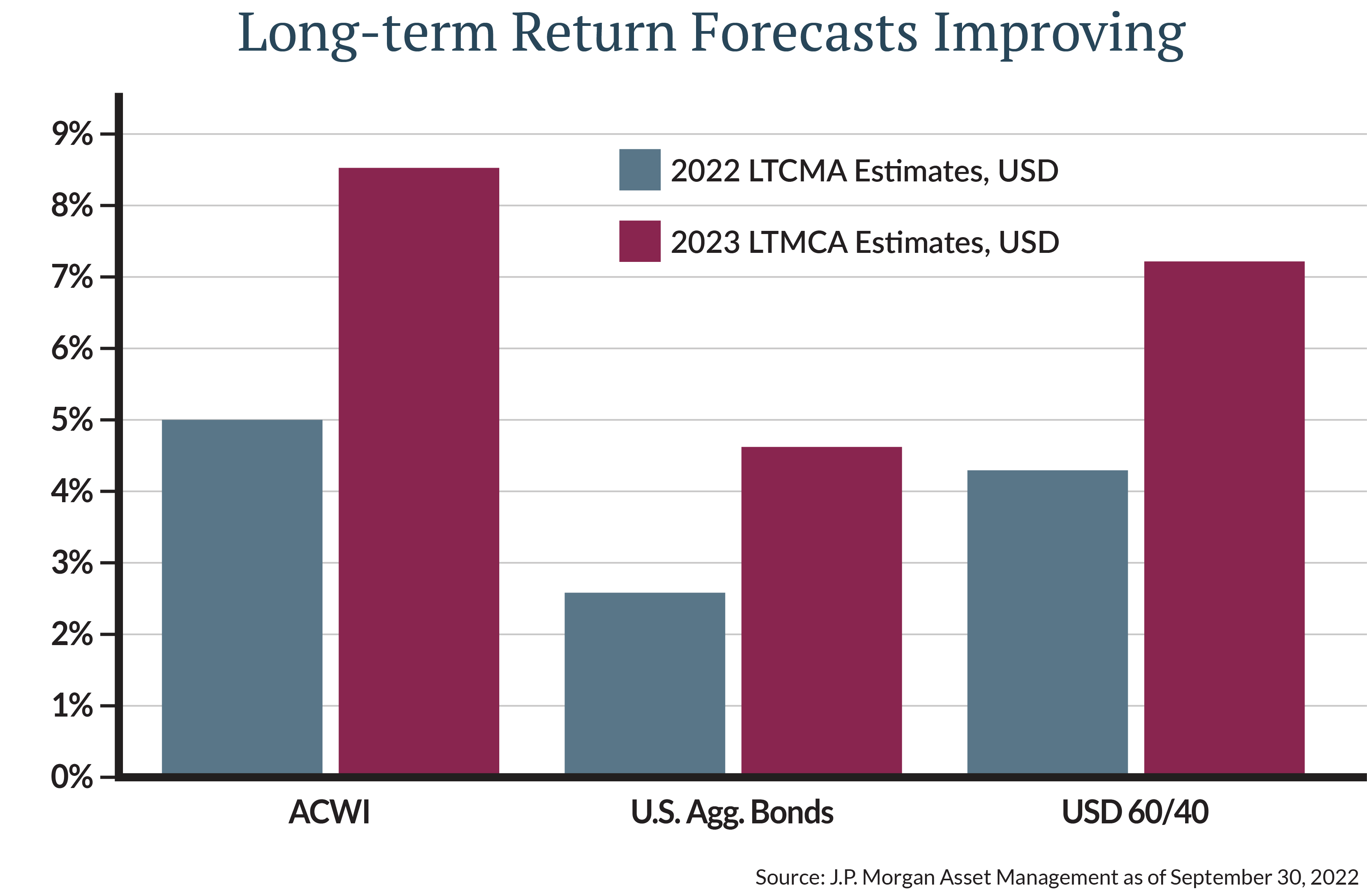 We cannot, of course, predict the future. Like the weather in Ireland, markets can change quickly from day to day, but the farther out we look, the clearer the way forward appears, and the multi-year story to come may please even the harshest critic