Election day is over, and the outcome of the Presidential race remains undetermined. However, control of the Senate looks much less likely to turn to the Democrats, and so the prospects for a larger fiscal stimulus package seem to have passed.

Markets have traded on three things for the last several months. The election outcome, pandemic news on infections and the probability of a vaccine, and the likelihood of another major fiscal stimulus package from the Federal government. Let’s review each of the three major market-moving issues, starting with fiscal stimulus.

As election day drew nearer, it became more obvious that a package would not be hashed out. Now that the election is over and the “Blue Wave” failed to materialize, bond investors are presuming the package will be smaller than a Democratically controlled White House and Senate would have passed. 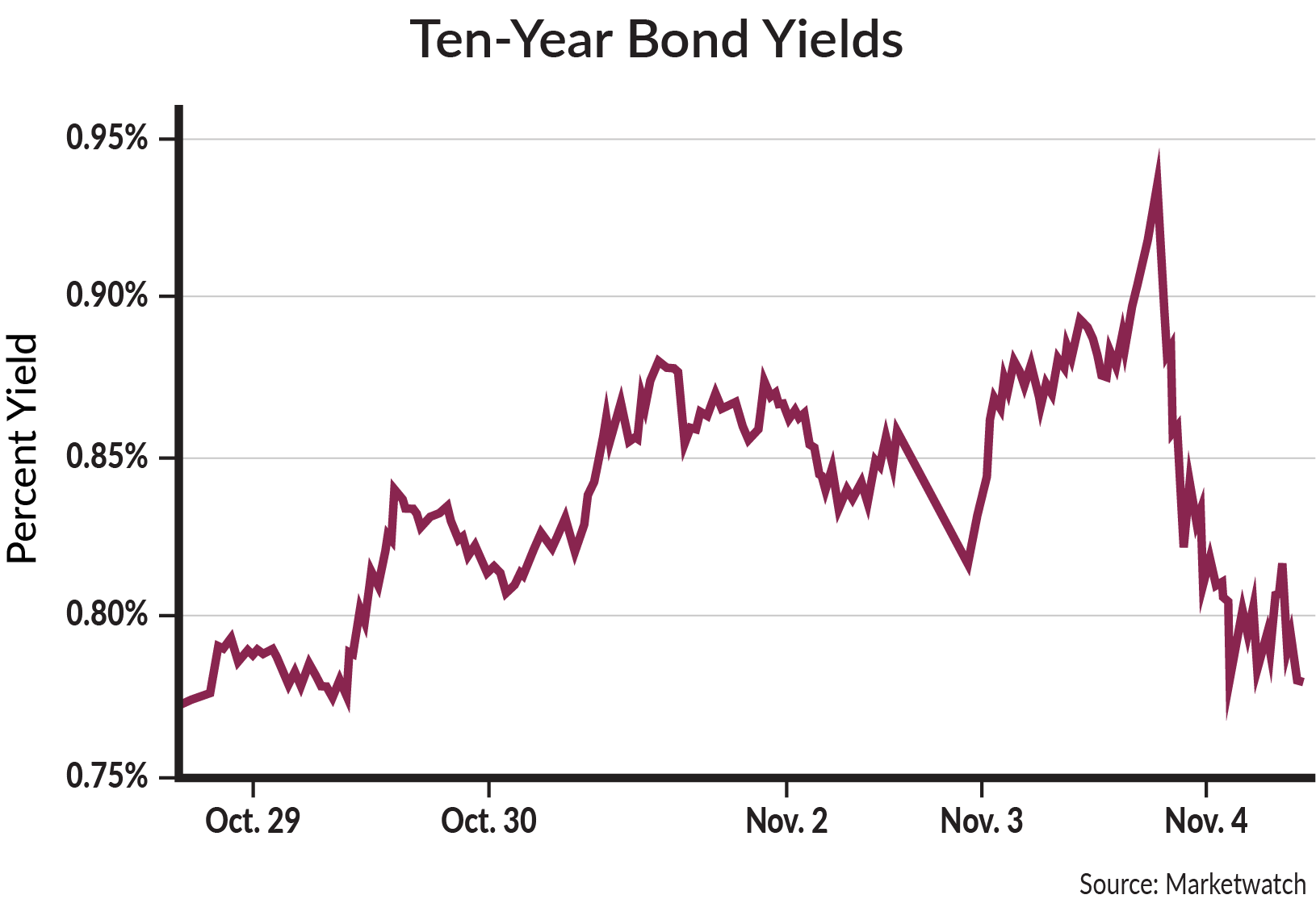 During the early days of the pandemic, the federal government and Federal Reserve passed stimulus and market programs amounting to almost $9 trillion, nearly half of our annual economic activity. Much of this went to help small businesses and individuals who lost jobs as a result of business closures. As a result, the last quarter’s GDP (a measure of economic growth) rebounded 35% after declining in the second quarter by 33%. Still, stimulus of this magnitude will take much more time to work its way through the economy and for us to know its full impact.

The packages passed to date have resulted in the Fed’s balance sheet growing by $4 trillion. This is because much of the government’s spending was borrowed money. The Fed issued Treasury debt and bought it to produce the cash. This leaves much more of the Federal government’s debt in the hands of the Fed.

The recent rise in bond yields was a result of bond investors betting that Democrats would win control of the Administration and the Senate, likely raising the size of the next stimulus package. That seems less likely now as it appears the Republicans will either control the Senate or it will be split 50/50 with the new President’s Vice President being the tie vote.

The prospect for deficit spending is still there regardless of who wins the Presidential election. However, while only a few, the deficit hawks have suggested that any additional stimulus be much more targeted to those specifically in need and less broad based.

On the pandemic front, there are a number of companies moving through phase three clinical trials, making the likelihood of a vaccine in 2021 more likely. The head of the Administration’s Operation Warp Speed has been quoted as saying that there is a possibility that over half a billion doses will be available by June of next year, if the trials are successful. In the meantime, markets will react to the rise in infection rates.

In Europe, countries are beginning new measures to reduce individual mobility as they see infection rates rising. Here in the U.S., we see less of an impact on consumers as infection rates have risen and mobility data doesn’t show a subsequent decline in activity. The chart below shows that while still below the baseline from February, rates have not declined in the last several weeks as record-setting infections have taken place. 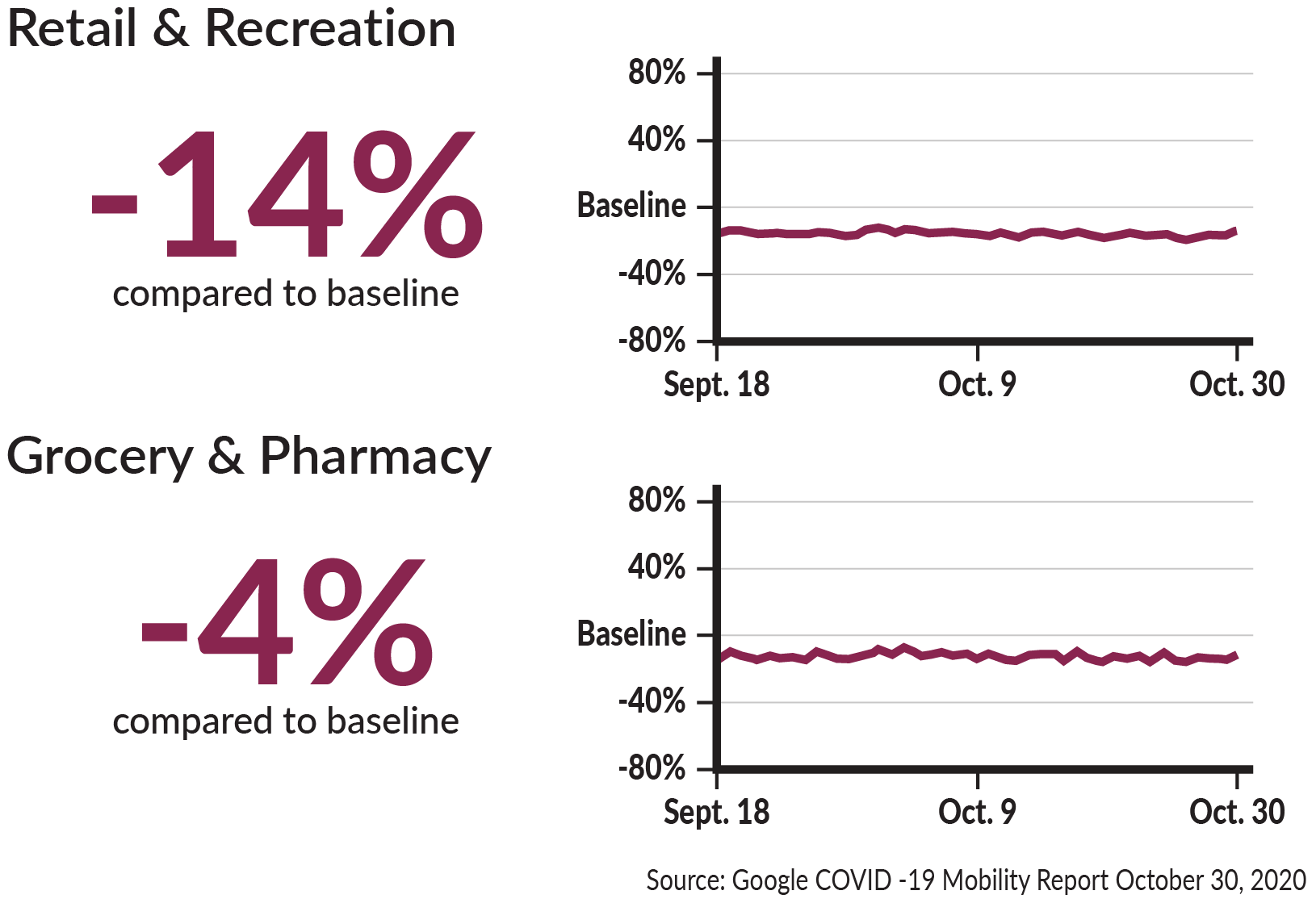 We will continue to monitor this behavior, as it will impact both asset prices and future economic activity. Consumer sentiment has also continued to rise suggesting that people feel better about future income (last reported to have grown by almost 2%) and job prospects. More than anything, improvement in the unemployment rate, job creation and increasing personal incomes from a recovering economy will buoy stock market prices.

Markets will see an increase in volatility if the rhetoric suggests a protracted debate over who won, where and using what vote count. However, with tens of millions of voters using an absentee process, and many states requiring that those votes be counted after election day ends, it shouldn’t be surprising that large cities in contested states haven’t completed the count. We should know more by Friday. While the President is already pushing back on the outcome, it isn’t predetermined that he won’t win reelection.

We will all be treated to another civics lesson regarding the fact that states voting laws differ and so during national elections, outcomes and processes are not consistent.