A Body in Motion

When did physics become a 7th grade thing? During a recent review with my son, I found myself doing my own studying to keep up with what he was learning. Among the more complex topics, however, was something I’m familiar with: Newton’s law stating a body at rest will remain at rest unless an outside force acts on it and a body in motion will remain in motion in a straight line unless acted upon by an outside force. This got me thinking about momentum and its application to asset prices.

After trying to explain to him that asset prices could sometimes look like that body described in physics, I decided to leave the finance for another day and have him stick to his studies. You’re not so lucky.

Stock prices’ movement can be dominated by momentum. That has certainly been the case this year, and for some time before. Momentum investing can be defined simply as buying a stock whose price has already been rising. The faster the rise, the more the momentum—and so, much like Newton’s law, the thinking is that those prices will continue to move up in a straight line unless acted upon by an outside force.

Of course, there are many “outside forces” that affect stock prices, and so a straight line can never be had. They can include: economic, company revenue and earnings information, investor sentiment, industry news and so on.

This year, the S&P 500 Index of stocks is up over 10%. The exchange traded fund (ETF) for momentum (ticker symbol MTUM) is up double that, indicating that high-momentum stocks are leading the way upward. 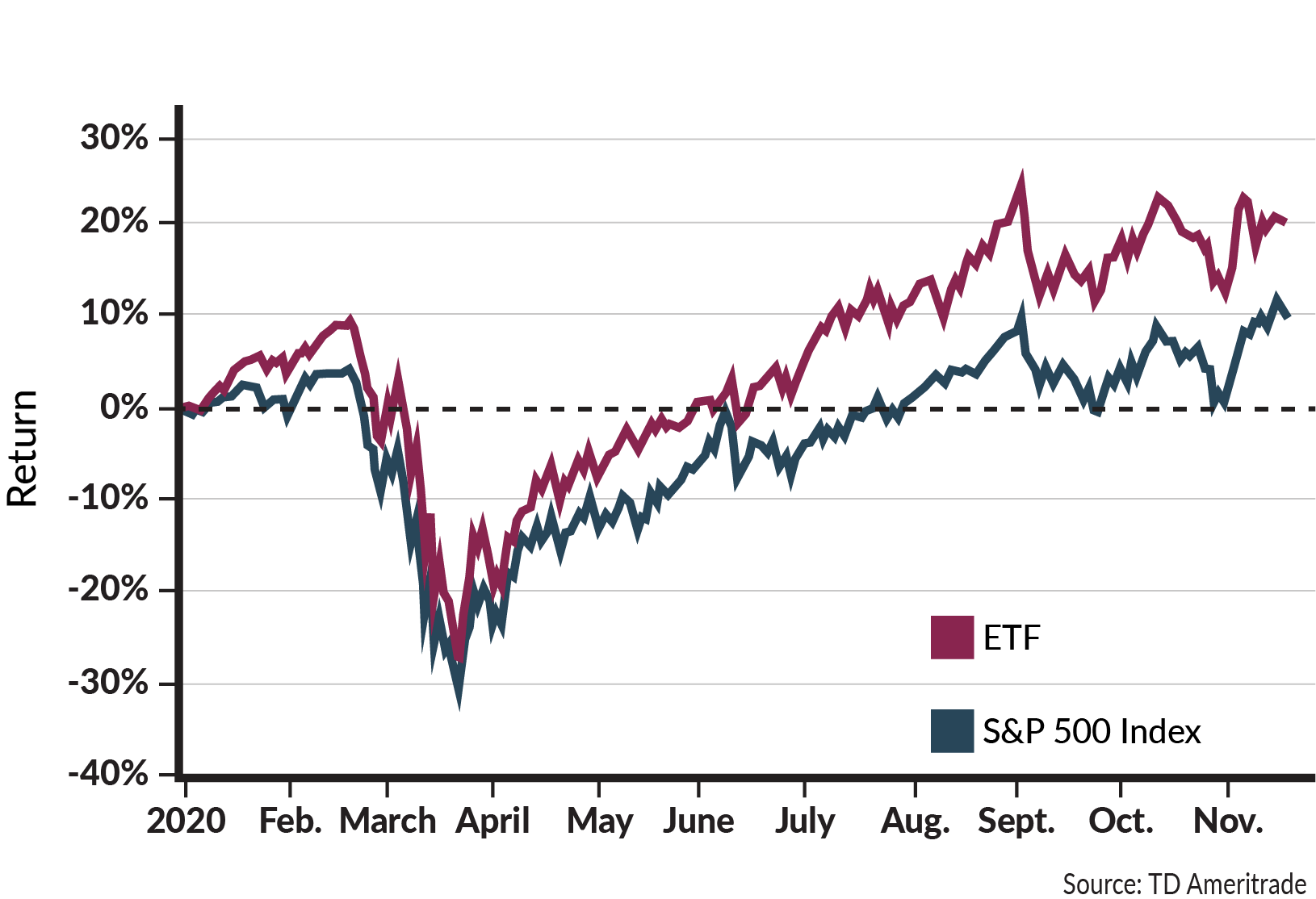 The top five holdings in this index ETF are Tesla (the 2020 leader of momentum plays), Apple, Nvidia, Amazon and Microsoft. Even the casual stock observer would have guessed a few of these.

Tesla is up a whopping 416% since the beginning of the year. It is the quintessential definition of a momentum stock. People buy it because it is going up. Not because it trades at 880 times earnings (the S&P 500 stock index currently trades at 24 times earnings and some say that’s expensive!).

Ford’s stock price is down 6.5%. Of course, F-150s aren’t electric, but the brand is iconic. The point is, Tesla has momentum, Ford doesn’t. Momentum moves stock prices even when the fundamental information regarding earnings and revenue growth don’t support the move.

Momentum is a “factor”—in other words, one of many things we can measure, watch and use to our advantage as investors. However, because it is based on sentiment, not fundamentals, it would be risky to hold too many stocks driven by momentum in portfolios.

This year, the top five stocks in the S&P 500 Index account for much of its performance, more so since the sell-off ended in April. These stocks all have momentum. Since they have propelled the index higher, you can argue that the index has momentum and a way to own more of the factor is to own more of the index. In our case, we have continued to own the index in the form of a mutual fund or ETF for this reason.

Investor sentiment drives momentum. This year, company stocks like Amazon, Apple, Netflix and Alphabet (Google) have benefitted from the “stay at home” trade. Investors have piled into stocks that have benefitted from more than a third of the U.S. workforce working from home and many more people limiting their outside activities.

At the same time, investors have avoided companies who don’t benefit, or where the risk of better revenue and earnings growth appears greater. These stocks don’t have momentum in their favor and as a result, have not performed as well.

In the last two weeks, we’ve heard from Pfizer and Moderna that their COVID-19 vaccine programs have produced successful outcomes during phase-three trials. The efficacy of these vaccines during the trials has exceeded 90%, while investors had been thinking it would be less than 70%. That is likely one of the reasons the market has rallied on the news. At the same time, we’ve seen those stocks that were not in the momentum category do much better on the news. Investor sentiment has turned to the economic recovery as the two pharmaceutical companies have indicated that they anticipate having over 1.5 billion doses of their vaccine available in 2021.

Stocks considered “value” because of the industry they are in, or because of where their price is relative to their earnings, have begun to perform much better.

All of this suggests that understanding which factors we have exposure to, and determining when to own more or less of them, is as important as determining how much money to put in stocks, bonds, cash or other asset classes. We review our factor analysis every month and use the information to make investment decisions. That analysis combined with our research on those “outside forces” affecting prices put us in a better position to meet client objectives.

Actually, I find this all to make more sense than 7th grade physics. Maybe he’ll teach me physics and I’ll teach him a bit about multi-factor analysis for equity prices.