I Miss the Elf—and the old Jerome Powell

My son turned 15 this year, so while the Elf on the Shelf will make his way out of the box, he won’t be entertaining anyone. No moving about the house, donning different outfits and waiting to be discovered in the morning search. Now the Elf sits on the mantle overseeing, though not really participating, in the Holidays.

Chairman Jerome Powell, the head of the Federal Reserve, reminds me of the Elf. I miss the old Chairman. The one who wanted to provide stimulus so investors could pile into risk assets and watch them appreciate in value. The one who started the bond-buying program to create more liquidity in the financial system, supporting asset prices. The one who seemed to support markets every time they turned down. The new Chairman Powell is a bit more like the current Elf in our household. Dour, not looking for fun, and in fact reminding me regularly of when we had better times.

The Federal Reserve’s Open Market Committee met this week and decided to raise its benchmark federal funds interest rate by another 50 basis points, or one-half percentage point. This moves its target rate to between 4.25% and 4.5%. We started the year near zero. This week’s move was well anticipated by markets, so the impact of the hike was minimal. 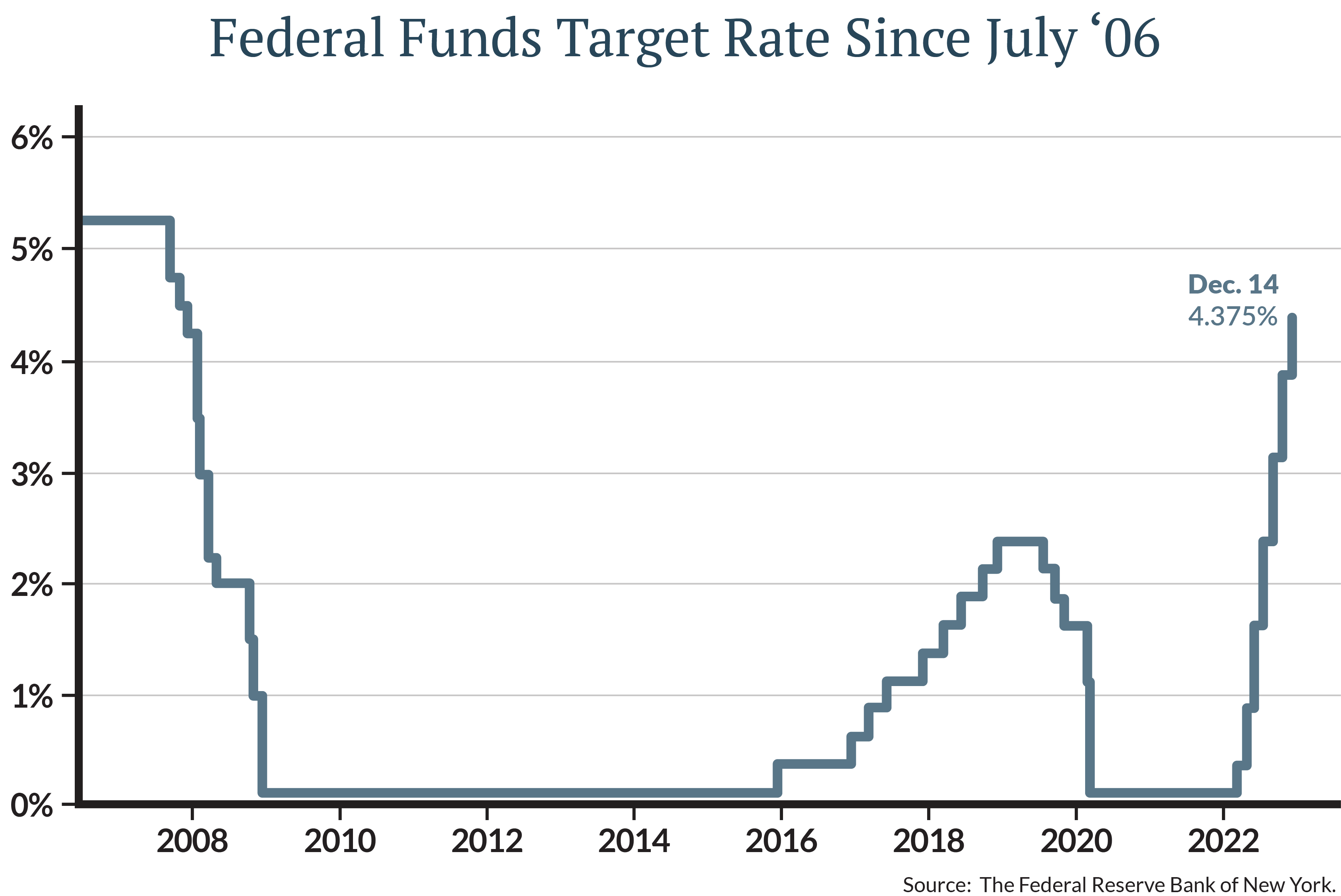 However, the new Elf indicated that rates would move higher and remain so for longer, suggesting that a rate decrease may not be in the cards until 2024. The Committee now shows consensus around a rate of 5.1%.

While recent inflation reports have showed price increases slowing, the Chairman said “…it will take substantially more evidence to have confidence that inflation is on a sustained downward” path. For now, the Fed’s statement indicates that it will continue to raise rates.

What does it mean for now

The Fed is concerned about 1970s-style stagflation: an environment where the economy softens and inflation moves up and down, never quite getting near the target level of 2%. Stagflation is a poor time for stocks as the variability and higher level of inflation hurts companies’ ability to pass along price increases reducing earnings.

This week’s message from the Fed boils down to we will remain vigilant. Regardless of the impact on risk assets, the Fed anticipates hiking interest rates until the level of inflation meaningfully improves.

We’ve talked about the need to see a higher unemployment rate to reduce wage pressure. The rate remains stubbornly below 4%, and job creation over the last three months has averaged 272,000. Some believe this latter figure needs to decline to 100,000 per month for wage pressure to be reduced.

For now, we’ll take the Fed at its word and expect short-term interest rates to move higher. We’ll watch for the full effect of those higher rates as we move through the first half of 2023. Rates started increasing almost 12 months ago, and their effect generally takes 12-18 months to begin to be realized—likely making this next six months volatile.

You can see this volatility in stock and bond trading this week. As the market has digested Fed-speak and now the rate hike, the 10-year Treasury yield has traded between 3.6% and 3.4%, a rather large range for a week’s time. In addition, the S&P 500 Index has traded in a 4% range as news regarding the Fed’s path forward has emerged.

For 2023, we expect volatility to remain elevated, which creates opportunities to leverage potential downturns in asset prices. We remain more defensively positioned in equities and continue to believe more interest rate risk can be taken when yields on intermediate bonds are at the high end of their recent range.

A word on China. Its government has moved quickly in the last two weeks to begin to reopen the Chinese economy and allow citizens to move about the cities. Commensurately, China is seeing an increase in infection rates and hospitalizations. It’s also working to vaccinate the most vulnerable population with a second round. With the Chinese New Year coming soon, the government is likely to allow more movement within the country. Many travel home—and haven’t been able to do so since 2019.

All of this activity could boost both Chinese and global growth. It is too early to tell how China’s plan will work and what impact it will have. We’ll have to watch it closely to see if it boosts growth and further eases supply chain problems.

On elves and outlooks

In 2023, we’ll likely see lower corporate earnings, possibly slower growth and a decline in inflation. We don’t believe it is likely inflation will come down to 2% in that period. This means the somber new Elf may continue sitting austere on the mantle.