As smart as a fifth grader? U.S. and China trade tariffs explained

Last week, I was helping my son study for his fifth grade history exam. His class has been learning about the development of societies as they study ancient Mesopotamia. He told me about Shamshi‐Adad who ruled Assyria from 1813 to 1781 B.C. He understood the importance of trade and how it could benefit the place he ruled. As we reviewed the exam information, it was interesting to see how the city states of that time learned to use trade to their advantage. Of course, with trade in the spotlight for investors, I couldn't help but draw comparisons to our own time.

The U.S. and China, the world's two largest economies, have been in a year‐long dispute over trade. Last month, President Trump delayed an increase in tariffs (from 10% to 25% in many cases) that were scheduled to begin March 1st indicating that “substantial progress” had been made. The President noted that progress has been made in the areas of “intellectual property protection, technology transfer, agriculture, services, currency…” Improvements in trade talks have partially fueled the stock market rally we've experienced since the beginning of the year, so the current state of affairs bears watching.

China accounts for half of the U.S. trade deficit even though the volume of trade nearly matches that of Mexico and Canada. In addition, after years of U.S. companies losing intellectual property and technology to the Chinese, some have cried “Enough.” As a result, one of the Administration's policy pillars was to improve trade relations with China, address the size of the deficit and the issues surrounding safeguarding technologies.

This is a difficult prospect because U.S. policy makers play a short‐term game, from election to election cycle. On the other hand, the Chinese are allowed to play the long game, benefitting from the uniform power of the communist party. 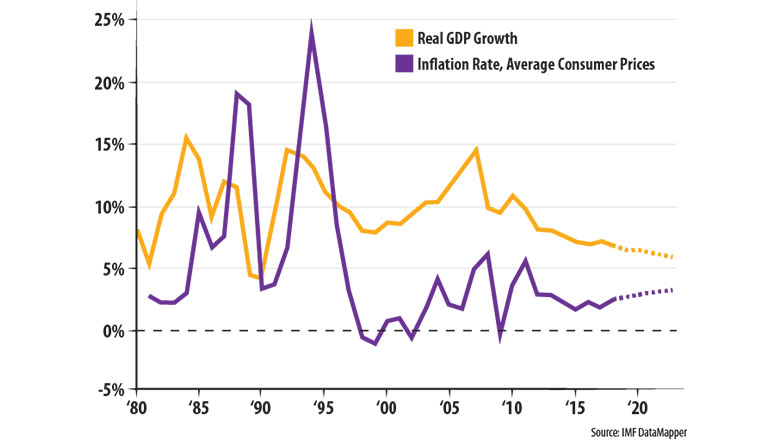 In January, the IMF updated their 2019 forecast and indicated that global economic growth would be slower than anticipated months earlier and lowered their forecast by almost 6%. They specifically cited “global risks tilt to the downside” indicating that “an escalation in trade tensions (between the U.S. and China) remains a key source of risk to the outlook.”

While we wait for news of a trade deal, we would expect that the stock market will appreciate on any news from the Administration and Xinhua (Chinese news agency) that suggests progress. More than likely, the deal itself—if anything like the USMCA (the Mexico/Canada deal which has yet to be ratified by Congress)—will fall short of the most optimistic expectations. However, if it leads to the resumption of purchases of agricultural products and a reduction in tariffs between the two countries, it will be seen as progress. The big question will be whether or not there is meaningful change with respect to intellectual property protections and technology transfer.

Earlier this week, White House officials announced that U.S. Trade Representative Robert Lighthizer and Treasury Secretary Steven Mnuchin will travel to Beijing next week, and a Chinese delegation will travel to Washington the following week, with the hope of working through the remaining unresolved issues in the trade deal. President Trump told reporters this week, “talks with China are going very well.” The trade war has been costly to both the U.S. and Chinese economies and as we move closer to the 2020 election, President Trump has a strong incentive to reach a deal. The President said that there would be news on China “one way or the other” over the next three to four weeks.

A summit between President Trump and President Xi Jinping may take place sometime in late‐April when the two countries could potentially announce a formal accord. If the remaining difficult issues cannot be resolved and a deal is delayed, then it is possible that higher tariffs will occur—this is certainly not priced into stocks of affected companies, and volatility would resume. The President seems keenly aware of the fact that stock market participants are watching this deal closely and said earlier this month that markets will experience “a very big spike” as soon as the trade deal is complete. Finalizing a deal is the base case scenario, but it is the details of any deal that will ultimately determine the market's response.

While Mesopotamian rulers had force as their friend when it came to trade, we suspect current societies will forgo this avenue and focus more on making a deal. Nonetheless, asset prices will move with the winds of change as we learn more about the possibility of a trade deal with China over the coming weeks.