A Confluence of Concerns

Kids are back to school, employers are asking employees to return to work, COVID infections are on the rise again and the football season is here. And the Packers dropped their first game in a big way. This confluence of events has created more stress for parents, workers, health care providers, companies and Packers fans!

The stock market seems to be stricken by a similar confluence of events that requires some sorting out. On Monday, the S&P 500 stock index dropped over 150 points or nearly 4% (see chart below). Before Monday, it was 5% from the all-time high.

Naturally, everyone wants to explain the market’s action. For us, the drop reflects a confluence of concerns that affect monetary and fiscal policy, economic growth and companies’ ability to generate earnings. Add to this the Chinese government’s desire to alter the course of their $17 trillion economy, and you have the makings of a volatile September-October timeframe. 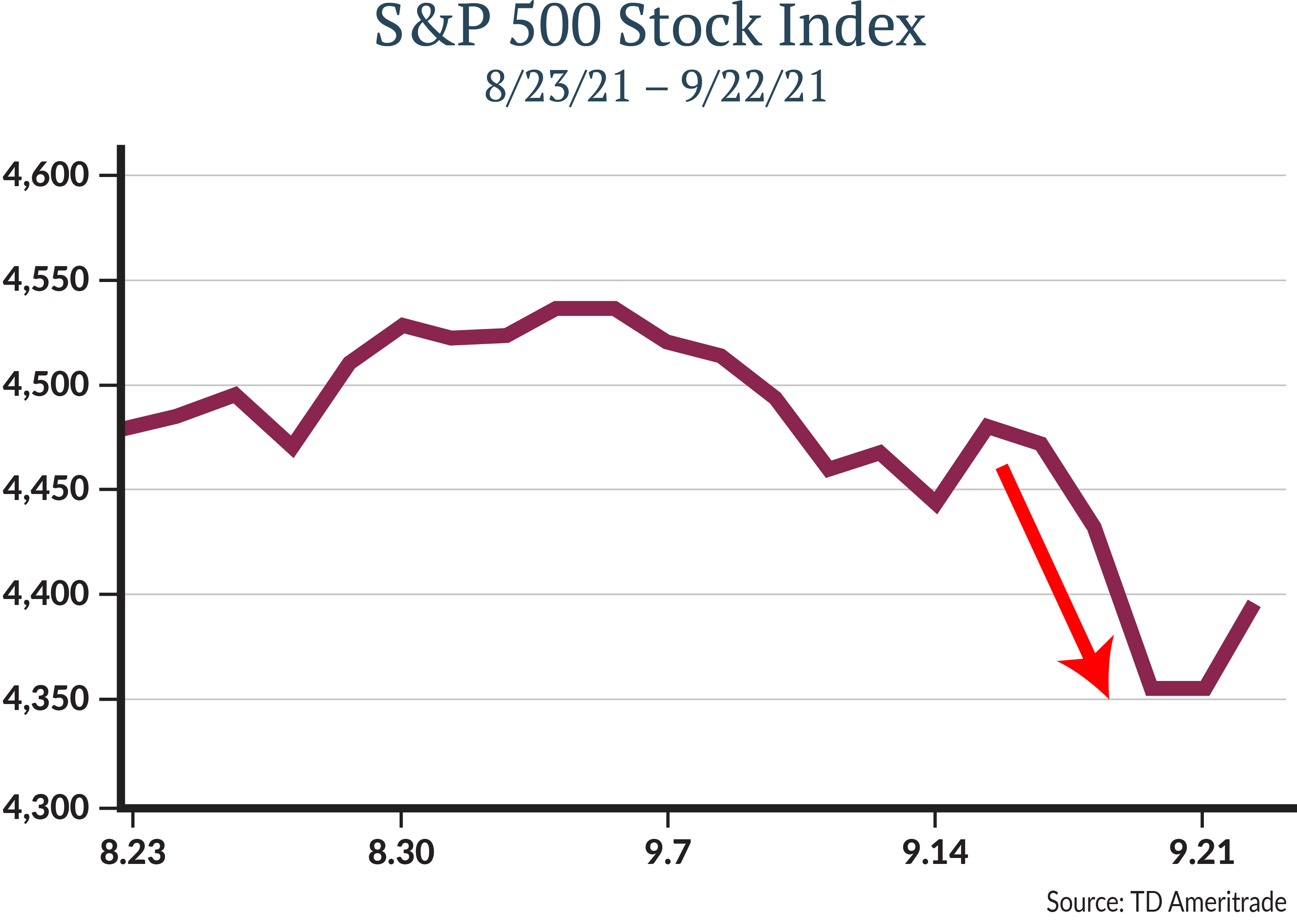 We have noted over the course of this year that the size of the Federal Reserve and federal government’s interventions into the economy make them the only things that matter. This means that when a change is in the wind, investors will pay close attention to how it unfolds.

Each month the Fed buys over $100 billion in bonds to inject liquidity into the financial system. (When the Fed buy bonds from banks, they are replaced with cash, expanding both the Fed’s and the banks’ balance sheets.) This injection is meant to create an environment where banks have cash to lend, thereby keeping the economy well oiled.

As recently as yesterday, the Fed discussed its future plans for reducing their bond purchases (i.e., “tapering”) and eventually raising rates. The message from the Fed was “not so fast,” meaning it will continue to take its time to do both. Markets have rallied a bit on this information.

We believe the Fed is being too cautious, and with prices rising and the economy recovering globally, there isn’t a need to continue promoting easy financial conditions. Each month the Fed continues the current pattern makes it more difficult to remove the liquidity later.

For the last two quarters, the U.S. economy has grown at a pace above 9%, reflecting the snap-back from the pandemic. No one expects this rate of growth to continue. Future growth expectations have been muted, with estimates for growth in the third and fourth quarter of 2021 down by more than 30% since the beginning of the year. Most of this can be attributed to the challenges associated with the pandemic’s delta variant and a reduction in activity as well as the dramatic supply chain issues many companies are experiencing. We’ve recently written about these challenges.

As the twin challenges of the delta variant and supply-chain strains abate, the economy will return to a faster growth rate throughout next year. Certainly, the Fed’s actions bear watching; however, they won’t likely create a lot of disruption in the bond market unless the Fed waits so long that it gets significantly behind on inflation management.

The federal government has spent an enormous amount of money supporting the economy over the last 15 months. Estimates show that the economy shrunk almost $3 trillion due to the pandemic—and it spent twice that.

Now the government proposes to spend another $4.5 trillion over the next 8-10 years for infrastructure and social programs. Many would suggest that this isn’t needed or is at the least ill-timed.

Investors wonder about two things: how will it affect economic growth and what will be done to pay for it. Government spending provides stimulus to the economy. However, it is clear the amount of spending is still in question, which means the amount of stimulus remains out of focus. We believe that even if passed in total (not likely) the extra $450 billion per year won’t have a meaningful impact on total economic growth.

The tax bill that pays for the stimulus will also cause investors concern. To the extent that corporate tax rates are on the table—and they are—stock investors will worry about the impact on earnings and profit margins.

Add to this the debate over the government’s debt ceiling, which also needs to be wrapped up soon, and you have a fiscal policy mess that will add to investors’ concern until there is more clarity.

It has been almost three months since we had the big companies report earnings. As we approach the October earnings reporting season, stock investors are worried about what they will hear regarding profit margins and revenue growth.

We expect we’ll hear more about supply chain issues reducing the ability to sell products and that price increases are putting pressure on margins. However, we believe that price increases will be easier to pass along because demand is so high and that will likely be good for earnings over the next 12 to 18 months.

Until earnings season begins, this will add to the volatility given the uncertainty.

The topic of China will be a future commentary by itself. For today, let’s focus on several incidents that have roiled markets and why they affected Monday’s stock market selloff.

China has a conundrum. It has experienced tremendous growth for over 20 years. However, for the last several years, economic growth has slowed as the industrialization benefits waned. Add to that the Chinese government’s desire to curb capitalist excess and there is bound to be disruption in Chinese and (due to their size) global markets.

Estimates are that almost 30% of the Chinese economy is driven by real estate. During the last 20 years, the urbanization of China has resulted in over 400 million people moving to urban centers. Those people need a place to live, and that has driven the markets to speculation and the use of leverage. Sound familiar to 2007-2008?

As the Chinese government knows, many of these developers fund local infrastructure spending through the purchase of land for development. However, the excesses in this market, fueled by cheap funding, are tremendous given the size of the country’s economy and population.

There is an old Chinese saying that you need to “kill a chicken to scare the monkeys.” And that is why you’ve been hearing so much about Evergrande, the second-largest real estate developer in China, which has over $300 billion in debt. This could be the chicken. However, it appears as though the government already recognizes the issues a failure of this size could cause as it has been injecting liquidity into the banking system this week to reduce those concerns. Nonetheless, shades of the real estate crisis from 13 years ago put investors on edge and contributed to the recent market volatility.

We don’t believe that this will create the same kind of contagion we saw at the time of the Global Financial Crisis. However, it will have ripple effects throughout the emerging debt and equity markets. And may perhaps provide some opportunities to buy affected companies’ securities at lower prices.

All of this presents reasons for investors to worry. After a run-up of nearly 20% in equity prices so far this year, it is about time investors noticed that everything isn’t perfect. However, we don’t believe that these issues will cause growth to unravel or inflation to run rampant, and so we’ll watch for opportunities created as a result of an overreaction to any of these events.