Wisconsin Could See Economic Slowdown This Year, Not Recession

The economic growth Wisconsin experienced in 2018 will likely slow down this year, but the state is not headed for a recession in 2019, says Brian Andrew, the chief investment officer with Racine‐based Johnson Financial Group.

About 620,000 of the state's 3 million jobs are in manufacturing and construction. Health care and education jobs account for about 450,000 jobs in the state, Andrew said.

The southeastern, northeastern and west‐central regions of Wisconsin are the best positioned for growth in 2019, Andrew said, because that is where those industries are the strongest.

“If you look at Wisconsin's economy relative to the national economy, we're doing better in terms of unemployment and a little better with wage growth” Andrew said. “We have a heavy alliance on manufacturing and construction. I think that should give us a lift in 2019.” 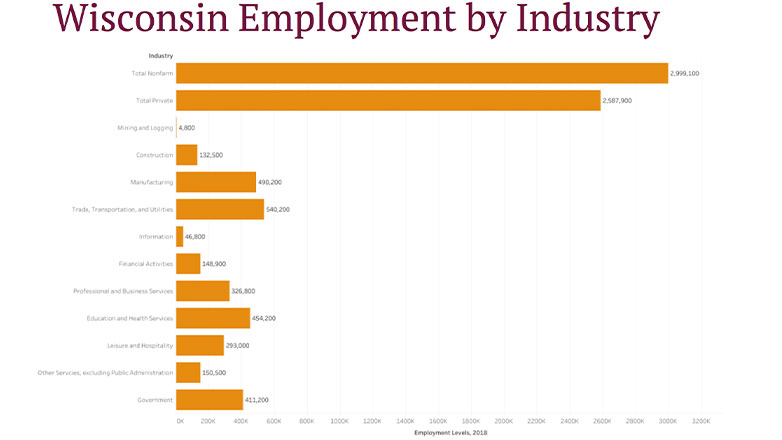 Still, other segments of Wisconsin's economy could begin to suffer in 2019.

The tariffs President Donald Trump placed on steel and aluminum imports from China in March could continue to cost the state's manufacturers.

Trading partners like China and Mexico have placed their own taxes on United States agricultural products, hurting Wisconsin's agricultural industry, which will continue in 2019, Andrew said.

“In Wisconsin, the place that will be most affected (by tariffs) will be the agricultural sector,” Andrew said.

Another reason Wisconsin will likely see a slight slowdown in economic growth this year is corporations won't be getting the corporate tax cut they received in early 2018, Andrew said.

“That is the most interesting to think about and see,” he said. “I think our view today is while the economy and growth rate may be slow, with the pace we are coming out of for the last two years, I really don't see a recession, certainly not in the state of Wisconsin.”