Is Bitcoin Here to Stay? An Assessment of Opportunities and Risk

Among the most topical issues in the world of both finance and pop culture is Bitcoin. Perceptions of Bitcoin vary widely, with some believing it represents the future of global commerce and others convinced it can only end ruinously for anyone involved. What follows is intended to provide a general introduction without being comprehensive or technical.

The Bitcoin network is a digital creation established by a pseudonymous individual or group, whose ambition was to establish a medium of exchange beyond the control of any single entity or government. From this concept the Bitcoin network was born, a software protocol of interconnected computers operating together to facilitate activity on the network and maintain a permanent public record of transactions. There is no single owner or operator of the Bitcoin network, much the same as there is no single entity which owns or operates the internet. Anyone with an internet connection, anywhere in the world, can transact on the network with anyone else.

Functioning on the network as its native currency are bitcoins, digital tokens which can be transmitted at will between network participants. A maximum of 21 million bitcoin were programmed at the inception of the network, and at the time of this writing, approximately 18.7M bitcoin have been created. Creation of new bitcoin occurs daily via a process known as mining, steadily awarding new bitcoin to the participants powering the network. As shown below, the release of new bitcoin occurs at a predetermined and steadily declining rate, with the final bitcoin scheduled to be mined around 2140. 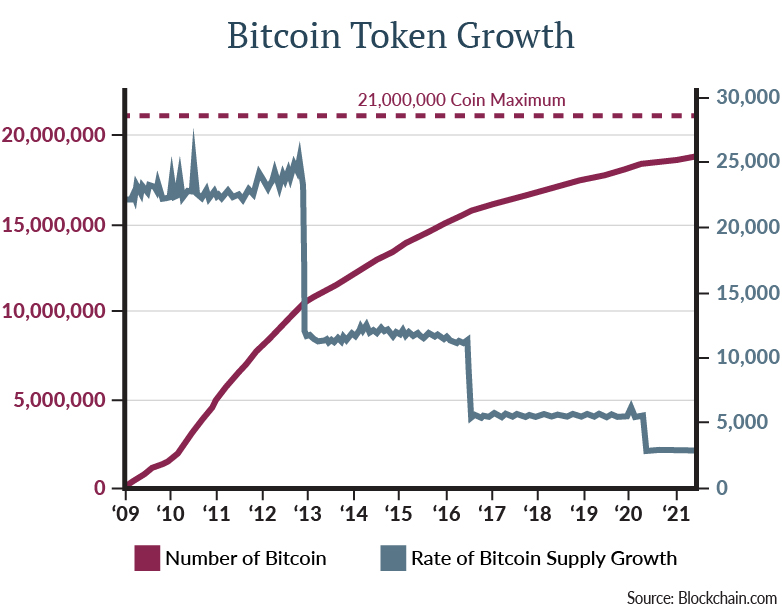 Initially viewed as a payment network or a currency, supporters have evolved their use case arguments for bitcoin over its 12-year lifespan. As currently designed, potential transaction volume suffers from structural limitations which make bitcoin impractical for widespread global transaction use. This has led supporters to reposition bitcoin as digital gold; a valuable item used as a store of value as opposed to a medium of exchange. In support of that claim, supporters remark on the following properties:

In addition to the characteristics shared with gold, bitcoin offers additional attributes as well:

In the author’s view, the strongest argument for bitcoin ownership is for the small possibility that it fulfills its great potential and becomes a globally accepted asset. It should be viewed as a high risk, growth asset which carries the potential of extensive volatility and possibility of complete loss.

The case for bitcoin is not without its issues, however. The clearest of these arguments is that bitcoin produces no cash flows and has no intrinsic value, making determination of fair value difficult, if not impossible. The value of bitcoin endures merely as a social construct, a tacit agreement amongst users that ownership today will confer value tomorrow. The continued growth of participants strengthens the network and yet a sense of fragility remains. Commonly cited risks and reasons for pause include: 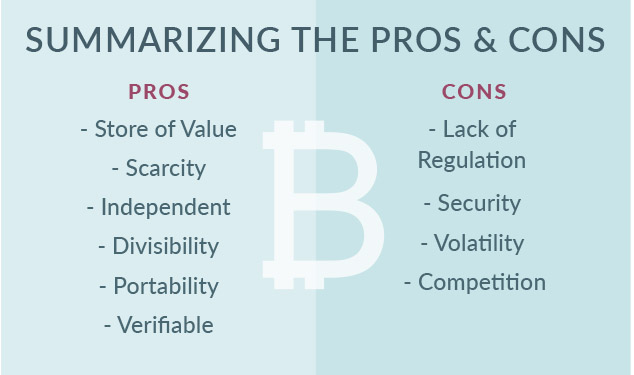 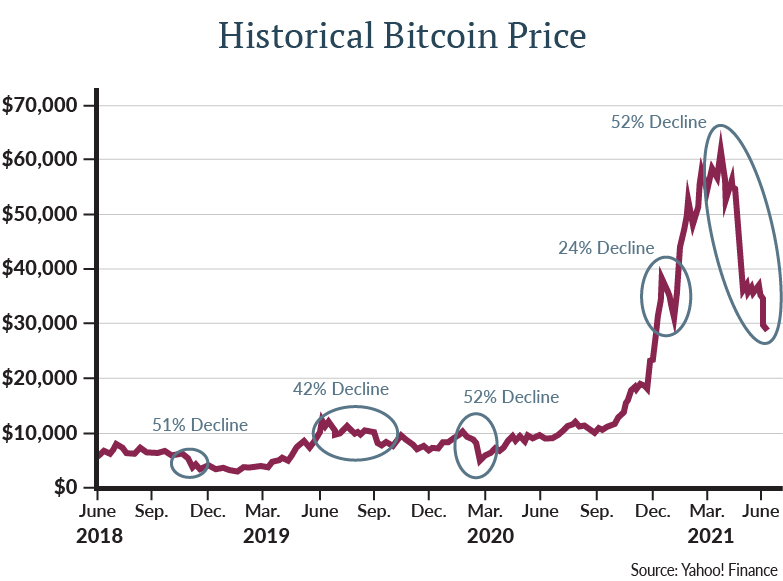 After considering the opportunities and risks, some may choose to purchase bitcoin. The vehicles to gain exposure to bitcoin have grown since it last rose to prominence in late 2017. At that time, few institutionalized platforms existed, but in the ensuing years the financial industry has been working to build the infrastructure for professionalized and secure ownership. Exposure to bitcoin can be achieved in the following ways:

Direct – Accounts can be created at one of a wide number of platforms which function similar to a traditional brokerage account. Selection of a reputable platform is critical, as is understanding the security measures necessary to protect and store the digital asset. Investors can purchase bitcoin with a modest minimum investment.

Predicting the future for bitcoin is a task even more challenging than most financial predictions. The camps of believers and naysayers are firmly rooted in their views that it will either “go to the moon” or “go to zero.” An allocation to bitcoin is likely unsuitable for most investors given the level of uncertainty which remains. Aggressive investors enticed by bitcoin’s prospects to supplant gold as a global store of value and gain widespread adoption across investment portfolios might consider a modest allocation, but only after acknowledging the distinct risk involved. A lack of traditional custodial solutions means that at the present time Johnson Financial Group is not allocating on behalf of clients, though we’re happy to discuss the rationale for owning.

One thing for certain is that the road ahead for bitcoin is unlikely to be boring. Whether that is a good thing for investors remains to be seen.

As seen on ValueWalk.com