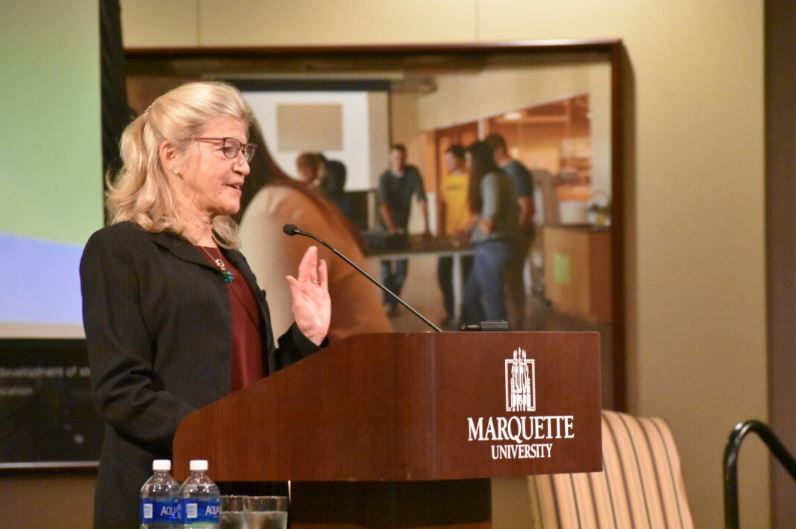 One of Wisconsin’s eight billionaires spoke Tuesday afternoon at Marquette University to share her thoughts on running a successful family business.

Johnson-Leipold is the great great granddaughter of Samuel Curtis Johnson Sr., the founder of Racine-based S.C. Johnson, a manufacturer of household cleaning supplies and other consumer chemical products. S.C. Johnson was founded in 1886. The company remains privately held and is still owned by the Johnson family. Johnson-Leipold’s brother, H. Fisk Johnson, is the company’s CEO, the fifth generation of the family to lead the business. Johnson-Leipold is a member of S.C. Johnson’s board of directors.

Johnson-Leipold said that within her family, having a core set of unwavering values and a commitment to serving the community have helped them remain successful.

“Our purpose is to keep our company healthy and thriving so we can continue to have a positive impact on the lives of more people in more communities for generations to come,” she said. “Our purpose takes us beyond ‘What’s in it for me today?’ to ‘How do we assure value creation and positive impact that builds over time?’”

This purpose has served as the inspiration and guidance for all generations of Johnson-Leipold’s family, she said. Having a business that is set for long term success is already a difficult task without adding in the desire to transfer that business on to the next generation. Thirteen members of the next generation are involved in one of the Johnson family’s businesses in some capacity.

Johnson-Leipold said her family has been so successful at generational transfers because each incoming generation is expected to bring something new to the enterprise to propel it forward. Change is a given within their family and inclusion and respect for all is expected.

“When you think of family businesses, we’re not one of the family businesses that gets stuck in tradition. Each generation was expected to bring fresh thinking…to understand our markets and consumers intimately as they change with the times,” Johnson-Leipold said.

Who’s running the family businesses is not the only thing that has changed over the years. Johnson-Leipold said her family has also had to tackle modern issues including remote work and the differing ideologies of up-and-coming generations.

“Millennials are serious when they say having a life is more important than a job,” Johnson-Leipold said. “Things should change. We’ve lived and breathed our jobs no matter what and that was a generational thing.”

To address the desire of the modern workforce to continue remote work, Johnson-Leipold says she has taken on a hybrid approach. For the foreseeable future, she’s been offering employees a two-day a week remote option. However, she still believes in the power of having an “in person culture.”

Johnson-Leipold said she has seen a shift in philosophy taking place over the past several years in terms of what it means to be a good business leader and run a strong company. Even within the last decade, focusing on value and purpose-based philosophies were not considered “hardcore” business strategies. In fact, many business leaders believed they could hurt the bottom line.

Purpose and values have now become some of the most discussed topics amongst business leaders. Johnson-Leipold attributes this change to the next generation of the workforce.

“The younger generation has called us out about how we think about things and asking for change,” she said.